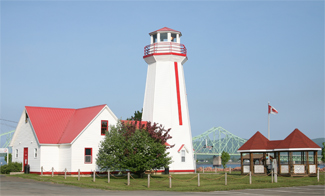 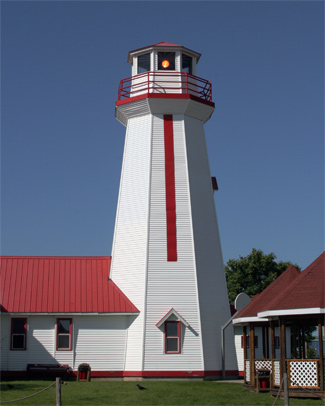 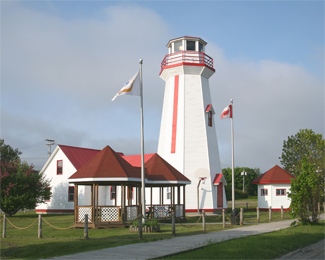 In 1985, the City of Campbellton received permission to occupy the land surrounding the Campbellton Range Rear Lighthouse and proceeded to incorporate the existing steel, skeletal tower into an octagonal lighthouse with an attached dwelling that operated as Campbellton Lighthouse Hostel part of Hostelling International, for many years.

The first set of Campbellton Range Lights were built in 1879 by Peter Naduux of Dalhousie, who received a $762 contract to erect six small, square towers, twenty-two feet in height. Two of the towers, which displayed fixed white catoptric lights, were placed at Campbellton, two at Dalhousie, and two across the Restigouche River at Oak Point in Quebec. The first keeper of the Campbellton Range Lights was George Cummings, who received an annual salary of $100.

The front light was displayed from the railway wharf. In 1895, the rear range tower was moved from Moffats Wharf to Kilgour Shives wharf, and in 1900 it was raised fifteen feet by installing a cribwork block beneath it. The color of the range lights was changed from fixed white to fixed red in 1898 so they could be distinguished from the incandescent lights used on the wharves.

In 1902, Campbellton had a population of 2,652, and functioned primarily as a lumber port, with over twenty-four million feet of lumber being shipped from its wharves that year.

By 1917, the original rear tower was replaced by a light on a pole, which had a shed at is base and displayed a triangular, slatted daymark. A utilitarian square, steel tower later replaced the square front tower, and Campbellton lost its final historic lighthouse.

Campbellton Range Lights were deactivated in 2013, and the hostel closed after the summer of 2016 because it was running an annual deficit. The city had provincial and federal funding to hire students to work at the hostel, but it became harder and harder to find experienced students to staff the hostel who were willing to spend the night with total strangers.

Located at 1 Ritchie Street in Campbellton on the bank of the Restigouche River near the Van Horn bridge linking New Brunswick and Quebec.
Latitude: 48.01002, Longitude: -66.67201

For a larger map of Campbellton Range Rear Lighthouse, click the lighthouse in the above map.

From Highway 11 in Campbellton, take Exit 412 and then drive north, towards the river, on Salmon Boulevard Extension. When this road ends, turn left onto Ramsey Street (Route 134). Route 134 makes a left just before the river and becomes Water Street. Shortly after making this turn, make a right onto Ritchie Street, which will take you to the lighthouse. Note: Salmon Boulevard, which runs in front of the lighthouse, is divided by a median with no access. The lighthouse was formerly a hostel that was open to guests in the summer.