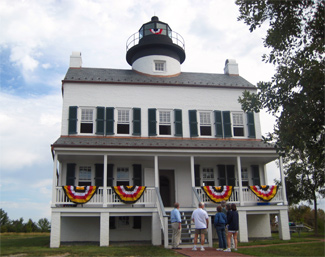 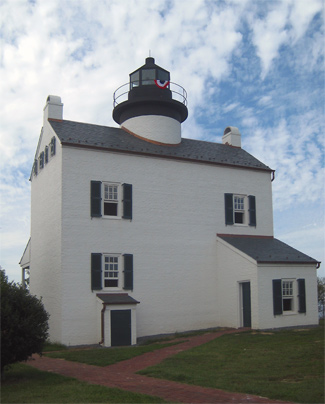 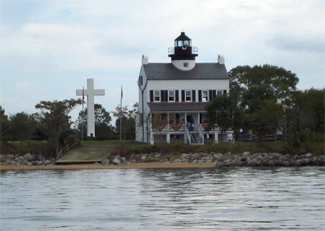 Called Marylands Plymouth Rock by some, St. Clements Island was the site of the first landing of colonists in Maryland, an event that occurred on March 25, 1634. The group left England on the feast day of St. Clement, patron saint of mariners, and so bestowed the saints name on the island. They didnt remain on the 455-acre island long though, choosing instead to establish St. Marys City on the mainland.

A few of the colonists, however, did eventually settle on the island. One of these was Dr. Thomas Gerard, who gave the island to his daughter Elizabeth upon her marriage to Nehemiah Blackistone in 1669. The island would remain in the Blackistone family for over 150 years.

Situated in the Potomac River, the small island served several purposes during the formative years of the United States. During the Revolutionary War and the War of 1812, the British gained control of the island and used it as a base for raiding nearby plantations and for attempts at blockading the river and Chesapeake Bay.

On August 14, 1848, Congress appropriated $3,500 for building a lighthouse on Blackistone Island and followed this up with another $1,500 on September 30, 1850 to complete the structure. John Donahoo, who was known for his quality work and reasonable rates, was contracted to build the lighthouse and would eventually build over a dozen beacons on the shores of Chesapeake Bay and its tributaries. Most of Donahoos lighthouses took the form of a conical tower, but Blackistone Lighthouse consisted of a two-and-a-half-story residence with a short tower protruding through the center of its pitched roof.

Isaac Wood was hired as the lighthouses first keeper and was initially responsible for minding the eleven oil lamps, set in fourteen-inch reflectors, that were used to produce a fixed white light at a focal plane of forty-six feet above the river. A fourth-order Fresnel lens replaced the array of lamps and reflectors in 1856, when George Hackett was serving as keeper.

During the Civil War, Confederate forces planned to destroy the lighthouse to keep it from aiding Union forces. When Keeper Jerome McWilliams learned of the plan, he plead with the Confederates to spare the structure as his wife was close to childbirth and moving her off the island would endanger both her life and that of the unborn child. The Confederate officer had compassion on the couple and instead of tearing down the lighthouse opted to confiscate the supply of oil and destroy the lantern and lens. This incident occurred in May 1864, and a new lantern was installed later that year.

In October 1880, a fog bell was placed atop the southwest corner of the lighthouse, with machinery for tolling it every sixteen seconds. This configuration was used until 1888, when a twenty-foot-tall, detached fog-bell tower was erected thirty feet west of the lighthouse. In December 1900, the decayed fog-bell tower was replaced by one of the same dimensions, and in 1913, an oil house, built of reinforced concrete and equipped with iron doors and ventilators, was built on the island.

The winter of 1917  1918 caused unprecedented erosion on St. Clements Island, forcing the Lighthouse Service to place 400 tons of riprap stone on the island to restore the existing shore protection that had been displaced by ice and storms.

Blackistone Lighthouse was decommissioned in 1932, and twenty-four years later a shell from the nearby Naval Proving Ground reportedly exploded near the abandoned lighthouse and set it afire. The Navy later razed the walls of the charred structure.

Leonard H. Staubly was the last keeper of the lighthouse and spent twenty years on the island. C. Ward Nicklin, an avid outdoorsman from Martinsburg, West Virginia and a friend of Keeper Staubly, would hunt and fish from Cacapon to Blackistone Island. Robert Nicklin contributed this photograph of his grandfather and Keeper Staubly after a successful day of fishing on the Potomac River - Keeper Staubly is on the right.

The McWilliams familys connection to Blackistone Lighthouse didnt end with the Civil War as Josephine McWilliams Freeman minded the light from 1875 to 1912, and it was $5,000 willed by Josephines granddaughter, Mary Josephine Mattingly, in 1998 that provided the seed money and inspiration to rebuild the structure.

A group called the St. Clements Hundred was soon formed to raise the additional funds needed to rebuild the lighthouse. St. Marys County commissioners allocated $90,000 towards the project, and the State of Maryland contributed $275,000 in matching funds.

Don Cropp, owner of Colony Builders and project manager, was key in seeing the project completed. We took great pains to build an exact replica of the original lighthouse, Cropp said. Original drawings and specifications along with old photos were followed precisely. One example of this is that the specifications called for eighty eighteen-inch Loblolly pines to be used for the beams in the floors and ceilings. We found a stand of these trees and had them cut then milled at a local Amish saw mill.

Work on the lighthouse commenced on April 13, 2007, with Maryland Rock providing the barges to transport a total of three hundred tons of materials to the island. Due to the primitive state of the island, all the supplies had to be offloaded by hand or with a skidder, and the cement used in the lighthouse was mixed by hand and transported to the site by wheelbarrow.

The replica lighthouse was completed in June 2008 thanks to the efforts of an army of volunteers and generous donations from individuals and corporations. A dedication ceremony was held shortly thereafter on Sunday, June 22 for invited guests and featured talks given by Dick Gass, President of the St. Clements Hundred, and former Maryland Governor Marvin Mandel. The Blackistone Lighthouse Foundation is now responsible for the lighthouse.

For a larger map of Blackistone Island (Replica) Lighthouse, click the lighthouse in the above map.

Water Taxi tours to St. Clements Island are available on weekends starting in June and continuing through the September. Tours depart from the St. Clement's Island Museum located on the eastern shore of the Potomac River.

The lighthouse is owned by Maryland Department of Natural Resources. Grounds/dwelling open in season.