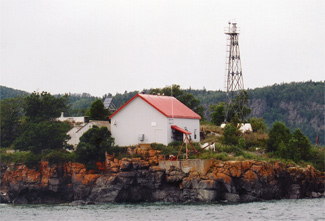 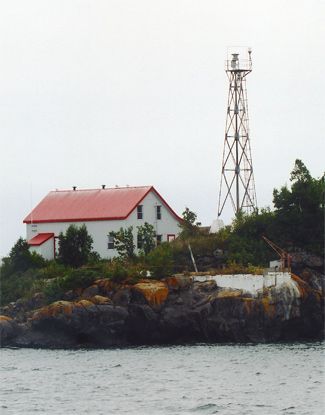 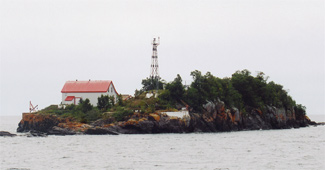 The Sibley Peninsula, with its distinctive Sleeping Giant rock formation, forms the eastern side of Thunder Bay, and in 1874, Thunder Cape Lighthouse was built at the southern tip of the peninsula to guide mariners into Thunder Bay. Thunder Cape Lighthouse was staffed until 1924, when its light was automated and its keeper transferred to the newly constructed lighthouse on nearby Trowbridge Island. The eleven-kilometre-wide entrance to Thunder Bay lies between Trowbridge Island, located just east of Thunder Cape, and Angus Island, situated just east of the much larger Pie Island. The Canadian government planned to place a lighthouse and fog alarm on Angus Island in 1920, but the work wasnt carried out until seven years later. The following description of the new lighthouse, built under a $14,800 contract awarded to Kust Justin of Port Arthur, was published in the Annual Report of the Lake Carriers Association for 1927:

The new light and fog signal station on Angus Island was placed in commission on November 21, 1927. The new lighthouse is a white, square, wooden building surmounted by white wooden lantern with red roof, located near north end of island, west side of entrance to Thunder Bay. The light at an elevation of 70 feet, is flashing white, showing one flash every 30 seconds.

The fog signal station is a white, square, wooden structure and stands about 50 feet southeast of the lighthouse with horn pointing southeastward. The fog signal is an air diaphone operated by oil engines and sounds one blast of 2 ½ seconds duration every 30 seconds, thus: Blast 2 ½ seconds, silent 27 ½ seconds.

In 1928, the characteristic of the light was changed to a white flash every twenty seconds, and in 1943 a radiobeacon with call sign V.B.J. was established on Angus Island. The present thirty-four-foot-tall skeleton tower, supported by four concrete piers, was erected in 1967.

The first keepers of Angus Island Lighthouse were delivered to and from the station by boat up until 1961, when the icebreaker Alexander Henry was equipped with a helicopter to shuttle keepers and their families to the various stations on Lake Superior. The new system of delivering was touted in the local paper in the spring of 1961:

The whirligig system delights the keepers. Gone are the days when they and their supplies were put ashore and left by bullwork and laborious drudgery to get their gear up the rocky, ice-encrusted precipices as best they could.

Now, as the Alexander Henry without stopping continues her business of breaking ice, the helicopter simply stakes off from the flight deck making trip after trip from ship to shore ferrying first the supplies and next the people. Its all accomplished as slick as a whistle. The entire smoothly-functioning operation is as painless as you please and a remarkable example of efficiency.

While the keepers enjoyed coptering to their stations the same wasnt always true of their families. When helicopter pilot Bob Jones ferried Mrs. J. Morgan and her six-year-old son Richard out to join Keeper Morgan on Angus Island, young Richard was quite apprehensive of the whole performance. Just days before, Keeper Thomas Haywood and his wife became the first persons to be delivered by helicopter to a Thunder Bay lighthouse, when they were placed on Angus Island.

In later years, a helicopter shuttled the keepers to and from their stations directly from the City of Thunder Bay. Angus Island Lighthouse was destaffed at the close of the 1988 navigation season, but its skeletal tower continues to welcome mariners to Thunder Bay with a white flash every ten seconds.

In 1900, the Algoma Central Railway purchased four freighters from England for use on Lake Superior: the Theano, the Leafield, the Monkshaven, and the Paliki. Interestingly, three of these vessels were wrecked at the entrance to Thunder Bay before the establishment of lights on Trowbridge Island and Angus Island. The Monkshaven grounded on Angus Island during the Mataafa storm in November 1905, and the Theano struck rocks near Trowbridge Island and sunk on November 17, 1906. A wrecking crew released the Monkshaven from Angus Island the following year, but it slipped it moorings shortly afterward, hit the rocks again, and became a total loss.

No lives were lost with the Theano and Monkshaven, but such was not the case with the 269-foot Leafield, which went down with a crew of eighteen after striking rocks off Angus Island during the Great Lakes Storm of 1913. The ferocity of this storm was described by the Lake Carriers Association:

No lake master can recall in all his experience a storm of such unprecedented violence with such rapid changes in the direction of the wind and its gusts of such fearful speed. Storms ordinarily of that velocity do not last over four or five hours, but this storm raged for sixteen hours continuously at an average velocity of 60 miles per hour, with frequent spurts of 70 and over. Obviously, with a wind of such long duration, the seas that were made were such that the lakes are not ordinarily acquainted with. The testimony of masters is that the waves were at least 35 feet high and followed each other in quick succession, three waves ordinarily coming one right after the other. They were considerably shorter than the waves that are formed by an ordinary gale. Being of such height and hurled with such force and such rapid succession, the ships must have been subjected to incredible punishment. Masters also related that the wind and sea were frequently in conflict, the wind blowing one way and the sea running in the opposite direction. This would indicate a storm of cyclonic character. It was unusual and unprecedented and it may be centuries before such a combination of forces may be experienced again.

While lights and fog alarms on Trowbridge Island and Angus Island may not have prevented the loss of these three vessels, their sinking certainly emphasized the need for better navigational aids to mark the entrance to Thunder Bay. As of 2014, the Leafield is one of four of the twelve vessels lost during the 1913 storm yet to be located.

For a larger map of Angus Island Lighthouse, click the lighthouse in the above map.

Angus Island Lighthouse is best seen from the water. Great Lakes Lighthouse Keepers Association occasionally offers cruises to Isle Royale that may pass by this lighthouse.