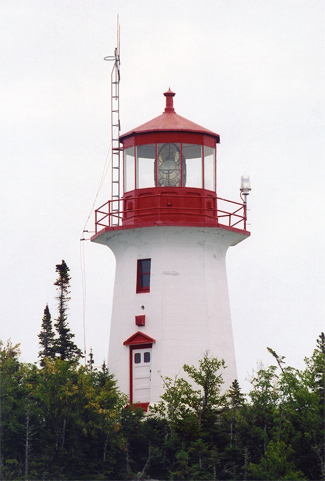 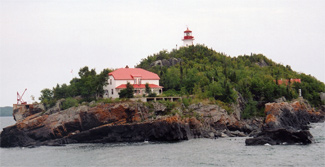 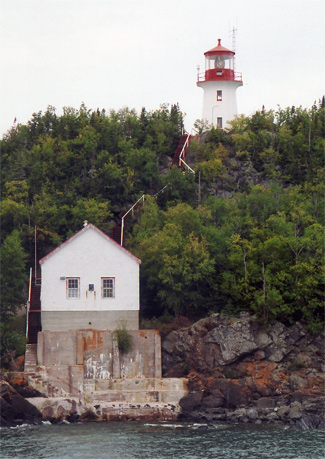 The Sibley Peninsula, named for Alexander H. Sibley, president of a company that developed a mine there, forms the eastern side of Thunder Bay, a spacious anchorage on Lake Superiors northern shore. The southernmost portion of the peninsula is home to a towering rock formation that resembles a recumbent man with his arms folded across his chest, and in 1944, the majority of the fifty-two-kilometre-long peninsula was set apart as Sleeping Giant Provincial Park.

A string of islands, the southernmost of which is Trowbridge Island, parallels the southeast shore of Sibley Peninsula, threatening vessels attempting to make the eleven-kilometre-wide entrance to Thunder Bay bounded by Trowbridge Island and Angus Island. In November 1906, the 255-foot Canadian steamer Theano, bound for Thunder Bay with a cargo of steel rails sufficient to lay sixteen kilometres of track, was pushed off course and into the rocks off Trowbridge Island by a fierce blizzard packing fifty-mile-per-hour winds. Captain George Pearson described the ordeal:

A rock suddenly loomed up directly in front of us, and although we at once reversed our engines, we had discovered our peril too late. After several futile attempts to release the ship, we manned the lifeboats and awaited developments. Time after time the waves threw the stern of the vessel against the rock, and it seemed that every lunge of the craft would be its last. Holes were knocked into its side and it was otherwise damaged. In this precarious position we were kept for more than 2 hours, when the boat began to fill and rapidly settle. The sailors behaved admirably. We held a hurried consultation and decided to cast our fate on the lake in lifeboats. It was almost certain death to remain with the ship, and we were not likely to survive in the smaller craft. There were 9 in our boat and 11 in the other. Once clear of the steamer we hoisted a sail and went to work with oars. Each lifeboat carried a light, and although we managed to keep ours burning we lost sight of the other within an hour of the time we set sail.

The trip across Thunder Bay was the most terrible I have ever experienced. One minute we were 20 feet below the surface and the next we would be on the crest of a gigantic wave, with the bow of our boat pointing downwards. Again a wave would break over us, drenching every man to the skin. At times it was impossible to see the men in the opposite end of the boat and it was only during the lulls, which came infrequently that we were able to assure ourselves that no one had been washed overboard. Numbed, exhausted, and almost overcome with exposure we arrived in Port Arthur about 11:00 AM. I am sure we could not have survived another 6 hours.

On August 9, 1923, nearly seventeen years after the loss of the Theano, work finally began on a light and fog alarm on Trowbridge Island. J.J. Fitzpatrick of Sault Ste. Marie was awarded a $17,892 contract for building the lighthouse, fog alarm building, and dwelling, while Fairbanks-Morse Company and Ingersoll-Rand Company, both of Montreal, provided the fog alarm equipment.

A thirty-nine-foot-tall octagonal tower, built of reinforced concrete and topped by a red lantern room, was placed on the summit of the island. Inside the lantern room, a third-order, Chance Brothers Fresnel lens slowly revolved around an oil-vapour lamp, producing a white flash every five seconds at a height of 114 above the lake. When needed, the fog alarm would boom out a group of two blasts each minute in this manner: two-and-a-half-second blast, ten seconds of silence, two-and-a-half-second blast, forty-five seconds of silence. The characteristic of the fog alarm was changed in 1928 to sound two three-and-a-quarter-second blasts each minute.

With the completion of Trowbridge Lighthouse, the light at Thunder Cape, the southern tip of Sibley Peninsula, was automated, and Allan Murray, its keeper, was transferred to Trowbridge. Keeper Murray and his assistant lived in the duplex near the western end of the island and accessed the lighthouse by a wooden stairway with 175 steps that snaked up the centre of the island. The stations isolation was evidenced in December 1928, when a tug had to be hired to convey a wire to Keeper Murray announcing the death of his sister.

Simeon Merritt, a veteran of World War I, replaced Murray as head keeper in 1931 and was in charge of the station until 1947. Merritts step-daughter Joyce married Alex Kerr, a lighthouse keeper, and she returned with him to her childhood home on Trowbridge in the early 1960s. The final keeper of the lighthouse was Orton Rumley, who left the island in 1988.

Maureen Robertson talked the Coast Guard into allowing her to live at Porphyry Point Lighthouse starting in 1994, but after three years there and several encounters with the islands black bears, she opted to spend her summers at Trowbridge Island Lighthouse instead. Resident keepers had left Trowbridge nearly a decade earlier, and when Maureen arrived the dwellings front door wouldnt close and its walls were in dire need of paint. With treasures shed discovered at yard sales and thrift stores, Robertson decorated the eight-room dwelling in an eclectic manner. One bedroom, dedicated to the Royal Canadian Mounted Police, featured fur blankets and a pair of wooden snowshoes, while another was filled with thirty-eight brightly coloured Teletubby dolls. The kitchen décor was inspired by a trip she took to Egypt, and another room had a post-office theme with photographs of various heads of state, including a signed portrait of Ronald Reagan.

Robertson summered on Trowbridge Island for fourteen years until deciding to call it quits in 2010 when the government decided to offer the lighthouse to interested parties as part of the Heritage Lighthouse Protection Act. Drafting a petition, collecting signatures, and jumping through the necessary hoops to continue as the islands official caretaker seemed like too much work for the seventy-six-year-old. When the helicopter pilot came to retrieve her at the end of her stay in 2010, she declined his offer to circle the island one last time and told him to get her out of there fast. Once inside her mobile home in Thunder Bay, Robertson let herself cry to ease the pain of leaving her cherished summer home that had been like a child to her.

Friends of Trowbridge Lightstation was formed in 2010 to care for the station, and Diane Berube and her son Ben lived on the island for a couple of summers, welcoming visitors and performing upkeep. In November 2013, the Canadian Coast Guard terminated its agreement for occupation with the group due to dry rot that had made the entire main floor of the duplex unsafe. The Coast Guard subsequently boarded up the doors and windows of the residence and posted Danger  Keep Out signs.

Canadian Lighthouses of Lake Superior was formed in 2014 to restore lighthouses along the north shore. To date, the group has made significant progress at Porphyry Point and Shaganash Island, and it plans to expand its efforts to other lighthouses in the area. In early 2016, Canadian Lighthouses of Lake Superior was given a lease to operate Trowbridge Island for that year. This did not include the main house, but the grounds and other buildings may be open to welcome visitors. Work on assessing the site and some light activity will take place during the summer months.

Located on Trowbridge Island, at the entrance to Thunder Bay and just off the southern end of Sibley Peninsula and Sleeping Giant Provincial Park.
Latitude: 48.29231, Longitude: -88.87508

For a larger map of Trowbridge Island Lighthouse, click the lighthouse in the above map.