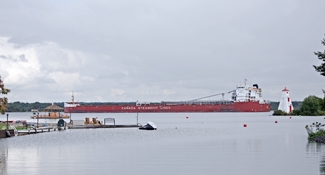 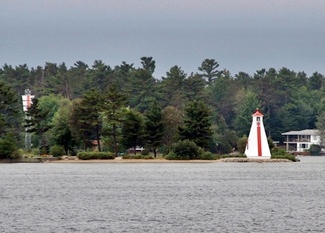 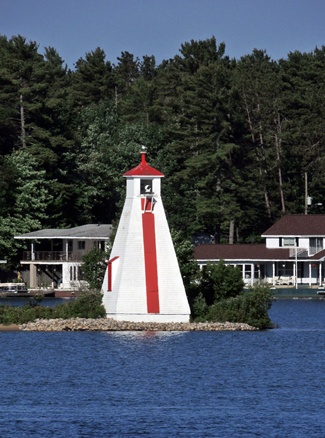 Pointe aux Pins, French for Pine Point, is located at the eastern end of Lake Superior, just eight kilometres (five miles) upstream from where the Soo Locks were established in 1855, bypassing the rapids on the St. Marys River and making navigation between Lake Superior and Lake Huron possible. Before the locks were finished, ships that sailed on Lake Superior had to be built on its shores or portaged around the rapids. A historical plaque indicates that Pointe aux Pins was the site of Lake Superiors first shipyard:

The first decked vessel to sail Lake Superior was constructed near this site on Pointe aux Pins in 1734-35. It was used by Louis Denis, Sieur de la Ronde, during an unsuccessful attempt to establish copper mines on the southern shore of the lake. Alexander Henry, one of the leading fur traders during the early years of the British regime, built a barge of 14 tons in 1770 and in August, 1772, launched a sloop of 40 tons. These vessels transported supplies to a short-lived copper mine developed by Henry and his associates near Point Mamainse.

A contract for the construction of a lighthouse on Pointe aux Pins was awarded in 1872, and the next year the Department of Marine provided the following description of the new light:

A new lighthouse of a minor class was erected during last season at Point aux Pins, on St. Marys River, a few miles above Sault Ste. Marie, at the eastern entrance of Lake Superior, and the light was exhibited in it for the first time on the 6th September last. The tower is a square wooden building, painted white, and the light is a fixed white catoptric light, consisting of four mammoth flatwick lamps, with 16-inch reflectors, and can be seen at a distance of eight or ten miles where not intercepted by the land. The total cost of its construction up to the 31st December, was $1,408.50. Mr. W. G. Foote was appointed keeper of it, with a salary of $150 per annum, on the 23rd September last.

The lighthouse stood twenty-three feet tall and exhibited its light at a height of thirty feet above the water.

Keeper Foote left the locality in 1883, and Henry Wood was appointed keeper in his stead at an annual salary of $200. In 1889, Keeper Wood was instructed to maintain a light at Footes Dock in the form of a lantern hoisted atop a twenty-foot-tall pole in addition to the light at Pointe aux Pins.

On May 5, 1893, Keeper Wood left his home at Sault Ste. Marie for Pointe aux Pins to place the light in operation for the season, but he never reached the lighthouse. Eugene ODonnell was placed in charge of the light in Woods place, and it wasnt until a year later that Keeper Woods remains were found near the mouth of Carp River, three miles from Pointe aux Pins. Though the cause of his death is uncertain, it is believed he became disoriented and died of exposure.

In 1902, the light shown from Pointe aux Pins Lighthouse, situated on the southern extremity of the point, was strengthened by substituting for the reflectors previously used extra large reflectors along the axis of the channel, up and down the river, and by adding a small pressed lens to exhibit a lesser light on other bearings. The next April, temporary range lights were displayed from two poles erected on the point until two enclosed towers were placed in operation September 28, 1903 to guide mariners up the reach from the locks. The following description of the points range lights, which operated in addition to the points main lighthouse, was published by the Department of Marine in 1903:

The front tower stands on the north extremity of the sand spit running northward from the lighthouse on the south extremity of Pointe aux Pins. The tower is 31 feet high from its base to the top of the ventilator on the lantern. The light is elevated 28 feet above the level of the river, and should be visible 4 miles in the line of range.

The back tower stands on the west shore of the little bay formed by the sand spit, and is 920 feet S. 54 1/2° W. from the front tower. It is 56 feet high from its base to the top of the ventilator on the lantern. The light is elevated 53 feet above the level of the river, and should be visible 4 miles in the line of range.

This range takes the place of a private range, maintained by Mr. Rouleau, pilot, a short distance further north, which was ordered discontinued when our temporary lights were established.

The salary of R.F. McKinnon was increased from $250 to $400, starting on April 10, 1903, when the additional work of keeping the range lights was entrusted to him.

Several changes were made to the main lighthouse over the years: a fourth-order lens was installed in 1919, a fog bell was placed on the towers balcony in 1928, and in 1949, its characteristic was changed from fixed white to fixed red.

The following appeared in the October 1960 edition of News on the DOT, the staff publication for the Department of Transport:

Theft of a 300-pound lighthouse bell in what the Sault Daily Star termed the unfunniest joke in Sault history cost five Sault Ste. Marie youths $165 each.

The youths removed the brass bell as a prank from the Point-aux-Pins lighthouse and dumped it 200 yards upstream. It was recovered later from four feet of water.

The warning bell, made of pure brass, was installed by the Department of Transport at the top of the lighthouse. Running on electricity, with a weight system to take over in case of power failure, the bell was set to ring every eight seconds, 24 hours a day, as a navigation signal to passing freighters.

On Sunday morning, June 26, a caretaker who checks the bell twice a day discovered that the lighthouse had been broken into and the bell removed. A wrench used to dismantle the bell was found in the tower.

Korah police, who joined forces with the RCMP in recovering the bell, said beer bottles and a great deal of litter strewn about the beach near the lighthouse indicated that quite a party had been going. The bell was found the following Tuesday afternoon.

It was slightly damaged, but not enough to interfere with its future use. Theft of the bell is punishable under the criminal code.

In a scalding editorial the Sault Daily Star compared taking the bell with stealing the white cane from a blind man and pointed out that, had fog arisen in the river and the absence of the bell led to the death of someone, charges of manslaughter could have been laid.

A red and white horizontally banded circular tower replaced the main light tower in 1970, and in 1983, a white skeleton tower replaced the wooden lighthouse used to display the rear range light. The Coast Guard was going to destroy the wooden rear range tower, but instead it was given to a local resident under the stipulation that it be lowered and rotated ninety degrees. The Pointe aux Pins Front Range Lighthouse is thus the only active historic tower on the point today.

For a larger map of Pointe aux Pins Range Front Lighthouse, click the lighthouse in the above map.

Pointe aux Pins Range Front Lighthouse is surrounded by private property and is best viewed from the water. Soo Locks Boat Tours offers a Lighthouse Cruise that passes near the lighthouse.