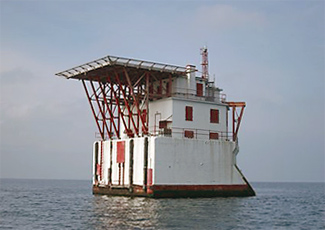 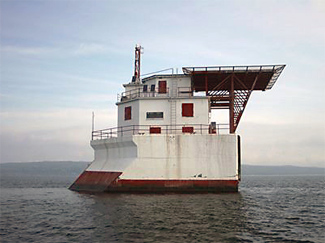 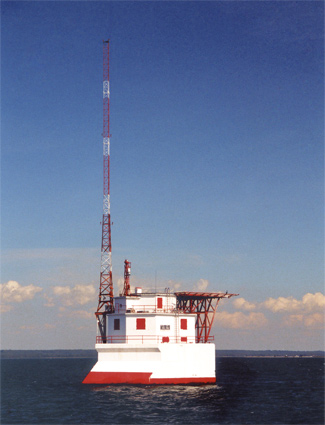 Roughly fifteen miles above Sault Ste. Marie, mariners transition between Lake Superior and St. Marys River. This important juncture is defined by Point Iroquois and its lighthouse on the American shore and Gros Cap, four miles away, on the Canadian shore. At Gros Cap, steep cliffs rise up out of the water to a height of three hundred feet, while dangerous reefs extend nearly halfway to the American shore.

In 1908, the Lake Carriers Association recommended that a lightship and fog signal be established at Gros Cap to replace a red gas buoy. A buoy had marked the reef since at least 1899, for in that year Joseph Ripley of the U.S. Corps of Engineers noted: The shoals off Gros Cap are a menace to navigation during foggy and stormy weather, and narrow the entrance to St. Marys River to about one-half of what it would be if the shoals were removed, but they are so extensive that the cost thereof would be prohibitive. Canada anchored a buoy on the reef in 1914, replacing one maintained for several years by the United States.

During World War I, the Royal Canadian Navy deployed twelve battle class trawlers including the HMCS St. Julien, which was built at Toronto by Polson Iron Works. After being commissioned on November 13, 1917, the 130-foot-long St. Julien saw service as a minesweeper in the North Atlantic. St. Julien was decommissioned in 1920, and like three of her sister ships, was converted into a lightship.

The Annual Report of the Lake Carriers Association provides the following description of the St. Julien being deployed as Gros Cap Reefs Lightship:

The vessel is of steel with two masts, hull painted red, with Gros Cap Reefs No. 22 in white letters on each side. A red ball is carried at the foremast head and if for any reason the light vessel is off her station this ball is lowered. A cluster of occulting white electric lights encircles the foremast, visible all around the horizon, elevated 35 feet above the water.

During thick weather a steam whistle sounds 1 blast of 10 seconds duration every minute.

After serving mariners for twenty-nine years, Gros Cap Lightvessel was pulled from its station in early December 1952, leaving the Huron Lightship as the last of its kind on the Great Lakes. Joseph Griffith had been serving as captain of Gros Cap Lightvessel for three years before the ship was replaced by what some of its older crewmembers called a new fangled lighthouse.

The following is an excerpt from an article on the removal of Gros Cap Lightship printed in Sault Ste. Maries The Evening News of December 9, 1952 :

For some, spending the long summer aboard a stationary ship in the middle of a wide river would be a boring experience. However, the regular crew of ten say that life was not unpleasant since there were always regular duties to perform daily and a cribbage game below decks could be arranged almost any time.

The new lighthouse, which replaces the Gros Cap has been in temporary service for approximately three weeks. Throughout most of the summer crews have been placing the heavy cribbing to form the base with much of the work to be completed before regular service is set up.

St. Julien might have been used as a lightship on the St. Lawrence River after being removed from Gros Cap Reef, but it was finally sold in 1958 and renamed Centennial.

When completed in 1953, Gros Cap Reef Lighthouse consisted of a concrete structure built atop a crib that was towed to the reef and sunk in place with rocks. The superstructure consists of a pier with an ice nose that points upstream to break up floes and a two-tier residence for the keepers. The modern lighthouse resembles a lake freighter with a pointed prow and a forward pilot house.

The conveniences of a helicopter landing pad and electricity supplied by a submarine cable were added to the lighthouse before it was destaffed in the 1980s.

Located on the southwest part of the reef, between Point Iroquois and Gros Cap and near the entrance to the St. Marys River from Lake Superior.
Latitude: 46.51213, Longitude: -84.61524

For a larger map of Gros Cap Reef Lighthouse, click the lighthouse in the above map.

A distant view of Gros Cap Reef Lighthouse is possible from the grounds of Point Iroquois Lighthouse, but the best views come from the water. Soo Locks Boat Tours offers a Lighthouse Cruise that passes near the lighthouse. For an aerial view of the lighthouse, try Mackinac Seaplane Tours.