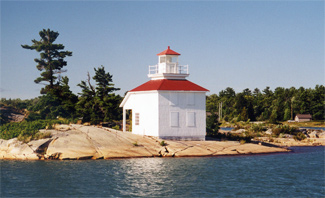 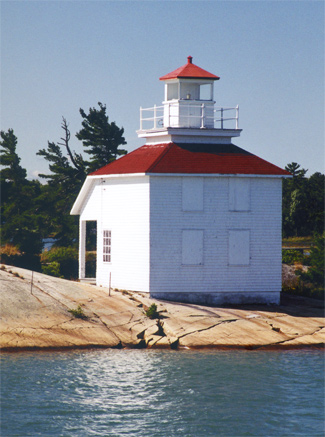 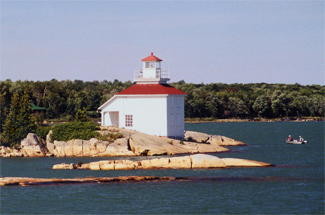 The St. Joseph Channel runs between the northern side of St. Joseph Island and the Ontario mainland, linking the North Channel with the St. Marys River. To help guide mariners along St. Joseph Channel, the Department of Marine hired John Waddell of Kingston in 1884 to build three lighthouses, one on Shoal Island, one at the head of Wilsons Channel, and one on North Sister Rock, along with two lighthouses on Manitoulin Island.

When Waddell failed to fulfill his contract to erect the lights for $9,023, the Department of Marine was forced to step in and complete the project at his expense.

Shoal Island lies roughly 200 metres off St. Joseph Islands Boulanger Point, but mariners were instructed to pass just north of Shoal Island rather than pass between the island and the point. Shoal Island Lighthouse was built at the northern tip of the island and originally consisted of a square, wooden tower attached to a dwelling. The lighthouse is located two miles upstream from Richards Landing and displayed a fixed white dioptric light at a height of thirty-seven feet.

Evan Rains was appointed the first keeper of the lighthouse at an annual salary of $250, and in 1904, he was provided a hand-operated foghorn which he used to answer the signals of vessels passing the station in thick weather. According to his great-nephew, Keeper Rains once wrote to the department asking for money, complaining that it was hard to keep a wife and five children on [his salary]. The department promptly replied that it didnt take a wife and five children to operate a lighthouse  so there was no raise in pay.

The original Shoal Island Lighthouse was destroyed by fire on May 30, 1909, which led to the construction of the current structure, a square wooden dwelling with a square tower rising from the centre of its hipped roof. Day labour, under the direction of D. Peterkin, was used to build the replacement lighthouse in 1909 at a cost of $1,493.22. The new fixed white light was produced by a seventh-order lens and had a focal plane of thirty-two feet.

Fred Rogers, who served as keeper of Shoal Island Light from 1937 until the light was made unwatched and the hand foghorn discontinued in 1954, was also responsible for other lights in the area. In the days of sailing vessels Keeper Rogers said, the boats ran close to the shoreline so range lights were not needed. But a lot of warning lights were. When these were lit with oil Id often get an urgent message in the night to come and re-light a beacon that had flickered out and left boats defenseless on the rocks.

Before being electrified, the various buoys and beacons had to be visited regularly, to be filled with oil, and to have their wicks trimmed and glass cleaned. Fred and Bella Rogers were a familiar sight along St. Joseph Channel, sailing to and from the lights aboard their boats Seadog I and Seadog II.

Two members of the Canadian Coast Guard were having lunch in Richards Landing one day, when they noticed in the Island Clippings, a local publication, that the St. Joseph Island Historical Society would be meeting that afternoon. The pair decided to attend and informed the group that in order to save maintenance costs the powers that be were considering tearing down Shoal Island Lighthouse and replacing it with a metal tower.

Inspired by this news, the historical society immediately contacted the St. Joseph Township Council, who in turn informed the Coast Guard in November 2007 that the township would be willing to accept title to the lighthouse provided any needed repairs were first made. The dialogue between the council and the Department of Fisheries and Oceans continued for some time, but no final decision regarding the future of the lighthouse was reached.

In November 2008, the township council received notice from Public Works and Government Services that Shoal Island Lighthouse had been declared surplus to Federal Government requirements and was being prepared for disposal. Though the disposal agency is aware of the desire of the St. Joseph Township Council to assume control of the property, a certain pecking order must be followed. Federal departments and agencies will be approached first along with the Province of Ontario, which will consider aboriginal title to the property. The township has certainly demonstrated interest in preserving the lighthouse and, being locally based, would make ideal custodians for the historic structure.

For a larger map of Shoal Island Lighthouse, click the lighthouse in the above map.

From Highway 17, 48 km (30 miles east of Sault Ste. Marie), turn south onto Highway 548, 20th Side Road, which leads to St. Joseph Island. Once on the island, take your first right onto D Line Road, and then turn right on Richards Street to reach the town of Richards Landing. In the town, turn left onto Russell Street and then right onto B Line Road. Shoal Island Lighthouse is visible just offshore from the end of B Line Road.

The lighthouse is owned by the Canadian Coast Guard. Ground/tower closed.