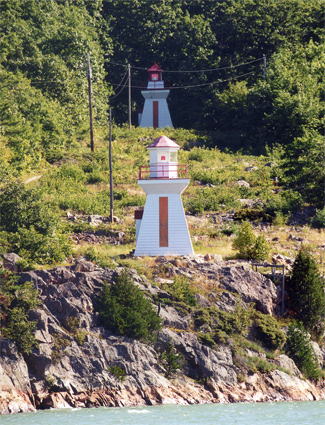 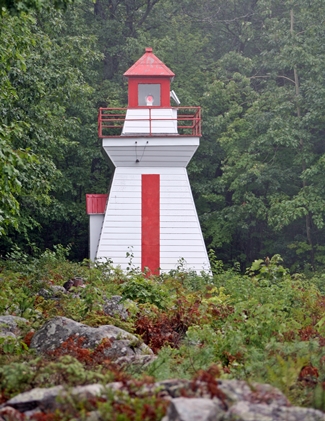 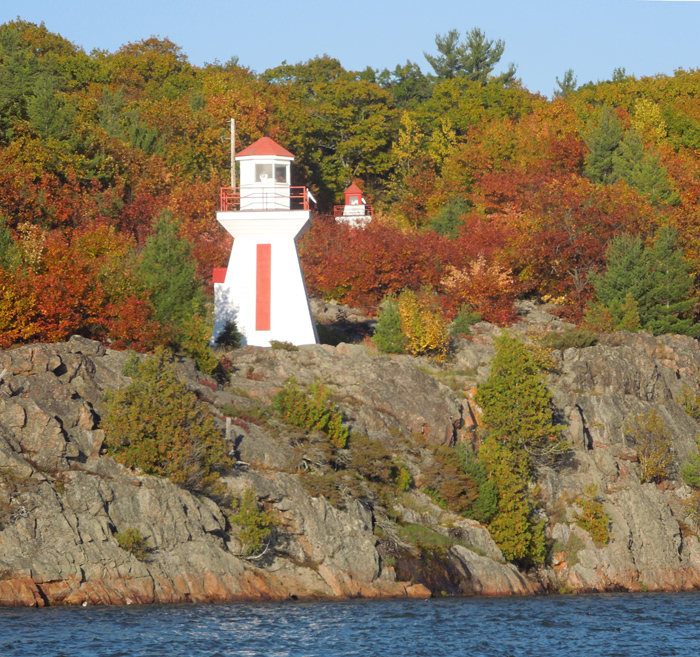 To help guide mariners along St. Joseph Channel, the Department of Marine hired John Waddell of Kingston in 1884 to build three lighthouses, one on Shoal Island, one at the head of Wilson Channel, and one on North Sister Rock, along with two lighthouses on Manitoulin Island. When Waddell failed to fulfill his contract to erect the lights for $9,023, the Department of Marine was forced to step in and complete the project at his expense.

The site selected for the lighthouse to mark Wilson Channel was Bamford Island, a rocky islet on the north side of the channel just west of Wilson Island, and the structure consisted of a square wooden tower, thirty-four feet tall, with an attached dwelling. As an additional aid for mariners, the Department of Marine, also erected the following structure in 1885 on a shoal just off the northwest tip of Wilson Island: a day beacon of crib-work, rising 4 feet out of the water, surmounted by an iron tripod, surrounded by hoops, and bearing on its top a globe of slatwork, elevated 17 ½ feet above the crib.

A. Brownlee was appointed the first keeper of Bamford Island Lighthouse, but he resigned after three years and was replaced by Robert Bamford. In 1896, Keeper Bamford was supplied a hand-operated foghorn and paid an extra twenty-five dollars each year to use it to answer the signals of vessels passing the lighthouse during thick weather.

The Department of Marine later decided that a set of range lights would be beneficial to help mariners keep a proper alignment at Wilson Channel. William Fryer of Collingwood was contracted to erect the ranges two towers in 1905 at a cost of $1,438, and the following Notice to Mariners was used to advertise the new set of lights:

Range lighthouses have been erected by the Government of Canada at Wilson Channel, St. Joseph Channel, in the district of Algoma, Ontario, and the lights will be put in operation on September 1, 1905.

The front tower stands on land 35 feet above the level of the water, on the main shore, on the site of the high beacon, which has been taken down.

It is an inclosed wooden building, square in plan, with sloping sides, surmounted by an octagonal wooden lantern, the whole painted white. It is 28 feet high from its base to the top of the ventilator on the lantern.

The light, elevated 58 feet above the level of the water, will be a fixed white light, and should be visible 3 miles from all points of approach by water. The illuminating apparatus is dioptric of the 7th order.

The back tower stands on land 86 feet above the level of the water, 730 feet N. 54° E. true from the front tower. It is an inclosed wooden building, square in plan, with sloping sides, surmounted by a square wooden lantern, the whole painted white. It is 28 feet high from its base to the top of the ventilator on the lantern.

The light, elevated 109 feet above the level of the water, will be a fixed white light and should be visible 3 miles in the line of range. The illuminating apparatus is catoptric.

The two lights in one, bearing N. 54° E. true lead down from Richards landing wharf to the turn in Wilson Channel, clear of Chicora shoal, through the dredged cut off Bamford Island lighthouse and clear of the shoals west of Wilson Channel.

H.G. Duncan served as the first keeper of Wilson Channel Range Lights from 1905 until 1912, when Robert Bamford, the keeper of Bamford Island Lighthouse, took charge of the range lights. Keeper Bamford passed away in October 1913, and Mrs. J.L. Bamford assumed responsibility of the lights until May 1, 1914, when Alfred Clark was appointed keeper of the range lights.

Residents and visitors had to take a ferry to reach St. Joseph Island until the current bridge was opened in 1972. The western end of the bridge is anchored to Bamford Island, where Bamford Island Lighthouse was apparently active until the close of the 1911 navigation season. The Wilson Channel Range Lights remain active and can be seen from the bridge to St. Joseph Island.

For a larger map of Wilson Channel Range Rear Lighthouse, click the lighthouse in the above map.

From Highway 17, 48 km (30 miles east of Sault Ste. Marie), turn south onto Highway 548, 20 Side Road, which leads to St. Joseph Island. Wilson Channel Range Lights will be visible to your left as you cross the bridge to the island.

The lighthouses are owned by the Canadian Coast Guard. Ground/tower closed.