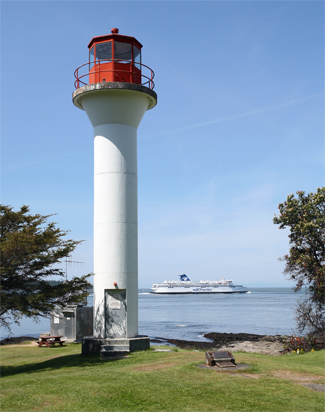 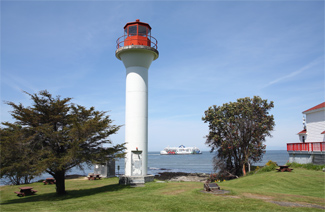 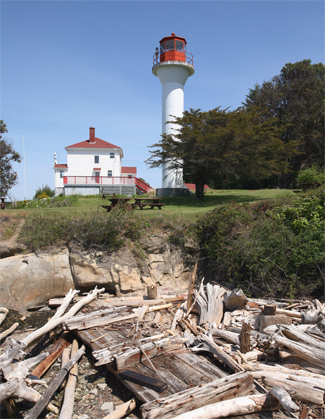 The sighting of the Active Pass Lighthouse from the deck of a BC Ferry bound for the Swartz Bay terminal on Vancouver Island from Tsawwassen on the mainland marks the beginning of a magical journey of timelessness along a waterway labyrinth lined with dark evergreen forests and rocky shorelines.

Here, in the gap between Mayne Island and Galiano Island, is a shortcut through the wall of the Gulf Islands, clipping ten miles off the journey between Southern Vancouver Island and the mouth of the Fraser River.

Before the arrival of steam-powered vessels, a journey through the pass required careful consideration of current and tide to avoid the rush of the water or lurking rocks. WIth its peaceful hidden coves anchoring a silent sailboat it isnt hard to imagine First Nation canoes or European oared boats that once plied the waters.

The name Active Pass seems quite fitting given the amount of marine traffic traversing it, but it was actually named for the United States Revenue and Survey Vessel Active, which, in 1855 while en route to Nanaimo to procure coal for her engines, was the first steamship to transit the pass. Originally a schooner-rigged vessel christened Goldhunter that brought fortune seekers around Cape Horn to San Francisco, the Active worked alongside the HMS Plumper in 1857 to survey the U.S./Canadian border, but her link to gold was not quite over.

While in Semiahmoo Bay, the officers of the Plumper arrested a white whiskey trader named Macaulay for attempting to sell alcohol to the survey crews and First Nations. The Active agreed to take the inmate to the Esquimalt Royal Navy base on her way back to San Francisco. Macaulay was dutifully dumped off at Esquimalt, but not before he flashed a large quantity of gold dust, which he had received in trade from the First Nations up the Fraser River. When the Active ported in San Francisco, the news quickly spread among disgruntled gold seekers, and in the spring of 1858 the Fraser Gold rush was on.

The mass influx of fortune hungry prospectors changed British Columbia almost overnight from a sleepy company territory of 900 residents to over 30,000. With Mayne Island being the halfway point between Victoria and the Fraser River, Active Pass became very busy indeed.

Among those seeking riches was Henry (Scotty) Georgeson, who at age fourteen, left his native Shetland Islands and ran away to sea. After traveling all over the world, he jumped ship in San Francisco and, contracting gold fever, made his way north to Victoria in 1858.

Scotty and his partner, George Buchanan, operated a stopping house at Beaver Pass on the pack trail to Barkerville until 1863, when Scotty sold his half interest for $2,500, and along with his First Nation wife, Elizabeth Sophia, settled on 146 acres on the southern end of Galiano Island. Five years later, he landed a position as assistant keeper at Sands Head Lightship at the mouth of the Fraser River.

By the early 1880s, increased shipping traffic along with a couple shipwrecks prompted the construction of a lighthouse at Active Pass, and nobody was better qualified to serve as its lightkeeper than Scotty Georgeson. He lit the light for the first time on June 10, 1885.

Georgina Point, the northern tip of Mayne Island where the lighthouse stands, forms the eastern point of the northern entrance to Active Pass. The original lighthouse, as described in a report by deputy minister William Smith, was a building of wood painted white, and consisted of a square tower forty-two feet high from the ground to the vane of the lantern, with keepers dwelling attached.

Within two months of operation, Scotty requested a fog horn. A bell was eventually installed in a tower beside the light, followed by a fog alarm building in 1892.

Scotty, who initiated a light keeping dynasty in his family, served until his retirement on December 31, 1920 at age eighty-five. His brother, James, served at East Point (Saturna Island) from 1889 - 1921, and his son George, and nephews Peter and Henry also went on to become keepers. Scotty lived the last years of his life in a replica of the Active Pass Lighthouse, which his son Peter built on the family homestead on Galiano Island. He died February 2, 1927 and is buried on the land he donated for the Galiano Island cemetery.

Known as one of the best fireman on the coast, Scotty could get steam up in a boiler for the foghorn faster than anyone else. Errant ship captains occasionally complained that the foghorn had not sounded, but his carefully kept logs proved his diligence in minding the signal.

On the afternoon of October 13, 1918, Scottys grandson Archie was working in the fog alarm building with a neighbor. Noticing the time, he bid the neighbor, run out and see if you can hear the Princess Adelaide coming. As the friend rounded the corner of the building, the Adelaide blew her whistle, and he cried, Shes right here on the beach. Archie looked out the door and saw the steamship stuck up right in front of the lighthouse like a great big city just before she ran aground.

Archie recalled, Of course, they naturally said that the foghorn wasnt going, but they were way off base on that because the foghorn was going about ten hours before he came in there. At the time of the grounding, the captain wasnt on the bridge. The first mate had figured he still had a minute before he needed to call the captain up to steer through the pass, but the vessel was a minute and a half farther along than he figured.

When Scotty Georgeson retired, the position went to Captain Arthur Broughton Gurney, a crusty fellow who had been working on British Columbia lights since 1907. Gurenys comportment at Ballenas Island had prompted complaints from his neighbors, and his actions at Active Pass led to a Provincial Police report in 1938 that was in no way favourable. Gurney retired from Active Pass in 1945 at the age of sixty-seven due to his wifes medical condition, which required she be closer to a hospital.

Keeper Gurney spent thirty-seven years in the light keeping service and felt that his son, Tom, deserved his position since Gurenys job had prevented him from giving his family the education they should have had. A bit of a conflict arose because C. E. Carver, who had served for eleven years at Quatsino, wished to be at an in station due to his failing health. The department ruled in favor of Carver, much to the delight of Mrs. Carver.

The original 1885 lighthouse was replaced in 1940 by a square keepers dwelling surmounted by a lantern room. In 1969, a cylindrical concrete structure topped by a lantern and galley was constructed to serve as the lighthouse, but the square dwelling was retained to house the keeper. The modern tower has a focal plane of 17.5 metres (57 feet), and flashes a white light every ten seconds.

Active Pass Light Station fell victim to the de-staffing movement of the 1990s when its last keeper, Jean Beaudet, left the station in 1997. Ownership of the property was transferred to the Gulf Islands National Park Reserve in 2006, while the Canadian Coast Guard still has responsibility for the navigational aids.

Hopefully, the well maintained light station, with its bright white and red structures set against a dark evergreen background, will continue to delight BC ferry passengers as they thread their way through the breathtaking Gulf Islands for years to come.

Located on the northern tip of Mayne Island, at the eastern entrance to Active Pass, which runs between Mayne Island and Galiano Island.
Latitude: 48.87338, Longitude: -123.29151

For a larger map of Active Pass Lighthouse, click the lighthouse in the above map.


After arriving by ferry on the island, we stopped at Sunny Mayne Bakery en route to the lighthouse and picked up a sandwich and a brownie. While enjoying our lunch near the lighthouse, we had several opportunities to catch some good photo ops with both flavors of ferries that were making the Tsawwassen-Swartz Bay run. Since we were captive on the island until the next ferry, we took the advice of the kind gentleman mowing the lighthouse lawn and visited the Japanese Garden at Dinner Bay, which honors the Japanese settlers who lived on the island in the early 1900s. Having still another hour or so to kill, we drove to Bennett Bay and hiked out to Campbell Point, which is part of the Gulf Islands National Park Reserve. The hike is short, and the view from the point is spectacular.