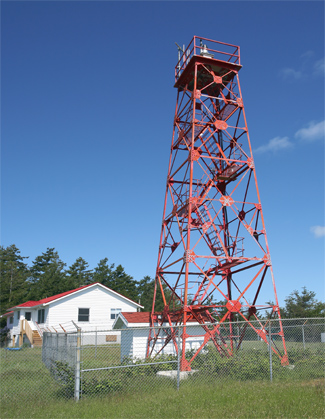 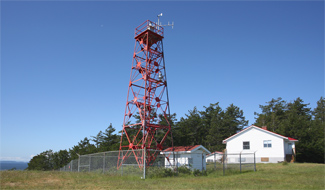 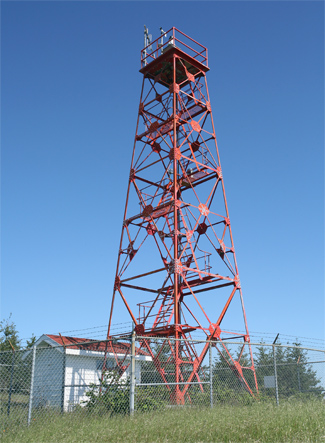 Large ships bound from the Pacific to Vancouver, travel east through the Strait of Juan de Fuca, then turn north and follow Haro Strait, passing San Juan Island on their starboard side, before turning east again at Turn Point on Stuart Island and passing through Boundary Pass, which follows the U.S./Canadian border for 23 kilometers (14 miles). From Boundary Pass, vessels then turn north into the Strait of Georgia to reach Vancouver. Two lighthouses, Canadas East Point Light on Saturna Island and the U.S. Patos Island Light, now bracket the transition between Boundary Pass and the Strait of Georgia, but such wasnt the case in February of 1886 when the two-year-old John Rosenfeld, as fine a specimen of marine architecture as ever floated, was being towed by the tug Tacoma on the beginning of its voyage from Nanaimo to San Francisco. Captain Cameron aboard the Tacoma became disoriented by a fine mist and was a few kilometers off course when his tug safely passed over a reef just moments before the John Rosenfeld, loaded with 3,905 tons of coal, struck bottom. The grounding occurred at high tide just off East Point, and when the tide receded, the ships back broke, leaving its owners no option but to strip her and sell the vessel for salvage. The cargo aboard the stranded vessel did not go to waste as residents of Saturna Island used the coal from the wreck to heat their homes for many years.

Parliament had made an appropriation for a lighthouse on East Point in 1885, but tenders for its construction were not invited until it was too late to be of any assistance to the John Rosenfeld. A contract for the erection of the lighthouse was originally awarded to George Fraser, but Joshua Holland ended up building the lighthouse at a cost of $4,000. The total cost, including the lantern and lighting apparatus, came to $5,966.80.

The wooden Saturna Island Lighthouse consisted of a square pyramidal tower, sixty feet high, with an attached dwelling and was built on land obtained from the well-known Gulf Island pioneer, Warburton Pike. A revolving white light, whose flashes attained their greatest brilliancy every thirty seconds, was first displayed on January 1, 1888 and had a focal plane of 140 feet above the high water mark. Mariners were cautioned to not approach the light within a mile and a half from the northerly and westerly directions to avoid the dangerous ground that snared the John Rosenfeld. A post light was established on Patos Island, across Boundary Pass, in 1893.

The appropriately named John R. Wick was the first keeper at East Point Lighthouse, but he served for just over a year before being transferred to Sand Heads Lighthouse. His replacement was James Georgeson, a brother to Henry Georgeson who had been serving as keeper at Active Pass since 1885. Henry and George would remain at their respective stations for over thirty years, earning the Long Service Medal.

James Georgeson was born in the Shetland Islands, and after establishing himself as keeper, he returned to Scotland to retrieve his wife Joan and their five children. Joan was the first white woman to take up permanent residence on Saturna Island, and her son Peter, born on May 4, 1891, was the first white baby born on the island.

On June 14th 1889, James Georgeson was absent from the station when a brush fire nearly consumed the new lighthouse. James nephew George, visiting from Active Pass, single-handedly fought back the flames and was awarded $30 by the government for his services in saving the lighthouse and buildings at East Point.

James Georgeson suffered a stroke in 1909, and much of the responsibility for the station fell upon his son Peter. When James officially retired in 1923, Colonel Wilby, the Marine Agent in Victoria, wrote Ottawa declaring, I am of the opinion that our Light Service is best maintained by the sons of men who have given the faithful service of practically all their lives to the Department. The knowledge and training of such sons can hardly be equaled for this work, and also they have a tie which binds them to their work such as no stranger could possibly have. Wilby suggested that the position be advertised per the usual manner, but Peter was essentially guaranteed the job.

Peter Georgeson said that in his youth it was not uncommon to see Indian canoes plying the waters near the point, and he heard firsthand accounts of a tremendous battle that took place between Saturna Island and Tumbo Island, when the waters ran red with blood. Skull and bone fragments were frequently found on the beach by the Georgeson children, and Peters sister Joan remembers a visit by Skookum Tom, who boasted about white mens scalps adorning his belt. I wasnt the least bit upset as I didnt know what a scalp was! she recalled. He was then civilized and quite nice to talk to.

The station relied on rain for its water supply, and as rainfall on the point was scant during the greater part of the year, a tank shed was built in 1896 and equipped with three large tanks obtained at a cost of $219.55. Peter Georgesons wife remembered how precious fresh water was at the lighthouse. It was a big place, nine rooms, and I had to keep them clean, and we only had a few gallons of water to use. We had rainwater and we had to wash the clothes and wash the kids and wash the floors and wash the dog all in that, and then put I back on the garden.

In February 1935, R.W. McMurray, President of the West Coast Steamship Service, petitioned for a fog signal at East Point, described as the most dangerous point along the route between Vancouver and Victoria. A foghorn had been established on Patos Island, allowing southbound vessels to steer directly toward that island, but in foggy conditions captains were never sure when to turn west to enter Boundary Pass. An experimental acetylene-powered fog gun was installed in a small shack at East Point in September 1937, but this contraption often misfired and at times was inaudible to the passing vessels.

A fog alarm building with diaphone horns was finally constructed on the point in 1939, the same year that Peter Georgeson transferred to Albert Head. His brother James would keep the light for one more year, bringing the number of years the Georgeson family was at East Point to fifty-two. Andrew Ritchie moved to East Point from Race Rocks in 1940 and remained at the station until his retirement in 1960.

Keeper Ritchie and his wife Kathleen kept an active watch over the waters surrounding the station. One November as the Neptune II, an American trawler homebound from Alaska, was passing the station, Kathleen was thinking how happy the ships crew must feel to be headed home for Christmas, when the vessel burst into flames. She ran to the radio and plead, Emergency! Any one who can hear me! Victoria marine radio picked up the transmission and was able to call in the U.S. Coast Guard, who arrived on scene just in time to pluck a crewman from the stern of the trawler before it went under.

In 1948, the old wooden lighthouse was replaced by a steel, skeleton tower, topped by a standard revolving beacon, and the keepers dwelling was repaired. Another keepers dwelling was built in 1960 and was in use until Saturna Island Light Station was de-staffed in 1996. Around 2006, the station was transferred to Parks Canada, to be added to the new Gulf Islands National Park Reserve. The red, skeleton tower continues to display a pair of lights to aid mariners. Besides the tower, a keeper's dwelling and fog alarm building remain standing at East Point. The keeper's dwelling serves as housing for park staff, and the fog alarm building has been turned into a heritage centre featuring displays and information related to the heritage of East Point.

For a larger map of East Point (Saturna Island) Lighthouse, click the lighthouse in the above map.

Saturna Island can be reached by ferry from several places including Mayne Island and Swartz Bay (Victoria). After you disembark at the Saturna Island ferry terminal on Ralph Road, turn left onto East Point Road, and continue to East Point Regional Park, located at the extreme eastern tip of the island, via Tumbo Channel Road.