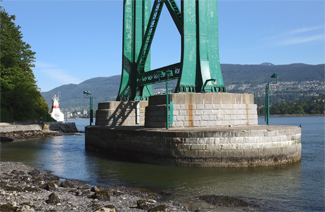 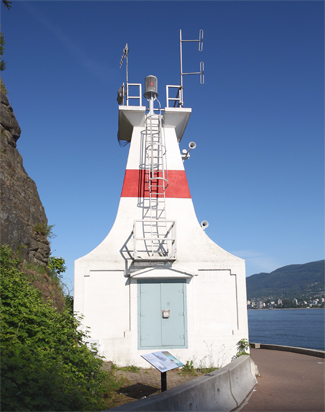 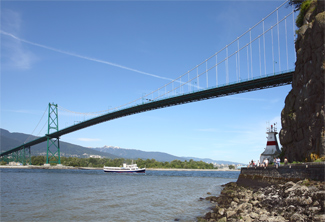 Before the Cleveland Dam was built in 1954, the uncontrolled Capilano River plowed into Burrard Inlet near First Narrows churning up tons of silt and rock that even with diligent dredging made wide variations in where the shallows lay. Because of this, as well as the rivers rush of less buoyant fresh water, ships going through the Narrows hugged as tightly as possible to Prospect Point, opposite the river mouth.

On July 25, 1888, the steamship, Beaver slammed into the Prospect Point. The first steamship on the West Coast, the Beaver, built in 1835, was first used by the Hudson Bay Company, then transferred to the Royal Navy in 1863, where for seven years, she was used to survey the British Columbia coast line. Later sold to the British Columbia Towing and Transportation, she was used to tow barges, log booms, and sailing vessels, until she met her demise when her drunken crew ran her aground.

Three months later, a light was established at Prospect Point, on October 1, 1888, just four days after Stanley Park was opened.

The first light was a fixed white beacon housed in a square lantern room perched atop the pyramidal roof of the keepers dwelling. The focal plane of the light was thirty-one feet above the water, and a mechanical fog bell hung under a gable on the seaward face of the lighthouse. The dwelling portion of the lighthouse consisted of two tiny rooms, and with the tides, water flowed in and out of the cellar. This became the home of John Grove, the keeper, his wife and two sons.

In March 1889, when John Gaudin, the marine agent, inspected the house, he wrote of the cramped conditions, and ordered six barrels of cement so that Grove could pour a concrete cellar floor when the tide allowed. Finally, in 1904, when the oldest son was thirteen, another room was added on the east side, and Grove was given access to two acres of the park for his own use.

In 1900, the characteristic of the fog bell was changed from two strokes in quick succession every minute to one stroke every twenty seconds. Keeper Grove had to wind up the weights that powered the fog bell every thirty minutes. A boat and boathouse were also supplied to the station in 1900.

In dense fog, the mechanical bell at Prospect Point was the only aid mariners had to guide them through the narrow channel and into Vancouvers inner harbour. In 1908 more help came when a light and fog bell were established across the Narrows on the Capilano shoals. Originally just a black cylindrical tank, the Capilano station was upgraded to a dwelling and tower in 1915. Even with the Capilano light, there was on average at least two groundings a year.

In 1906, the MV Princess Victoria sliced through the tug Chehalis just off Brockton Point, two kilometers southeast of Prospect Point, killing eight passengers and crew aboard the Chehalis. To prevent tragedies like that of the Chehalis from occurring in The Narrows, a new duty was given to Keeper Grove, the operation of semaphore signal masts starting in 1909. A semaphore station was built 150 feet above the light, on a bluff overlooking Prospect Point. Grove would signal all incoming traffic, no matter what time of day, and Keeper W.D.Jones, over at Brockton Point would signal all outgoing ship traffic.

It was tough finding good assistants to help with the semaphores. At the time, Groves salary was thirty-five dollars a month. The lowest amount he could pay someone willing to do the semaphore work was sixty-two dollars a month, and with the distance from the lighthouse, 160 steps up the bluff, and round the clock work, Grove really needed two assistants. The Department of Marine and Fisheries gave him fifty-five dollars a month to pay assistants, leaving Grove to shoulder the majority of the work himself or go in the hole each month.

In order to help ends meet, the first summer of the semaphore station, Grove set up a lemonade stand at the top of the bluff and did a thriving business with the tourists, until the Park Board complained and shut the stand down.

Another time, Grove asked if his daughter-in-law could be an assistant, but was answered that the regulations specified competent men for the post. Grove responded, I am getting better service from [her] than I ever got from single men, but orders are orders and I will try to get another man.

The semaphores were discontinued at Brockton Point in 1918, leaving Grove with double the work, logging both incoming and outgoing traffic. Six years later, in 1926, Grove was informed that Prospect Point Lighthouse would be electrified. I am further instructed by the Department that when this work is completed, the Prospect Point Light and Fog Alarm Station will be operated from the Prospect Point Signal Station and the your services will no longer be required, the marine agent wrote.

After thirty-eight years of service at Prospect Point, Keeper Groves role was now being assumed by the semaphore station that had caused him so much extra work and suffering. There was one piece of good news. If it is your desire to remain on in your present dwelling, the marine agent wrote, I am prepared, in view of your long, faithful and satisfactory service, to recommend to the Department that this privilege be granted to you.

The original Prospect Point Lighthouse remained standing even after 1938, when the Lions Gate Bridge, a Vancouver landmark, was constructed, linking Prospect Point bluff at Stanley Park to North Vancouver. Over on the north side, Capilano Lighthouse continued in operation as a manned lighthouse until the spring of 1946, when it was electrified and run by a signal tower on the bridge.

The current Prospect Point Lighthouse was established in 1948. Its red light, shown from atop a square pyramidal cement tower painted white with a single red horizontal stripe, has a focal plane of thirty-eight feet above the water, with a signature of one second on, one second off. The reinforced concrete structure was built by J.C. Dill at a cost of $7,712.

The Capilano Lighthouse continued operating until a concrete beacon was built nearby to replace it. The residents of North Shore watched an era come to an end when the lighthouse was set a blaze on February 26, 1969.

For a larger map of Prospect Point Lighthouse, click the lighthouse in the above map.

The Prospect Point Lighthouse can be reached via the Seawall from various parking areas in Stanley Park.


When we arrived at the parking spaces that are closest to Prospect Point, we had a short discussion about whether we had to pay for parking or not. We had seen a pay box at some other parking spaces, but we didn't see any pay box within several hundred feet of our car, and there was no sign indicating that we had to pay. Take it from one who has now paid a parking ticket in Canada, you MUST pay to park in ANY parking space in Stanley Park, and as I noticed when I returned to the park the next day, there are signs that say so at the park entrance.

After we had come to the incorrect conclusion about the parking matter, we enjoyed a short stroll down the seawall, underneath Lion's Gate Bridge, and around Prospect Point. We spent some time taking pictures and watching a big ship or two go by then headed back to the car. As we passed under the bridge, we encountered a frantic girl on a cell phone who was placing a call to 911. She reported seeing a person jump of the bridge, go under the water, briefly resurface, and then disappear. Others had obviously witnessed the same thing as a guy ran down to the shoreline in order to more closely scan the water. That news left us with a sad/sick/helpless feeling, and after a few minutes of scanning the waters ourselves we moved on. By that time, a boat had joined in the search, and as we were returning to the car, we saw a police boat racing to the scene and passed two policemen on the seawall.

We tried to find a report of the incident in the paper the next day and even searched the internet after returning home, but could never find out exactly what happened on the bridge that day.