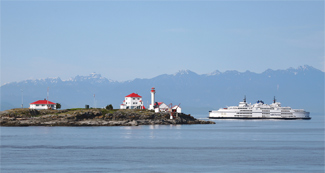 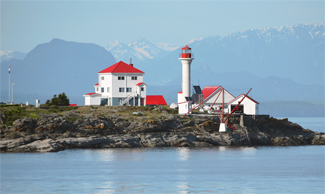 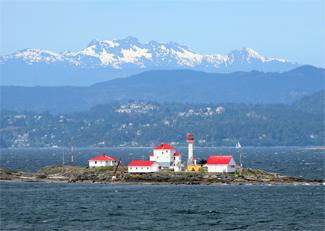 In 1967, nearly 200 tubbers entered Nanaimos first bathtub race, and of those, an amazing forty-seven made it across the Strait of Georgia to Vancouver. The length of the course is still thirty-six miles, but the annual World Championship Bathtub Race now follows a roughly circular route with Entrance Island, a thirty foot high barren outcropping of rock thirteen kilometres (eight miles) outside Nanaimo Harbour, serving as the first checkpoint.

Departure Bay and Nanaimo Harbour were busy ports in 1872, shipping coal to destinations throughout the Pacific Rim. In that year alone, 50,000 tons of coal cleared Departure Bay, and with all that shipping, it was inevitable that the Department of Marine and Fisheries would call for a lighthouse to mark the area.

On January 6, 1875, the Nanaimo Free Press announced that a lighthouse would be built on Entrance Island. As a ship sailed up Georgia Strait, a light on Entrance Island would come into view before the lights at Point Atkinson and the Fraser River were lost. The site for the lighthouse on the northeast corner of the island was the same spot where many years earlier, Imperial surveyors had piled up a heap of stones as a daymark.

The contract for building the light station, along with Berens Light in Victoria Harbour, was awarded to Mr. Louis Baker of Montreal, who committed to construct both lights for $6,900. Baker arrived with much fanfare in August 1875, and promised the light would be up and running by November. But in February 1876, the work was only two-thirds complete, and Baker, after withdrawing all his money, absconded from Nanaimo aboard the steamer Goliath, leaving behind unpaid and angry workmen and suppliers. James Gordon, who was hired to complete the light station, followed suit two months later.

Crooked contractors were not the only thing to plague the construction. Like many a lighthouse, its completion only came after lives were lost in the process. In October 1875, three workmen, Mathias Longden, Walter Sawyer, and George Furguson, left the island in a good sea boat and shortly thereafter found it necessary to tack. The Free Press reported what followed. In doing so, Longden (who weighs about 225 lbs) failed to change his position. This caused all the weight to be on one side, and the boat filled and turned bottom upwards. The three men managed to get on the keel of the boat. In a short time Sawyer slipped off and was seen no more. After the boat had drifted about a mile in the direction of Lighthouse Island, Longden was seen to drop into the chilling waters. The boat, with Furguson still clinging to the upturned keel, drifted into the Gulf. The men on the island used their best endeavors to save the unfortunate men, by throwing planks and sticks out towards them, but without avail. There was no other boat on the island. The boat was later found, but no trace of the three men was ever discovered.

The lighthouse, a square white tower, rising sixty-five feet above high water and attached to a keepers dwelling, was declared finished in April 1876 by Arthur Finney, who also oversaw construction of the Point Atkinson lighthouse. It cast its beam for the first time when John Kenny lit its six lamps on the night of Thursday, June 8, 1876.

Kenny resigned six months later, and Robert Gray replaced him. Gray, who served for twenty years, watched in horror in November 1881, when, during a fierce gale, a boat crashed onto the rocks of the island. Gray ran down with a rope to try to assist the passengers, two men, two women, and three children, but a wave struck the stern, overturning the boat, and carried all its occupants out to sea.

In 1891, a fifth-order dioptric apparatus, visible for fourteen miles and equipped with a red sector to warn of Gabriola Reefs, replaced the original light. A larger, fourth-order lens with a twin capillary burner was installed in May 1905, and a revolving lens floating upon a mercury bath replaced this in 1921.

The light station also saw a progression of fog signals. An engine room housing a steam-powered foghorn was built in 1894. In 1915 the signal was converted to diaphones with gasoline engines driving the air compressors.

Keeper Grays successor, M.G. Clark saw a canoe carrying two Indians capsize just off the island in July 1902. He and his assistant, John Roberts, quickly launched the station boat and rowed out to save the men. For their good deed, they were each awarded a pair of binoculars and earned a solid, though not sustainable, reputation, which Clark milked for years to come.

Clark and his wife owned a ranch near Orlebar Point on Gabriola Island, a half-mile away from Entrance Island. Mrs. Clark disliked living on Entrance Island, so spent all her time at the ranch. Surprisingly, Keeper Clark spent little time on the island himself, hiring assistants to perform his lighthouse duties and work at the ranch as well.

In a letter to the marine agent, Hugh Brestin described what it was like to be an assistant for Keeper Clark. When I got there, I was made to feed the chickens, dig his garden, clean his house down for his angel wife. Brestin was hired in February 1909, and resigned just three months later.

Brestins successor was also conscripted as a ranch hand. In November 1910, after working all day at the ranch, he set off in a rowboat at sunset for Entrance Island to tend the light. He never made it. Clark waited until the next day to report the disappearance, causing suspicions to linger for quite some time over the death of the assistant.

A month later, Clark wanted off the island and petitioned for a pension stating that he was in poor health with his eyesight failing to such a point that he could no longer even clean the lamp. The superintendent of lights went to Entrance Island in February and reported that for a man who could barely see, Clark was quite adept at reading fine print and was able to climb the stairs very quickly. His pension request denied, Clark decided that he might be able to keep the light for a few more years.

In June 1911, Allan Pope and his wife answered Clarks ad for an assistant. They were told Mr. Pope would be expected to keep things clean and smart about the lighthouse and tend a flock of chickens, while Mrs. Pope would be responsible for the housework. On finding that Clark really expected them to tend both the ranch and the light, Pope wrote the marine agent, stating that Clark rarely spent time at the lighthouse, Mrs. Pope was expected to do all the Clarks laundry as well as clean the lighthouse top to bottom, and they were not the first people that Mr. Clark [had] treated unfair. Clark soon thereafter fired Pope for being tardy in getting to the ranch in the mornings.

Clark was finally let go in 1913, and his successor, W.E. Morrisey, continued to take advantage of the assistants. Edwin and Bertha Perdue were hired to help at the lighthouse in October 1914, and shortly after, Bertha wrote Victoria asking if there were a set of rules and regulations for lightkeepers that she could read to determine if assistants normally had to stand watch twenty-two hours a day, feed pigs and chickens, and be confined to just two rooms without access to a washroom. The marine agent replied that only the lightkeeper was an employee of the department and assistants were wholly under the order of the lightkeepers. After two months at the station with no pay, the nearly starving Perdues engaged the services of an attorney, but this action simply infuriated Morrisey, who promptly ordered the couple off the island.

Since Morrisey, a succession of lightkeepers have faithfully kept the light burning, even while experiencing personal tragedies. One notable example is Michael OBrien, who in October 1928 had the painful task of radioing Victoria, My wife drowned last night, rush a relief immediately.

Sometime around 1970, a cylindrical concrete tower was built a few feet away from the dwelling, replacing the original light. The tower stands 14 metres (45 feet) tall, with a focal plane of 19 metres (62 feet), and flashes a white light every five seconds.

Situated so close to Nanaimo, Entrance Island Lighthouse watches over a large number of boaters and kayakers, and an annual flotilla of bathtubs. The boating community, in turn, keeps its eye on the lighthouse. In 1995, when it was announced that Entrance Island might lose its keepers, more than 100 kayakers, in an act of protest, formed a human life preserver around the island.

Entrance Island retained its keepers, but the reprieve may have been just temporary, for in September 2009, the Canadian government announced it would soon de-staff the station and three other British Columbia Lighthouses as part of a cost saving measure.

For a larger map of Entrance Island Lighthouse, click the lighthouse in the above map.

A distant view of Entrance Island Lighthouse can be had by taking the ferry from Nanaimo to Gabriola Island. From the ferry terminal, go east on North Road, then take your first left onto Taylor Bay Road. After 1.7 km (1.1 miles), Taylor Bay Road will become Berry Point Road. Continue on Berry Point Road for 3.4 km (2.1 miles) to get a view of the lighthouse. The lighthouse can also be seen from the ferries servicing Nanaimo from Vancouver - best views are definitely from the Duke Point - Tsawwassen Ferry.


True, you can get a good view of the Entrance Island Lighthouse from the Duke Point - Tsawwassen Ferry, but I highly recommend a trip over to Gabriola Island to view the lighthouse. After arriving on the island on the ferry, we grabbed some takeout food from Suzy's Restaurant (be sure to try a Nanaimo Bar, if you haven't had one before), and then drove out to Orlebar Point, where there is a picnic table with a glorious view of Entrance Island and the Strait of Georgia. A dog stopped by to enjoy some of our food, and just like us, he was reluctant to leave the area, even after his owner came looking for him.