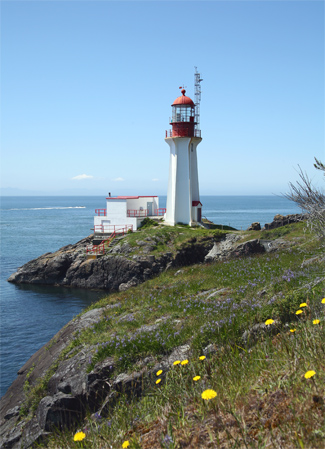 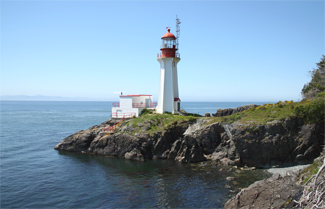 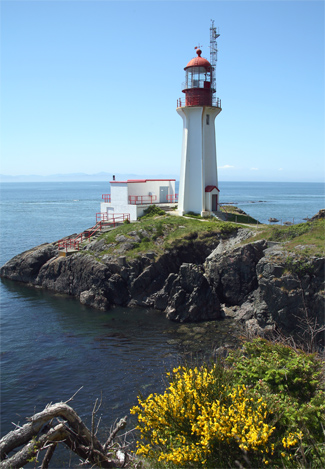 On the night of February 26, 1862, the Anna Barnard, bound from San Francisco to Sooke for a load of lumber, approached Vancouver Island. Captain Olmstead and his seven-man crew could hear the pounding surf, but thick, soupy fog prevented them from seeing exactly how close to shore they were. Their luck ran out when they struck rocks a few miles from Sheringham Point. As their bark began to break apart, the captain and two crewmen launched a lifeboat but almost immediately the small vessel overturned in the surf. Captain Olmstead managed to swim to shore, but the cook and seaman who were with him drowned. The five remaining men aboard the bark climbed up the mast, where they passed a white-knuckled night clinging to the rigging until the tide went out and they were able to wade ashore. Unlike so many other shipwrecks along the west coast of Vancouver Island, the story of the wreck of the Anna Barnard is known because members of its crew survived and, after being assisted by First Nation people, were taken to Victoria to tell their tale.

Even after Carmanah Point Lighthouse was built at the northern entrance to the Strait of Juan de Fuca in 1891, there were still several nautical miles of unnerving darkness before a ship entering the strait from the north would catch the light from Race Rocks. This dark void disappeared in 1912 with the establishment of the Sheringham Point Lighthouse.

Manuel Quimper, a Peruvian-born navigator sent by Spain to explore the coast of Vancouver Island, was the first to map the point, and he named it Punta de San Eusivio in 1790. The name didnt last for long. During his 1846 survey aboard the H.M.S. Herald, Captain Henry Kellet changed the name to Sheringham Point in honor of Commander William Louis Sheringham of the Royal Navy. Captain Kellet had served under Sheringham, whose accomplishments included surveying the south coast of England and Wales and assisting Captain Francis Beaufort in the compilation of Sailing Directions.

The site for Sheringham Point Lighthouse was purchased from the Edwin Clark family in October of 1911 for $196.85 (3.937 acres at $50 an acre), and construction began the following year under a contract to Thomas Stedham of Victoria. The Annual Report of the Department of Marine and Fisheries for 1913 lists the following expenses associated with the work:

The hexagonal reinforced concrete lighthouse stands twenty metres (64 ft) high and was designed by William Anderson. Also at the station were a small boathouse, east of the tower, a square, white fog alarm building with a gable roof, located between the tower and the shore, and a substantial keepers dwelling, situated up the slope, well back from the tower. The original fog alarm building has since been replaced by a square, concrete building with a flat roof, while no keeper's dwelling remains.

The original fog horn, which was operated by a steam engine, was replaced around 1925 by a diaphone horn powered by compressed air from oil engines. The fog alarm was later equipped with an automatic low visibility detector.

Eustace Travanion Arden lit the light for the first time on September 30, 1912. Sheringham Point with its dramatic view of the Olympic Mountain Range and close proximity to town had very little turnover. Keeper Arden remained at the station almost thirty-four years, retiring on February 18, 1946.

Alfred Dickenson served at Capilano Lighthouse until the spring of 1946, when the light was electrified and operated from the signal tower on nearby Lions Gate Bridge. As Dickenson was sixty-one at the time, there was talk of his retirement, but he preferred to take another assignment if possible, so on June 13, 1946, the tender Berens arrived to transport Alfred, his wife Annie, and their few crated belongings to Victoria, from where they would travel by truck to their new home at Sheringham Point. A southeast gale was blowing with heavy rain the day they sailed for Victoria, and Annie became quite seasick. Most of the stuff is soaked, Alfred complained, damned disgrace how things are handled, several things broken.

After having spent twenty-four years in a small dwelling perched above First Narrows, the Dickensons likely expected improved conditions at Sheringham Point, but such was not the case when they arrived. In all my life I have never seen such a disgraceful condition for a government lightstation, Alfred lamented. I do not blame the temporary keeper, this dump was never looked after, hell of a mess  Engines just a bunch of junk. During his first night of service at Sheringham, the light stopped at 12:30 and again at 1:10 a.m.

Keeper Arden, a loyal Tory, had been granted the position of first keeper at Sheringham Point over more qualified men, who just happened to lack his political connections. The Dickensons inherited the outcome of such patronage, but given Alfreds diligence, the station surely didnt remain in a dilapidated state for long.

Jim Bruton was transferred from Lennard Island to Sheringham Point in 1968, after Keeper Frederick Mountain passed away at the station. Bruton and his family loved the spot, and one of his daughters, Sharon, was married in the lantern room in 1976 with sixteen people, including the minister, all crowded in the small space. Bruton left the station in 1987, and Kurt Cehak took charge until the light station was de-staffed in August 1989.

The original keeper's dwelling, which had been serving as quarters for the assistant keeper since a modern, one-story bungalow had been built in 1964 for the head keeper, was intentionally burned down on January 9, 1986, after the position of assistant keeper was abolished. The bungalow was burned down in the 1990s after being vandalized.

The third-order Fresnel lens originally used in the lighthouse was removed in 1976 and is now located at the Sooke Region Museum, where a panel of it can be viewed by appointment.

The Sheringham Point Lighthouse Preservation Society was formed in 2003 to work for the preservation of the tower and the creation of a public park on the surrounding ten acres. The Department of Fisheries and Oceans (DFO) completed a land swap in early 2008 with a neighboring landowner to help make the park possible. The land around the lighthouse, formerly owned by Western Forest Products, was sold to a private developer and is currently being developed into home sites. In 2010, controversy surrounded the sale of other nearby lands by Western Forest Products to the same private developer. Conservation groups are actively petitioning the government to purchase those lands for public use.

In 2015, Sheringham Point Lighthouse was designated a heritage lighthouse under the provisions of the federal Heritage Lighthouse Protection Act, meaning the property will have legal protection to ensure it can be enjoyed and appreciated for generations to come. The lighthouse was one of seventy-four across Canada to be so designated.

In 2017, the Sheringham Point Lighthouse Preservation Society received a multi-year financial commitment totaling $550,000 from Ontario-based Westaway Charitable Foundation. The gift requires that roughly half of the funds be raised in the community, but the society already has a large portion of this amount. Peter Westaway, president of Westaway Charitable Foundation, owns Long Point Cut Lighthouse in Ontario and earned awards for its restoration. Westaway initially gave Sheringham Point Lighthouse Preservation Society $1,000, but increased his donation substantially after seeing the group's dedication. We heard about the group and thought it deserved some financial support, so we sent a cheque, said Westaway. Later when I met the board members and volunteers, I was impressed with the planning expertise and their vision of this site as a coastal asset open to all. I am proud to be able to partner with SPLPS and magnify the substantive community-based financial support they have been given to further this important maritime heritage project.

For a larger map of Sheringham Point Lighthouse, click the lighthouse in the above map.

Take Highway 1 west from Victoria for roughly 10 km (6 miles), and then take Exit 14 and travel on Highway 14 to the town of Sooke. Continue on Highway 14, also known as West Coast Road at this point, for 18 km (11.6 miles), and then turn left onto Sheringham Point Road. Sheringham Point Lighthouse is accessible via a trail from a parking area at the end of the 1.8-km-long road.

A chain link fence surrounds the lighthouse property, but decent views of the tower can still be had from the adjacent land.


During a visit to Sheringham Point in 2009, the property just east of the lighthouse had clearly just been divided into oceanfront home sites. I did a little research after returning home and found that the development, not surprisingly, is known as Sheringham Point. Also, not surprisingly, my dream lot near the lighthouse is no longer available, but it was only just that - a dream.