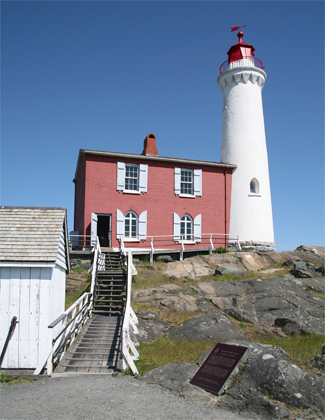 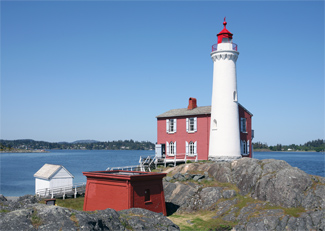 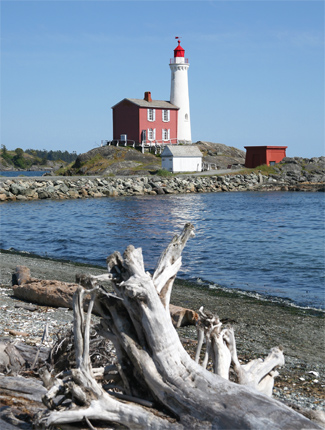 It seems only fitting that just outside the charming city of Victoria, British Columbia stands the historic and quaint Fisgard Lighthouse.

Fifty years after Captain Vancouver sailed through the Strait of Georgia and named Vancouver Island after himself, the Hudson Bay Company established control of the island and built Fort Victoria, named after Queen Victoria, in 1843. Puget Sound Agricultural Company, a branch of the Hudson Bay Company, started developing large farms near Fort Victoria, and by the time Vancouver Island was established as a colony in 1849, Esquimalt Harbour had become a major port for British ships.

Then came the gold rush. In the late 1850s, gold strikes on the mainlands Thompson and Fraser rivers brought thousands of prospectors through Victoria, the only source of supplies in the region. Victoria quickly became a boomtown, with a dash of British flavor.

In November 1859, Captain J. Nagle, Victorias harbourmaster, seeing the need for an aid to navigation, paid $100 for a lantern and placed it on MacLaughlin Point, at the entrance to Victoria Harbour. Unfortunately, five months later, the lamps tubes overheated and melted down, and Nagle had no funds to replace them.

Desiring a replacement for Nagles light, Victorias merchants petitioned the assembly to allocate funds for a formal lighthouse, but the bill never passed. By then, Captain George Richards, the captain of the HMS Plumper, which was used to survey the British Columbia coast, convinced Nagle that the lighthouses Richards had proposed for Fisgard and Race Rocks were more crucial, and efforts began in earnest to establish these lights.

Commander James Woods, who was surveying Esquimalt Harbour in the brig HMS Pandora in 1846, named the outcropping of volcanic rock just outside the harbour, Fisgard Island, in honor of the assistance he had received from the frigate HMS Fisgard. The island was selected as the site for the lighthouse because it could provide direction for ships to enter Esquimalt Harbour or anchor in Royal Roads, the body of water just south of Fisgard Island, before heading into Victoria. Construction began in 1860, with a design by German-born engineer and architect, Herman Otto Tiedeman, and work overseen by John Wright, a local contractor.

The tower has a two-foot-thick solid granite foundation which is surmounted by fortress like four-foot-thick brick walls and topped with another granite slab, ten inches thick by four feet. The tower stands 14.5 metres (48 feet) tall with a focal plane of 21.5 metres (71 feet). The two-story keepers dwelling, also made of brick, has a pair of rooms on both floors each measuring eighteen by fourteen feet. Victorias paper, the Colonist, noted that the towers spiral staircase, cast in San Francisco, certainly reflects a great credit on the designer and to see it will amply repay a visit to the Lighthouse.

While work was underway on the tower, George Davies, aged twenty-eight, was hired in England to be the first full-time keeper on Canadas West Coast. He signed his yearlong contract on Christmas Eve, 1859, and was given a wage of 150 pounds per annum without rations along with a dwelling exclusive of bedding and linen. He and his wife, Rosina, and three of their four children, boarded the Grecian on January 19, 1860, and set sail for Victoria, a journey that lasted seven months.

The light, focused by a fourth-order Fresnel lens, was first lit on Friday, November 16, 1860, becoming the first operating lighthouse in British Columbia. On that day, George Davies, wrote in the logbook:

On February 9, 1861, Davies transferred to Race Rocks, which was activated six weeks after Fisgard Lighthouse. Keeper Davies continued to alternate watches with his wife Rosina, who was paid forty pounds. Relief keepers worked at Fisgard until William and Amelia Bevis arrived in March to take over the duties.

Davies, who signed off almost every log entry with alls well, would die from an illness five years later at Race Rocks, leaving behind his young widow with four small children. His son James, would later follow in the family tradition and become the lightkeeper at Egg Island, Triangle Island and Carmanah Point.

William Bevis also died after a long illness at Fisgard on August 5, 1879. His wife and niece performed the lighthouse duties during his illness and were recommended by Captain F. Revely, the marine agent, to be appointed to replace him. The reply came back that it was against the rules of the Department to place Lighthouses in charge of women. The two women stayed on until a replacement, Henry Cogan, arrived on January 6, 1880.

Cogan left four years later, and Joseph Dare took his place. On February 28, 1898, Dare was walking along the shore shooting at mink for sport, when he slipped and his rifle fell from his hands, hit the rocks, and discharged a load of shot into his eye. He spent four months in the hospital without pay before returning to duty half blind in June. One month later he drowned while rowing home to Fisgard.

Keeper Gosse, Fisgards last keeper, left the station in early 1928, shortly after the light was automated. Currently, the signature is a white light flashing two seconds on, two seconds off with a red sector toward Victoria.

In June 1970, Mona Morrison and Violet Allen, granddaughters of George Davies, and daughters of James Davies, paid a special visit to Fisgard. They turned over the first logbook, which had come into the hands of Mrs. Morrisons husband, T.E. Morrison, to Captain Jack Rippengale, superintendent of Fort Rodd Hill National Historic Park.

Captain Rippengale had previously come in contact with a Fisgard logbook when his was stationed at Fort Rodd in the 1930s. He and some of his buddies had waded over to the island and rummaged around the buildings. He found an 1866 logbook, and was tempted to take it, but knew it was against the rules. The next summer, he went back, only to find the journal ripped to pieces and scattered about the abandoned living quarters. He regretted not taking the book the prior year.

The causeway between Fort Rodd Hill and Fisgard Island was built in 1951 as a military barrier to prevent torpedo attacks on vessels anchored in Esquimalt Harbour. The station was electrified a few years later, and in its centennial year, 1960, it was declared a National Historical Site.

In the 1970s and early 1980s, Parks Canada restored the lighthouse to its Victorian appearance, and reconstructed the brick storehouse and wooden boathouse. The keepers house was turned into a museum with exhibits on the history of Fisgard and other lighthouses of British Columbia.

Fisgard Lighthouse was closed starting in the summer of 2009 to undergo renovation that was part of $1.56 million infrastructure and facility upgrade for the historic site. The rooms in the lighthouse received new exhibits and were furnished to feel more like the keepers residence it was. Now, visitors will be able to once again enjoy the lighthouses Victorian charm, which should last for many years to come.

Located on a small island at the western entrance to Esquimalt Harbour, off Ocean Boulevard in Belmont Park west of Victoria.
Latitude: 48.43039, Longitude: -123.44757

For a larger map of Fisgard Lighthouse, click the lighthouse in the above map.

Take Highway 1 west from Victoria for about 5 km (3 miles), and then take Exit 10 and travel south on Highway 1A for 2.2 km (1.4 miles). At the third traffic light on Highway 1A, turn left onto Ocean Boulevard, and then follow the signs for Fort Rodd Hill and Fisgard Lighthouse National Historic Site.

The lighthouse is owned by Parks Canada. Grounds/tower open.