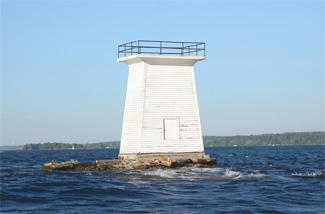 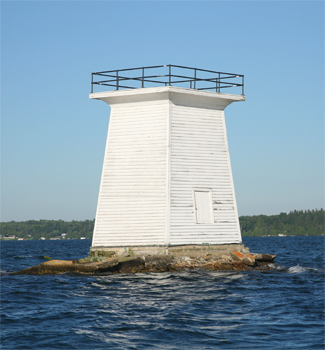 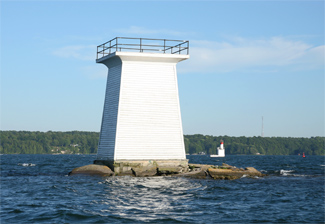 Cole Shoal Lighthouse, situated on a pier in the St. Lawrence River, five miles west of Brockville, was established in 1856 along with eight similar lights to mark treacherous points in the Thousand Islands between Brockville and Kingston. The shoal takes its name from the Cole family, loyalists who fled the United States during the Revolutionary War and became the first settlers of Coles Ferry, located five miles west of the present town of Brockville. Adam Cole and Thankful Fulford, his wife, were soon joined by Thankfuls brothers, and there are still many Fulford descendants in the area today. In 1812, Adam and Thankful Coles family consisted of nine sons and seven daughters, besides four children who died in infancy.

Richard Elliott was hired as the first keeper of Cole Shoal Lighthouse, and he would faithfully row out to the white, wooden tower twice daily to tend the two lamps and reflectors that produced a fixed white light at a height of thirty-two feet above the river. In 1861, the lamps consumed roughly fifty gallons of mineral oil during the shipping season.

Keeper Elliott had to provide his own accommodations on shore until a dwelling was built for the keeper of Cole Shoal Lighthouse in 1860. The Commissioners of Public Works noted in 1861 that the lighthouse needed to be protected, and in 1864 a new pier was constructed and the lighthouse repaired.

The following description of the lighthouse was filed by Darius Smith, Superintendent of Lights above Montreal, after a visit in 1877:

Mr. Richard Elliott is the Keeper, who is 69 years of age. We arrived at this station on the 6th July and supplied the stores. This lighthouse is situated on a pier five miles west of Brockville, and three-quarters of a mile from the north-shore, and is a white square wooden building placed on a pier 55 x 22 feet, and shows a fixed white catoptric light, burning three No. 1 lamps with two 18-inch and one 14-inch reflectors, size of glass 28 x 36 inches. The pier requires repairs, and glass is wanted for the lantern.

The fence on the division line, [between] the property of the Government and private parties, requires repairs. The Deputy Minister of Marine instructed the Keeper to enquire at what rate material could be procured, and the cost for a man to assist him to put it in good order.

Keeper Elliott was superannuated in 1884 at the age of seventy-six, and Erastus Rowsome was placed in charge of the light at an annual salary of $250. Unlike Elliott who served twenty-six years, Keeper Rowsome resigned after less than two years. Robert Boyd, the next keeper, looked after the light for thirty-four years, longer than any of its four keepers.

In 1915, near the end of Robert Boyds service, E.H. Horton was contracted to construct a wooden lighthouse to serve as the back range light to Cole Shoal Lighthouse. The Lake Carriers Association printed the following description of the new rear range light in its annual report for 1916:

On the opening of navigation, 1916, a fixed white catoptric light of 2,700 candlepower, was established on the northern shore of St. Lawrence River, 1,200 yards 21° 30' from the existing front light on Cole Shoal, and constitutes the rear light of the Cole Shoal Range. The light is exhibited 107 feet above the summer level of the river, from an octagonal enclosed tower with sloping sides, painted white, surmounted by an octagonal iron lantern painted red, and visible 8 miles in the line of range. The height of the tower from its base to the top of the ventilator on the lantern is 33 feet. The lights in one bearing 21° 30' lead from Superior Shoal gas buoy to Cole Shoal.

Besides the cost of constructing the rear range tower, an additional $903.20 was spent for the lighting apparatus, the necessary land, and inspection of the work.

John E. Locke was hired in 1916 to look after the rear range light, and David Hodge replaced Robert Boyd as keeper of the front light in 1917. Tending a light on a shoal required more effort than looking after one on the mainland, and the keepers were compensated accordingly. In 1923, Keeper Hodge earned $480 a year, while Keeper Locke was paid just $150.

In August 1917, the front light was improved by the installation of a third-order lens in place of a seventh-order lens. At the same time, the pier was rebuilt in concrete, and the old wooden tower was renovated and fitted with a modern octagonal iron lantern room, painted red.

Cole Shoal Range Lights were in operation from 1917 to 1927, when they were replaced with the De Watteville Island Range Lights.

Albert Munro, who owned most of the land on the west side of Fulford Point Road and had built the rear range lighthouse, purchased the lantern-room-less rear tower in 1937 and subsequently built an observation deck atop it. The tower, which for a few years sported four wooden blades that made it resemble a windmill, remains in the Munro family to this day.

Had it remained active, Coal Shoal Lighthouse might have prevented a couple of shipwrecks. In April 1939, the steamer Valley Camp ran aground on Cole Shoal in foggy weather. The tug Salvage Prince managed to pull the steamer off the shoal but not before two-thirds of her cargo of soft coal had been removed. Once freed, the Valley Camp proceeded to Prescott where the rest of the coal was offloaded before the vessel entered drydock. The 518-foot Swedish ship Amicita grounded on the shoal in 1962, puncturing a hole in its bow.

On the evening of July 23, 2018, thunderstroms rolled through the Alexandia Bay area, and a lightning strike ignited a fire that destroyed Cole Shoal Lighthouse. Lacking funds to rebuild the lighthouse, Ontario Heritage Trust signed over ownership rights for the tower to Elizabethtown-Kitley Township, which started raising funds. St. Lawrence Cruise Lines was the first donor, generously giving $100,000, half of the rebuilding committees goal. The Burnbrae Foundation offered to match $30,000 in donations, which brought in an additonal $60,000. In November 2019, the township council awarded a contract to rebuild the lighthouse to Kehoe Marine Construction for a cost of $211,000.

In June 2020, Kehoe Marine Construction began work on a replacement lighthouse for Cole Shoal. After a foundation was prepared at the shoal, the lighthouse, which was assembled on shore, was barged to the site. The final finishing touches, which included a small wooden lantern room and lightning arresters, were placed atop the tower in September.

For a larger map of Cole Shoal (Range Front) Lighthouse, click the lighthouse in the above map.

The lighthouse is best seen from the river, but a view from shore is possible from King's Highway, just east of Highway 401's Exit 687.

The lighthouse is owned by Ontario Heritage Foundation. Grounds/tower closed.