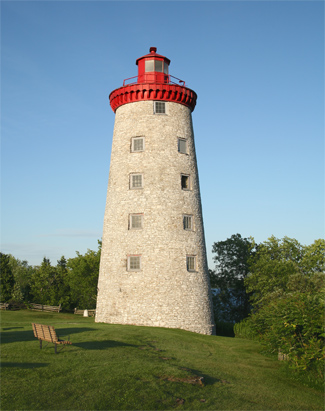 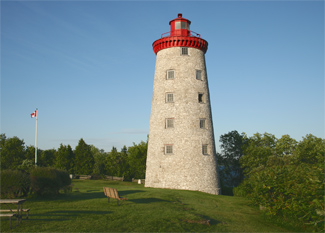 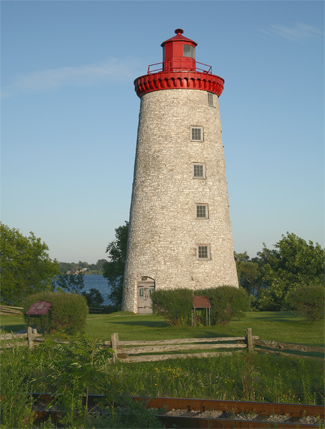 Circa 1830, Thomas Hughes, a West Indian merchant, built a tall stone windmill on the banks of the St. Lawrence that became the dominant feature in the small community of Newport. Though the windmill served the needs of local residents by grinding their grain into flour or animal feed, the historic stone structure is now remembered more for a battle that took place in its shadow and for its repurposing as a lighthouse. Through his newspaper the Colonial Advocate, William Mackenzie helped lead a reform movement in Upper Canada in the 1820s and 1830s that culminated in an armed march on Toronto, the provincial capital, on December 5, 1837. Though many citizens were dissatisfied with the provincial government, they were not prepared for aggression, and Mackenzies rebellion was quickly crushed. Many rebels fled to the United States where they helped establish a secret paramilitary organization whose members were known as Hunters. In New York State alone, an estimated 283 Hunters lodges sprang up with a combined membership of 20,000. Many Americans believed that the majority of Canadian colonists wanted to throw off British rule and establish a republic similar to their own.

In May 1838, a group of Hunters led by Bill Johnston captured the British steamer Sir Robert Peel when it stopped to at Wellesley Island to pick up firewood for its boilers while on an upriver journey from Prescott. Known as the Admiral of the Patriot Navy, Johnston would later serve as keeper of Rock Island Lighthouse in New York. The attack on the Sir Robert Peel prompted Sir John Colborne, Commander-in-Chief for the Canadas, to have Fort Wellington repaired and strengthened. Situated near Prescott, Fort Wellington was built during the War of 1812, but had fallen into disrepair.

In the fall of 1838, Hunter leaders in northern New York decided to invade Upper Canada and chose Prescott as their point of attack. Since the U.S. government did not support the invasion, the assembling of troops and arms was carried out in secret. Roughly 250 Hunters landed at Windmill Point in the early morning hours of November 12, but their hope that locals would join their cause wasnt realized. Instead, nearly 2,000 local militiamen and British soldiers surrounded the rebels position. Though the point provided a strong defensive position and the windmill could be used to survey the surrounding countryside, the greatly outnumbered rebels stood little chance.

The Hunters managed to fend off the British until November 16, when a large force, backed by armed steamers on the river, positioned themselves for a final assault on the windmill. After a two-hour bombardment that afternoon, the rebels were low on ammunition, food, and a will to continue the fight. As night fell, the British moved in for the kill. Many Hunters fought to the death, but the majority either surrendered or fled the battle under the cover of darkness. Fifty rebels who died in the battle were buried in a common grave dug near the windmill. Of the 159 captured, eleven, including Nils von Schoultz the leader of the invasion, were put on trial and executed in Kingston, sixty were convicted of treason and sent to a British penal colony in Tasmania, while the rest were freed.

Though the invasion didnt succeed, the rebellion helped transform political life in Upper Canda and forced the British to review the way they administered the province. Three years later, Lower Canada and Upper Canada were combined to form the United Province of Canada, and twenty-nine years later, confederation created the independent Dominion of Canada.

The story of how the windmill was transformed into a lighthouse is told by the following entry in the Annual Report of the Department of Marine for 1873:

Numerous applications had been made to this Department from time to time for a lighthouse at Windmill Point, near Prescott, in the River St. Lawrence, and it was thought very desirable to obtain possession of the stone tower at that place, which has been formerly used as a wind-mill. It was a very strong and substantial building, and arrangement was made with the proprietor, by which it was purchased for $600, with the right of way to the river and from the main road. It was subsequently fitted up as a lighthouse, and the total cost of fitting it up and equipping it, along with the purchase of the tower and land on which it stands, was $3,266.27. It is a white fixed light on the catoptric principle, containing four mammoth flat-wick lamps, with 16-inch reflectors, and was exhibited for the first time on the 15th day of June last. The tower is 62 feet high, and the light can be seen at a distance of about 15 miles. Mr. Bernard Kean was appointed keeper of the light on the 31st May last, at a salary of $150 per annum.

Keeper Kean, who had been repeatedly complimented as an excellent keeper, resigned in 1881 at the age of seventy-two, and Samuel Scarlot was appointed in his stead. Lightkeeping must not have appealed to Scarlot, as he resigned just over a year later. Ward Plumb was placed in charge of the light in 1882, and he served until 1901, when the minister of Marine and Fisheries recommended that in the public interest the appointment of Mr. Plumb be cancelled. John Fraser was made keeper in 1901 and served until at least 1903.

Windmill Point Light was improved in 1922 through the installation of a triple-mantle burner, and then in 1928 the light was electrified. The lighthouse continued to serve mariners until 1978, when it was discontinued.

The Friends of Windmill Point opened the lighthouse to the public in 1996, allowing visitors to enjoy a spectacular view up and down the St. Lawrence River from the best vantage point in the area. In 2004, Parks Canada repaired cracks in the tower that worsened after an earthquake struck the area two years earlier.

The federal government designated Windmill Point Lighthouse a heritage lighthouse in 2013. In 2015, the lighthouse was closed so that the roof could be repaired and the stair railings could be brought up to code. A $373,000 federal grant helped pay for the work, which was carried out by a local contractor.

From Highway 401, take Exit 716 and drive south on Edward Street for 1.6 km (1 mile) to the river, and then turn left onto King Street. Drive east on King Street for 2.2 km (1.4 miles), and then turn right on Windmill Road, where you will find Windmill Point Lighthouse at Battle of the Windmill National Historic Site.

The lighthouse is open from 10 a.m. to 4 p.m. daily in July and August, from Wednesday to Sunday in June, and on weekends in September.

The lighthouse is owned by Parks Canada. Grounds open, tower open in season.