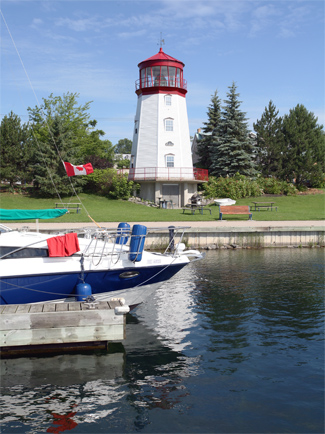 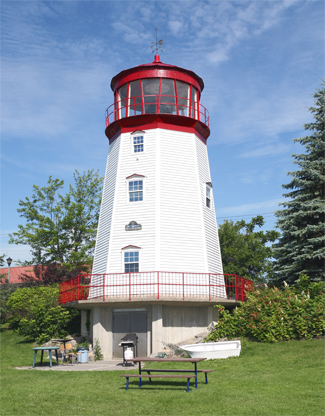 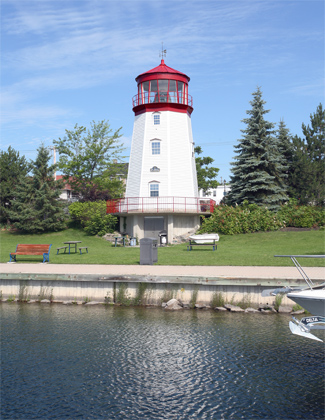 A redbrick building, constructed along the waterfront in Prescott in 1900 by the Imperial Starch Company, served as a Dominion Lighthouse Depot from 1903 to 1985. During World War II, war materials were manufactured in the building. The Canadian Coast Guard occupied the building in 1962 but moved into a new facility in 1985, and the old lighthouse depot was demolished in 1986.

An oversized lantern room that was mounted atop the lighthouse depot and used to train lighthouse keepers was retained and placed atop a tower built by the local Rotary Club at the harbour in 1989. The base of the modern tower is home to an ice cream shop during the summer, and visitors were allowed to climb the tower and admire a Fresnel Lens for some time, but due to a change in building codes climbing to the top is no longer permitted.

Since 2003, the St. Lawrence Shakespeare Festival has been presenting plays in an outdoor amphitheater near the harbour in July and August.

For a larger map of Prescott Lighthouse, click the lighthouse in the above map.

From Highway 401, take Exit 716 and drive south on Edward Street for 1.6 km (1 mile) to the river, and then turn left onto Water Street, where you will find Prescott Rotary Lighthouse, overlooking Sandra S. Lawn Harbour and Marina. The base of the tower is home to an ice cream shop during the summer.

The lighthouse is owned by the Town of Prescott. Grounds/tower open in season.