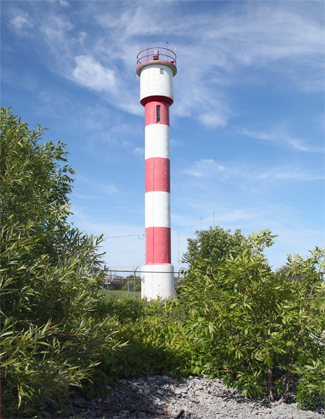 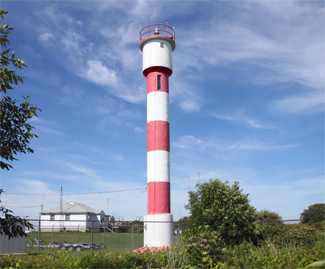 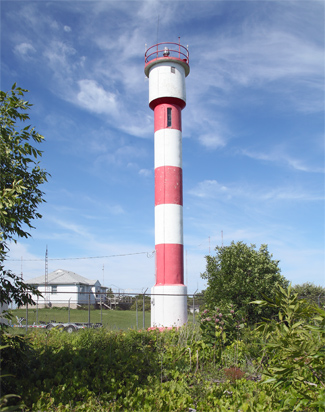 With the completion of the Murray Canal in 1889, Prince Edward County became an island. The eight-kilometre-long canal joined the Bay of Quinte to Presquile Bay on Lake Ontario and severed the countys only link to the Ontario mainland, though swing bridges were erected to span the canal. Before the completion of the canal, mariners traveling between Toronto and Kingston had to travel several kilometres out into Lake Ontario to round Point Petre, the southern tip of Prince Edward County.

On January 20, 1832, a statute was passed, entitled An Act for granting His Majesty a sum of money to defray the expense of erecting a Light House between Nicholsons Island and the Ducks, and for appointing Commissioners to superintend the erection of the same. Of the five commissioners appointed, three felt the lighthouse should be placed on Point Petre, known among mariners as Long Point, while one thought it should be on Salmon Point seven miles to the west, and another felt Gravel Point six miles to the east would be the best site. After consulting with masters of steamers and other vessels, Point Petre was chosen, and six acres of land on the point were purchased for £12 from Benjamin Gerow.

Tenders were invited for the construction of the lighthouse, and on June 6, 1832 a £398 contract was awarded to Robert Matthews and Mr. Scott for performing the necessary masonry and carpentry work by September 15, 1832. The circular stone tower was to be sixty-one feet tall with an external diameter of seventeen feet and an internal diameter of ten feet, two inches. The walls were to be three feet, six inches thick at the base and two feet thick at the top, with six windows admitting light into the tower. An excavation of at least two feet, six inches was required for the foundation, and the foundation walls were to be four feet, five inches thick. The entrance to the tower was to be through a two-inch-thick, tongue-and-grooved door that was topped by a fan light.

Thomas Mason, a blacksmith, was paid £164 for providing the lantern room, and Winslow Lewis of Boston, Massachusetts supplied the lamps, sixteen-inch reflectors, and 150 panes of fourteen-by-twelve-inch glass for the lantern room. Winslow Lewis provided lighting apparatuses for many of the lighthouses built in the United States around this time, and he also erected several towers as well.

Point Petre was finished on November 18, 1832, roughly two months late, after Mr. Scott, one of the contractors died, and Robert Matthews suffered a severe illness arising from an attack of the epidemic prevalent in the area.

Owen Richards, who served as a Loyalist in the American Revolutionary War and as a captain and company commander during the War of 1812, was hired as the first keeper of Point Petre Lighthouse. No dwelling was provided for in the act that authorized the lighthouse, and then after one was built, rising lake levels made living at the point quite miserable. Keeper Richards struggled to survive on his annual salary of £62, and in November 1836, he penned the following petition to the government as part of a request for a raise:

That your Petitioner hath no privilege or benefit from the Six Acres of Cedar Swamp land that is attached to Point Peter Light House, with scarcely any soil on a smooth limestone and without any fire-wood upon it for the use of either the Dwelling House or Light House, and has, for three years past, paid ten pounds a year for pasture and fire-wood; and in a dry season there is no pasture, and in a wet one the greater part of the land is under water  after being to the great expense of clearing the six acres of a very bad cedar swamp, and fenced it, and planted out a number of fruit trees of different kinds, and made and laid out a good garden; and now your Petitioner can receive no profit for all his labor and expenses, for the high water has this season destroyed the whole, and it has been from six to eight inches deep between the Dwelling house and the Light House for as much as two months and upwards, and no way to get from the Dwelling House to the Light House without wading through it, until your Petitioner went to the expense to gravel the walk, and cover it with sod, to make it passable for the present; and much more labor will be required another season to make it good, because the Light House is situated on low ground; and it requires much more attention to keep the Light House in good order than the public is aware of.

In 1843, Point Petre Lighthouse was changed from a fixed white light to one showing a white flash every thirty seconds so that it could be easily distinguished from the lighthouses on False Duck Island and on Presquile Point. A pier was built in 1860 to protect the lighthouse from the encroaching waters of Lake Ontario.

Keeper William Palen received unexpected visitors at Point Petre on June 24, 1875. The previous afternoon, Washington Donaldson, a balloonist with the P.T. Barnum circus who was known as much for his failures as his successes, lifted off from Toronto on his 125th voyage with three newspaper reporters. A southeast wind carried the balloon out over Lake Ontario, and at 3:30 the following morning Captain Minaker of the schooner Flying Seud spotted the balloon scudding along Lake Ontario at a spanking rate with the basket dragging its way through the water.

Minaker launched his yawl boat and after a heroic effort rescued the occupants of the basket. The reporters recounted that for the last four hours they had been immersed up to the edge of the basket which was pulled through the water at an alarming rate of speed. After recuperating at Point Petre Lighthouse, Donaldson and the three reporters were taken to Picton, where they caught a steamer to Belleville. Donaldson launched his balloon at Chicago the following month, and similar to what happened at Toronto, it drifted out over the nearby lake. This time, however, Donaldson wasnt as lucky, as a violent storm struck that evening. The body of the reporter traveling with Donaldson eventually washed ashore on the other side of Lake Michigan, but Donaldsons body and the balloon were never recovered.

J.C. Innes of Kingston was awarded a contract in 1889 to erect a fog alarm building at Point Petre for $1,000, but when he refused to start the project, the work was transferred to Messrs. Irving and Fegan of Picton. During the delay caused by the transfer of the project, William H. Noble, foreman of work for the Department of Marine, built a stone breakwater, faced by steel plating, seaward of the tower to house the rectangular fog alarm building.

The foghorn protruded from the southern face of the wooden fog alarm building and sounded nine-second blasts separated by intervals of twenty-eight seconds of silence when needed. The total cost for the fog alarm, which was placed in operation on November 21, 1890, came to $2,450.28. In 1910, the fog alarm building was remodeled to allow for the installation of a three-inch diaphone plant with twelve-horsepower engines, which was supplied by the Canadian Fog Signal Company of Toronto. The new fog alarm produced a three-second blast every thirty seconds.

The lightstation was struck by lightning in 1917. The extent of the damage isnt known, but repairs had to be made at a cost of $430.41. In 1922, the keepers dwelling was destroyed by fire and had to be rebuilt.

A radiobeacon was added to the station in 1959 to help mariners determine their position on Lake Ontario. Mariners could take their bearings from multiple radiobeacons to pinpoint their location on the lake, or if a stations radiobeacon and fog signal were synchronized, like they were at Point Petre, these two signals could be used to determine a vessels distance from that station. The published Light List explained how the calculation could be made:

Whenever the sound signal is operating a group of two radio dashes (1 second and 5 seconds in the case of Point Petre) is transmitted at the end of each radiobeacon minute of operation. A group of two sound signal blasts of corresponding length is sounded at the same time. When within audible range of the sound signal, navigators on vessels with radio receivers capable of receiving the radiobeacon signals may readily determine their distance from the station by observing the time in seconds which elapses between hearing any part of the distinctive group of radio dashes, say the end of the long dash, and the corresponding part of the group of sound blasts, say the end of the long blast, and dividing the result by 5 for statue miles. The error of such observations should not exceed 10 percent.

This method is similar to determining your distance from a lightning strike by counting the number of seconds between the flash and the corresponding thunder clap and dividing by five.

The present nineteen-metre-tall, red-and-white striped tower was erected in 1967 to replace the 1833 tower located at the tip of the point. While negotiations were ongoing with a local historical society about saving the old lighthouse, a government crew came in and demolished the stone tower. Locals protested the action, but there was little to be done after the fact. Assistant Keeper Leonard Goodmurphy did remove a lamp before the lighthouse was dynamited, and the historical society salvaged a few pieces of the old tower.

In 2013, Hastings Prince Edward Land Trust applied to take ownership of the lighthouse.

For a larger map of Point Petre Lighthouse, click the lighthouse in the above map.