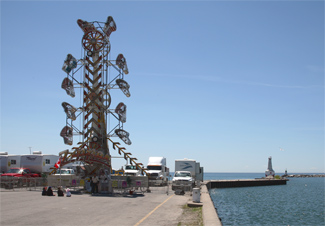 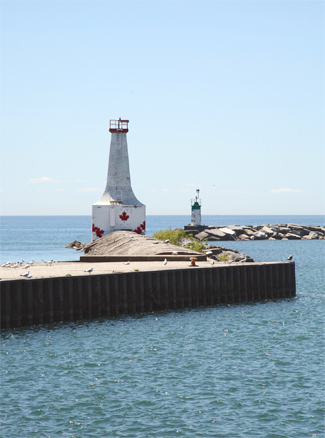 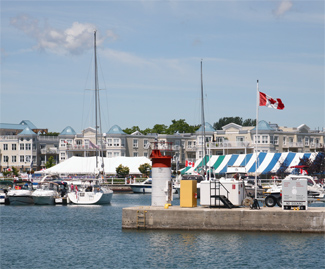 Cobourg was so named in 1819 in honour of the marriage of Princess Charlotte, daughter of King George IV, to Prince Leopold of Saxe-Coburg-Saalfeld, and by 1827, the village boasted a population of 350, with forty residences, two churches, four stores, two inns, and a gristmill. As Cobourg lacked an adequate natural harbour, a group of prominent businessmen formed the Cobourg Harbour Company in 1829 to turn a lakeside marsh into a proper harbour. Using £2,495 the company had raised and a £3,000 loan from the provincial government, an east pier that extended over 500 feet into the lake was completed in May 1832. In 1839, the term for completing the harbour was extended four years, and the capital stock of the company was increased to £10,000. The Cobourg Harbour Company added a west pier, but when the condition of the piers deteriorated and one of them was breached, it asked the provincial government for help completing the harbour.

After considerable debate, the government decided to step in provided that the harbour be turned over to the Board of Woks and that the money previously loaned and the expense to complete the work would be the first repaid from the levies collected at the port. Between 1842 and 1845, the east and west piers were repaired and extended, and a lighthouse was added. The cost for the lighthouse, which was erected by McBeath & Cook and consisted of was a square, wooden tower with a height of sixteen feet, was £137, while the entire project came to £10,517.

The Town of Cobourg took control of the harbour and lighthouse in 1850, and not long thereafter a railway was extended from Cobourg to Peterborough. Ambitious civic leaders felt that linking the markets at Peterborough to its harbour would allow Cobourg to rival Toronto and Kingston. A straight line between the two towns runs through Rice Lake, and rather than go around it, the builders of the railway constructed what was the worlds longest trestle bridge to span the lake. Just days after opening, ice floes damaged the bridge, an issue that would plague the railway throughout its history. The railway did enhance Cobourgs standing as in 1856 fourteen million feet of lumber and 200,000 bushels of wheat were shipped from its piers. In 1867, the southern portion of the Cobourg-Peterborough line was used to connect Cobourg with the mines at Marmora, and during the next decades, iron ore was shipped across the lake to foundries in the United States.

In 1874, the Canadian government built a long breakwater on the western side of the harbour to address the issues of silting and exposure to the open lake that had hurt the harbour in the past. The breakwater was named Langevin Pier after Sir Hector Langevin, Minister of Public Works at the time. In 1883, the Department of Marine erected a beacon on the west pier that consisted of fixed red dioptric light raised to the top of a mast with a wooden shed at its base. Robert Gordon was hired as keeper of the beacon at an annual salary of $100.

After the east pier was extended, a fixed white mast light was established at its outer end in November 1886. This pierhead light was in addition to the existing white light maintained in the tower located farther inland on the east pier.

Canadas Grand Trunk Railway and the Buffalo Rochester & Pittsburgh Railway formed the Ontario Car Ferry Company in 1905 to connect the two lines with cross-lake ferries running between Rochester and Cobourg. The first ferry, Ontario No. 1, was launched in 1907 and was capable of carrying thirty railroad cars at a top speed of fifteen miles per hour. Coal from the mid-Pennsylvania coal field was the primary cargo for the ferry. Ontario No. 1 began carrying passengers in 1909, and many Americans crossed the lake to vacation at Cobourg. A second ferry, Ontario No. 2, was added in 1915, and the two vessels remained in service until 1949, when the advent of diesel locomotives reduced the demand for coal.

In 1910, Randolph, McDonald & Company of Toronto erected a reinforced concrete gas beacon on the west pier, and T.H. Brewer supervised the erection of a temporary wooden fog alarm building on the east pier to house a one-and-a-half-inch diaphone plant power by a four-horsepower engine. In September 1915, a new concrete beacon was completed on the end of the west breakwater.

The present pyramidal, concrete lighthouse on the east pier at Cobourg was built in 1924. In 2013, Unlimited Painting of Brighton was hired to paint the lighthouse at a cost of roughly $56,500. Over a three-week period, loose and flaking paint was removed and a white elastomeric Carboline coating that can expand and contract with temperature changes was applied to the tower. Once the contractors were finished, town staff painted red maple leafs and the towns name on the white tower, a move that upset some historians.

For a larger map of Cobourg East Pierhead Lighthouse, click the lighthouse in the above map.

From Highway 401 east of Toronto, take Exit 474 and drive south on County Road 45 (Division Street) to Cobourg. Follow Division Street for 3.2 km (2 miles) until it ends at Victoria Park. From the park, you can walk the east pier to view the light.


Cobourg Pier serves a few other purposes besides protecting the harbour and anchoring a light. Each year around Canada Day, it is home to Cobourg Waterfront Festival, and it also served as the Martha's Vineyard ferry pier in the movie Losing Chase, which stars Helen Mirren and Kyra Sedgwick and was directed by Kevin Bacon.