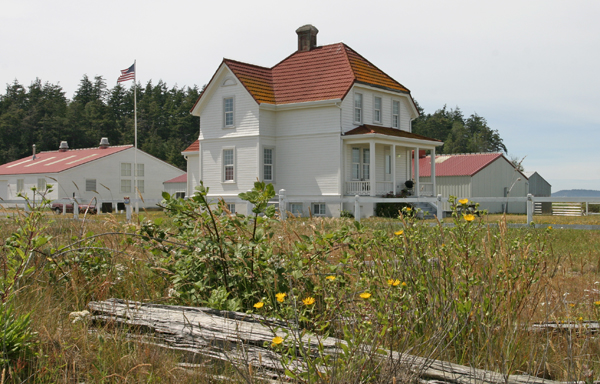 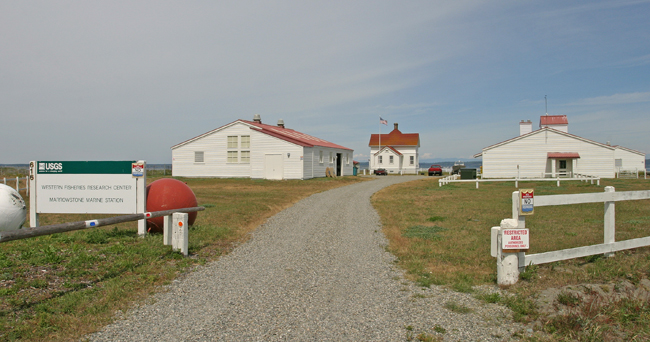 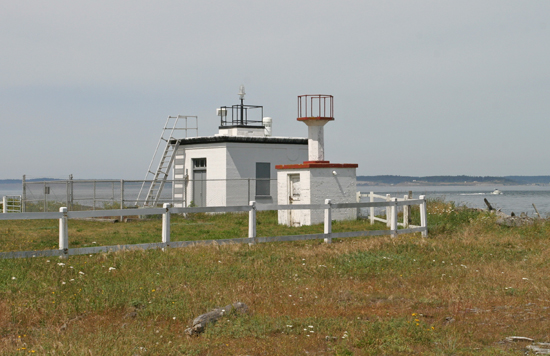 Extending from the base of the bluffs on the northeast end of Marrowstone Island is a low, level piece of ground known as Marrowstone Point. The point was so named by Captain George Vancouver for the clay visible in the bluffs above the point. After visiting the site in May 1792, Vancouver wrote:

In most of my excursions I met with an indurated clay, much resembling fullers-earth. The high steep cliff, forming the point of land we were now upon, seemed to be principally composed of this matter; which, on a more close examination, appeared to be a rich species of the marrow stone, from whence it obtained the name of Marrow-stone Point.

The name Marrowstone was eventually extended to the entire island.

Marrowstone Point forms the eastern entrance to Port Townsend Bay and was first marked by a lens lantern on a pole on October 1, 1888, around the time when several such aids were established on Puget Sound. To supplement this red light, the Lighthouse Board made the following recommendation in 1892:

A large fog bell here would be of great service to the commerce of these waters. It would mark the sharp turn in the course entering or leaving Puget Sound. In case appropriation is made to replace the bell now at Point No Point with a first-class fog signal, the bell taken from there can be established at Marrowstone Point. It is estimated that the bell can be set up and that the necessary buildings for the accommodation of the keeper can be erected for $3,500.

Congress appropriated the requested amount on March 3, 1893, but it would take two years before the needed land was obtained and plans and specifications for the structures were prepared. The contractors finished a one-and-a-half-story, six-room keepers dwelling with an attached fog-bell tower in March 1896, and the fog bell was placed into operation on April 7, 1896. During periods of fog or low visibility, the 1,200-pound bell was struck a double blow every fifteen seconds by a hammer operated by a Gamewell striking apparatus.

The following Notice to Mariners was published to advertise the stations imminent completion:

The Lighthouse Board gives notice that on or about April 7 a fog bell will be established at Marrowstone Point post light station, the northeast extremity of Marrowstone Island, Admiralty Inlet, Washington. During thick or foggy weather, the bell will be struck by machinery a double blow every fifteen seconds. The bell will be suspended sixteen feet above the ground, in front of the keepers dwelling, recently erected. The dwelling is a one and one-half story wooden structure, painted white, with lead colored trimmings and red roof.

In 1902, the bells characteristic was changed to a single blow every fifteen seconds.

The first keeper at Marrowstone Point was Osmore H. Morgan, a seventy-year-old former sea captain, who had spent the prior fourteen years as head keeper of New Dungeness Lighthouse. Keeper Morgan served until his passing in 1907, when Nettie E. Race, his daughter who had been taking care of her widowed father, was briefly placed in charge of the light and bell. Axel Rustad was appointed keeper a few months later, and he and his wife, Karen, raised four sons on the point over the next decade. Water for the stations inhabitants consisted of rainfall that was stored in a 5,000-gallon, redwood tank, enclosed in a shed behind the dwelling.

A woodshed and boathouse were constructed at the station in 1898, and in 1902, a galvanized oil house and a shelter for the lens lantern were added. The boathouse was moved away from the shore in 1904 and converted into a barn.

The fog bell wasnt successful in keeping all ships safely away from Marrowstone Island. In July 1903, the side-wheel steamer North Pacific, with just fourteen passengers on board, struck Craven Rock off Marrowstone Point in a dense fog. The steamer began to leak badly, and all passengers were safely transported ashore by the steamers lifeboats and the tug C.B. Smith that responded to the steamers distress signals. Keeper Morgan provided food and shelter to the passengers and crew from the North Pacific until they were taken aboard the steamer Mainlander which had ran aground on Marrowstone Point the same morning but was able to back off at high tide. The North Pacific sank in deep water and was a total loss.

Shortly after the first keeper took up residence at the station, construction of Fort Flagler commenced on the bluff above. The fort was completed in 1907, and it became the third active fort guarding Admiralty Inlet. Together with the guns at Fort Casey on Admiralty Head and those at Fort Worden near Point Wilson, the batteries at Fort Flagler helped form a Triangle of Fire to prevent hostile vessels from entering Puget Sound.

On August 15, 1908, the 502-foot-long armored cruiser USS Colorado ran aground on Liplip Point, the southeast tip of Marrowstone Island. This incident focused attention on the paucity of aids to navigation in Puget Sound, and as a result Congress appropriated $30,000 on October 22, 1913 for new navigation aids and improvements to existing ones.

In 1914, Marrowstone Point received a new fog signal and light. On April 1, 1914, an experimental acetylene gun, housed in a small wooden structure thirteen yards northeast of the bell tower, took the place of the fog bell. The gun was detonated every thirty seconds, and mariners were requested to report the efficiency of the acetylene gun as a fog-signal to the lighthouse inspector in Portland. Two months later, on June 5, 1914, a new acetylene light was established atop a concrete structure. At this time, the lights characteristic was changed from fixed red to a two quick red flashes every six seconds.

The acetylene fog-gun at Marrowstone Point, of the type manufactured by William Moyes & Son of Glasgow, Scotland, was the first of its kind to be used in the United States. A gas regulator diaphragm, floating in a bath of oil, was slowly raised, under the pressure of acetylene gas supplied by storage tanks, until it released a trigger that fired the vapor in a discharge chamber. After each firing, the diaphragm sank, only to be raised again thirty seconds later by the pressure of accumulating gas.

These new aids on Marrowstone Point were not in operation too long, as a new light and fog signal building was built on the point in 1917 at a cost of $1,112. On December 17, 1917, the fog signal was changed from an acetylene gun to a third-class Daboll fog signal, powered by an electric compressor, that sounded a group of three blasts every thirty seconds from large trumpets protruding from three sides of the square cement building. On February 3, 1918 a new electric group occulting white light was exhibited at a height of twenty-eight feet from the top of the cement building with the repeating characteristic of two-and-a-half seconds of light, one-second eclipse, two-and-a-half seconds of light, four-second eclipse. The funds for the changes made in 1917  1918 were also drawn from the appropriation made in 1913.

Though automated in 1962, the station remains fairly intact. The property was transferred in 1972 from the Coast Guard to the Bureau of Sport Fisheries and Wildlife in the U.S. Fish and Wildlife Service, for use as a scientific research facility. The keepers dwelling serves as a guest house for scientists visiting the Marrowstone Marine Field Station, and the 1917 short, squat structure that housed the light and fog signal still stands at the waters edge along with the 1914 light tower. A flashing white light is exhibited from atop the 1917 structure, but a fog signal is no longer in use. Research in marine ecosystem health and marine fish health is conducted at the station.

For a larger map of Marrowstone Point Lighthouse, click the lighthouse in the above map.

Take Highway 116, also known as Flagler Road, onto Indian Island and then to Marrowstone Island. Follow the road to Fort Flagler State Park. Marrowstone Point Lighthouse is on the northeastern tip of the island. The area immediately around the keeper's dwelling is not open to the public, but you can walk the shoreline to view the light.

The station is owned by the US Geological Survey. Shoreline open, tower/dwelling closed.


Although the lighthouse isn't too remarkable itself, well-maintained Fort Flagler is an added incentive to make the trip to the end of the island. The historic fort housing is also available for vacation rentals. Call (360) 385-3701 for details.