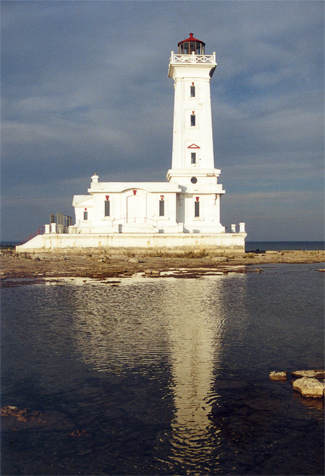 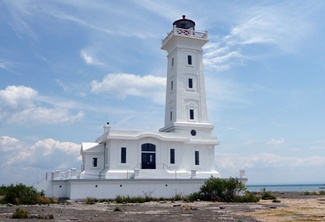 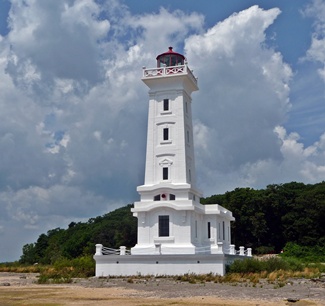 Near the eastern end of Lake Erie, just ten miles from Buffalo, Point Abino juts out from the Canadian shore, creating a serious navigational hazard. One of the early residents of the point was Father Claude Aveneau, a Jesuit missionary working with the native First Nation, and the points name is a corruption of his name  this helps explain the interesting way Abino is pronounced by locals.

In 1892, Buffalo developer Isaac Holloway acquired the point, subdivided it into lots, and then sold the entire property to twenty-one wealthy Buffalo businessmen, who formed the Point Abino Association. For many years, access to the point was via the yacht Marion L, which shuttled people between Buffalo, Crystal Beach, and the point. A road was later extended to Point Abino, but the mostly American enclave still retains much of its exclusivity, being a gated community.

An article in a December 1898 edition of The Buffalo Courier records an early request for a lighthouse on Point Abino:

If there is one thing lake men need more than another in the matter of signals and lights, said a captain last evening, its a lighthouse and fog horn on Point Abino. With the present lights and signals, few masters would care to attempt to run into Buffalo on a bad night, especially if there was a heavy fog or a driving snow storm. The trouble is Point Abino. Once I have that, I can make Buffalo easy. Without a light there, I had rather put my vessel before the wind and stick the night out above, than attempt to enter the harbor when, as I say, a snowstorm is raging.

Point Abino, however, is on Canadian territory, and as there are few Canadian boats interested in the matter of a lighthouse there, it would be almost a miracle were one ever erected. And yet it might be accomplished, with the present conciliatory spirit existing between the two countries.

The Shipmasters Association petitioned the United States government in 1907 to place a lightship in American waters, just over the international boundary line off Point Abino, to serve as a guide for vessels approaching the port of Buffalo. A bill was introduced in Congress that same year making an appropriation of $150,000 for this purpose, but it failed to pass. Three years later, a lighthouse bill approved on June 17, 1910 authorized construction of a lightship to be stationed between Sturgeon, New York and Point Abino at a cost of $75,000.

Lightship (LV) 82, a ninety-five-foot-long, steel-hulled vessel with a whaleback forecastle deck, was completed at the Racine-Truscott-Shell Lake Boat Company in Muskegon, Michigan on July 12, 1912, and then placed on station off Point Abino on August 3, 1912, after having been equipped with oil lanterns and a ten-inch steam whistle. LV 82s assignment to mark the approach to Buffalo was only to last until LV 96, the lightship for which $75,000 had been authorized, could be completed.

In November 1913, two massive storm fronts converged on the Great Lakes producing what is now referred to as the Big Blow, the Freshwater Fury, the White Hurricane, and most commonly the Great Storm of 1913. The most destructive natural disaster ever to hit the Great Lakes, this blizzard with hurricane-force winds caused major shipwrecks on all the lakes save Lake Ontario. Lake Huron suffered the most with eight ships going down along with nearly 200 crewmembers. On Lake Erie, LV 82 was the only sizeable vessel lost with all six of its crew. Only the body of Charles Butler was ever recovered, and this wasnt until fifty weeks after the sinking when it was found floating in the Niagara River.

Roscoe House, the superintendent of the tenth lighthouse district headquartered at Buffalo, could hardly believe that a lightship designed to weather storms at anchor could have been lost. The lightship ought to weather any gale, as it has its own power and is a staunch steel boat, he said. The fact that life preservers, and parts of railing or small doors were picked up on the beach near Michigan Street is not seriously significant, for the upper works might be washed off and everything on the upper part of the lightship, yet the boat would weather the gale. After the lighthouse tender Crocus returned from a fruitless search for the lightship and remains of the vessels two auxiliary boats had been found, House must have accepted that the unthinkable had indeed happened.

A fisherman walking a beach happened upon a wooden hatch cover bearing the message: Goodbye Nellie. Ship is breaking up fast. Williams. By this time, Anna Marie Williams, wife of the captain of the lightship, had arrived in Buffalo, and she believed the message was for her even though she said the captain never called her Nellie. Mrs. Williams reasoned that seaman William Jensen must have written the note for her husband and simply made a mistake under the cruel circumstances.

On May 13, 1914, a diver from the lake survey steamer Surveyor positively identified the wreck of LV 82 in sixty-three feet of water, nearly two miles off station. A buoy was placed to mark the wreck, and the task of raising the lightship was turned over to commercial salvagers. After two companies failed, the Reid Wrecking Company of Port Huron finally succeeded in bringing the lightship back to the surface with the help of pontoons on September 16, 1915. A refurbished LV 82 later served as a relief lightship from 1916 to 1925, and then on Eleven Foot Shoal in Lake Huron from 1926 to 1936.

In 1915, William P. Anderson, the Chief Engineer of the Department of Marine and Fisheries, prepared plans and specifications for a first-class lighthouse to be built on Point Abino out of reinforced concrete. Though the Lake Carriers Association was hopeful the light would be established in 1916, delays in procuring the site pushed back construction, and the miracle lighthouse was not placed in operation until October 1917. Summer residents on the point protested the inclusion of a fog alarm in the lighthouse, but this additional aid for mariners was considered essential.

The Lake Carriers Association announced the establishment of Point Abino Lighthouse in its annual report for 1917:

For a number of years mariners have been urging a suitable light and fog signal at Point Abino, Lake Erie. While the Point is inconspicuous, there are outlying reefs, which in thick and smoky weather make shipping to and from Buffalo extremely hazardous, and the necessity for a proper aid has been very great.

It is therefore, with much satisfaction that announcement is made of the establishment of a fine new combined lighthouse and fog alarm building, which was completed and went into operation about October 1, 1917. The station is located on the flat limestone beach, 225 feet south from the wooded shore on the south extremity of the point, with a keepers dwelling house erected on the short nearby.

The fog alarm is a 3-inch diaphone instrument operated by compressed air, and gives a triple blast every minute. The machinery is in duplicate throughout, and consists of two 12 H.P. units operated on natural gas.

A 1969 article in the Buffalo Courier-Express noted that while automation, as relentless as an auctioneers hammer and his cry of going-going-gone, had claimed most of the lighthouses on the Great Lakes, Lewis Anderson was still serving as keeper of the Point Abino Lighthouse.

Perhaps in just a few years, this job will be gone, too. They never warn, just do it, said Keeper Anderson, who had served as a sergeant major in the Canadian Army during World War II. So-called progress is catching up with us, and its only 12 years ago that our beacon was pressurized kerosene light. Anderson admitted that big boats were much safer with their modern navigational aids and radar and didnt rely on the lighthouse as much, but there were now more small craft on the lakes, and money rather than knowledge was the sole requirement for operating them.

Andersons job lasted longer than just a few more years. He was retained as keeper until the light was automated in 1989, and then continued to serve as a caretaker. Point Abino Lighthouse was discontinued in 1995.

The significance of Point Abino Lighthouse, which was built in a Classic Revival style, was recognized when the lighthouse was declared a National Historic Site of Canada in 1998.

The Town of Fort Erie acquired the lighthouse and its nearby keepers dwelling from Public Works Canada in April 2003. In June 2009, the federal government offered $425,000 through the National Historic Sites of Canada Cost-Sharing Program to be applied toward the estimated $1.3-million worth of improvements the lighthouse needed. In order to come up with the remaining amount, the town decided to sell the keepers dwelling.

In March 2011, the Fort Erie town council approved the expenditure of $1 million from the towns facilities maintenance reserve fund, $425,000 from the Parks Canada grant and around $6,500 from a lighthouse reserve fund for the restoration of the lighthouse. Proceeds from the sale of the keepers dwelling would be go to the maintenance reserve fund, but the property was still for sale at the time of the councils 4-2 decision, and the asking price had dropped from the initial $899,000 to $649,000.

Under the direction of Phoenix Restoration Services, restoration of the lighthouse began in May 2011 and was substantially completed by the following October. Patching corroded areas in the reinforced-concrete tower constituted most of the effort, but bronze handrails and replicated steel windows were also installed, and the lantern room, access ports, and the fog horn were also restored. The keepers dwelling was purchased by the president of Phoenix Restoration Service for $450,000 when there was a motion to cancel the contract for the renovation of the lighthouse.

On May 1, 2017, Point Abino Lighthouse was relit in time to celebrate its 100th anniversary. The light had been dark since its decommissioning in 1995. Point Abino Lighthouse Preservation Society negotiated with the Coast Guard and the Town of Fort Erie for over a year to make the relighting possible. The light will shine each year from May through October. The light was installed inside the historic Fresnel lens that is still mounted in the lantern room, but the lens will not rotate like it used to. Instead, an isophase switching system will be used to produce the light's characteristic of two seconds of light followed by two seconds of darkness.

For a larger map of Point Abino Lighthouse, click the lighthouse in the above map.

The lighthouse is owned by the Town of Fort Erie. Grounds/tower open during tours.


In the made-for-TV movie Lady Killer, Janice Mitchell (Judith Light), with a grown child and a frequently absent husband, feels a bit lonely and neglected and has an affair. Only later is it revealed that she is in charge of the rehabilitation of a lighthouse (Point Abino Lighthouse) located near her lakeside vacation home. With such a worthy project one must wonder how she could have felt her life was so empty. She ends up not only with a lighthouse to save but also her marriage and the lives of her husband and daughter. The movie has great shots of the interior and exterior of the lighthouse, including one scene that shows an active clam-shell Fresnel lens in the lantern room.