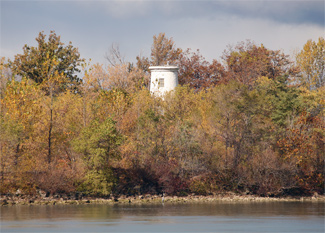 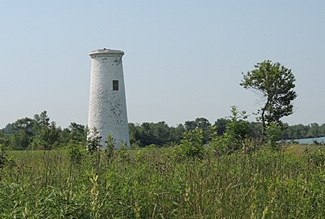 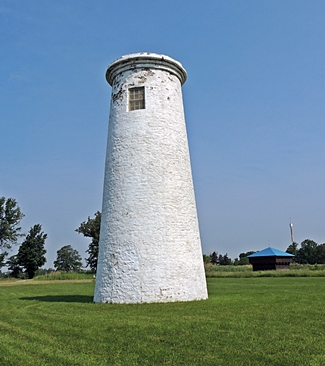 On April 16, 1835, Robert Reynolds and Charles Fortier were appointed commissioners to oversee the erection of a lighthouse to mark the entrance to the Detroit River from Lake Erie. In order to determine the most suitable site for the lighthouse, the commissioners consulted several experienced captains, both British and American, and found that they were unanimous in wanting the light on the southern end of Bois Blanc Island, rather than on Bar Point, a hazardous shoal that extends well into Lake Erie from the Canadian shore. Bois Blanc Island, French for White Woods Island, was named on account of its numerous white-barked birch and beech trees, and is today commonly known as Boblo Island, an English corruption of the original name. Building the lighthouse on the island instead of the shoal presented several advantages: a shorter tower could be used due to the height of the island, constructing a foundation would be less expensive, and the island was already owned by the government. Even with these cost-saving advantages, the lowest tender for the lighthouse and keepers cottage was still £275 more than the £800 provided by the Parliament of Upper Canada.

Parliament provided an additional £300 in April 1836, allowing John Cook, the lowest bidder, to carry out the work that year. When the lighthouse was completed, merchants and ship-masters urged the commissioners to place it in operation as soon as possible. James Hackett volunteered to serve as keeper until an official appointment could be made, and the commissioners provided oil so the light could serve mariners from November 7, 1836 until the close of the navigation season in mid-December. Masters of vessels said the lighthouse, which produced a most brilliant and steady light, was superior to any on Lake Erie.

James and Mary Hackett started their family in Scotland before immigrating to Upper Canada, where James served for nearly twenty years as a captain on the Great Lakes before being placed in charge of Bois Blanc Lighthouse. The Hacketts peaceful existence at the lighthouse was interrupted on January 8, 1838, when a group of sixty Canadian Patriots and American sympathizers landed on the island and forced the evacuation of the family and a small military guard. Part of the Upper Canada Rebellion, the invasion of Bois Blanc Island ended after just one day when the rebels vessel ran aground near Amherstburg. All aboard were captured, and those remaining on the island quickly retreated.

Bois Blanc Island Lighthouse stood forty-five feet tall from its base to the centre of its lantern room and has a diameter of eighteen feet. The stone towers tapered sides are interrupted by three windows and topped with a cornice of stepped corbelling. In 1861, six lamps and reflectors were being used in the lantern room to produce a fixed white light while consuming roughly 322 gallons of animal and vegetable oil during the season. Whale oil was originally used at the lighthouse, but when demand drove its price skyward, other alternatives were sought. Coal oil was introduced into the stations lamps in 1864.

Andrew Hackett replaced his father as keeper in 1870, and in October 1875, his responsibilities increased when a pair of range lights was placed on the northeast point of the island. The range lights were separated by 450 feet, and the front one exhibited a fixed white light while the rear one displayed a fixed red light. A fire destroyed the wooden front light tower in 1891, prompting the erection of iron skeletal towers to serve the range. The range lights were discontinued and the towers taken down in 1907.

In 1908, a fourth-order Fresnel lens replaced the array of lamps and reflectors used in the Bois Blanc Lighthouses lantern room while maintaining the lights fixed-white characteristic.

Keeper Andrew Hackett passed away on May 27, 1901, and Agnes Hackett, his widow, was placed in charge of the light, on condition of keeping a competent male assistant. Charles R. Hackett replaced his mother as keeper in 1910 and served until 1924, when an Aga system was installed in the tower, and the light became unwatched. Four members of the Hackett family, spanning three generations, served as the only keepers of Bois Blanc Lighthouse.

In October 1913, Grace Hackett, a daughter of Agnes Hackett, was living at the lighthouse when she tried to remove the rusted cover of a jar by placing the container in boiling water. Shortly after being submerged, the jar burst, sending shards of glass into her face. With both of her eyes cut, Grace was rushed to Grace Hospital in Detroit.

Rendered redundant by new navigational aids placed along the river, Bois Blanc Island Lighthouse was discontinued in 1959. Two years later, the historic tower was turned over to Parks Canada. In the 1970s, Parks Canada restored the towers entrance door and its semi-circular fanlight, but after these were damaged by vandals, the entrance was sealed with rubblestone masonry.

From 1898 to 1993, Boblo Island Amusement Park, known as Detroits Coney Island, thrilled visitors with rides such as Fallingstar, Wild Mouse, Sky Streak, and Nightmare. In addition to its rides, the park also had a dance hall that was financed by Henry Ford and could hold 5,000 dancers.

Since the closure of the amusement park, the northern end of Boblo Island has been developed into an upscale residential and resort community. Though visitors were initially not allowed, today they are encouraged to take the four-minute ferry ride to the island and enjoy the islands restaurant and many trails.

Bois Blanc Island Lighthouse and a nearby wooden blockhouse, built in 1839 after the rebels invaded the island, were together designated a National Historic Site of Canada in 1955. Between 2010 and 2014, a thorough restoration of the blockhouse, which was ready to collapse, was carried out by Bill Brundage, a retired elementary school teacher. The blockhouse, like most of the island, is owned by Dominic Amicone, but word is he may turn it over to Parks Canada. Now if only the lighthouse could receive some much-needed attention and a new lantern room.

Located on the southern end of Boblo Island near the confluence of Lake Erie and the Detroit River.
Latitude: 42.08697, Longitude: -83.11947

For a larger map of Bois Blanc (Boblo) Island Lighthouse, click the lighthouse in the above map.

Boblo Island is home to an exclusive planned community accessible by ferry. For a fee, visitors can use the ferry to access the island and walk to the lighthouse, the top of which can be viewed from Highway 18, just south of Amherstburg.