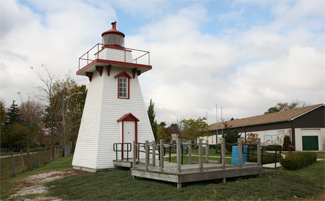 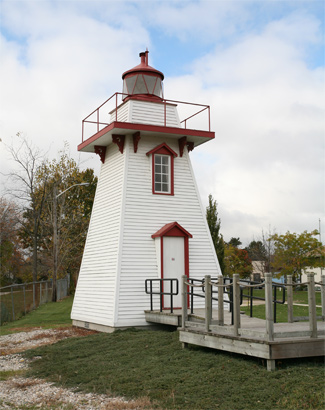 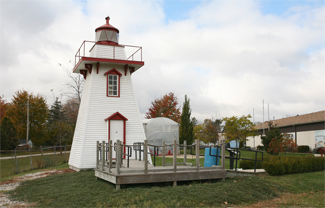 Kingsville, Canadas most southern town, was named after James King, its founder, and was known early on as Canadas Paradise Garden, due to its good climate and productive soil. Located roughly midway between the Detroit River and Point Pelee, the Village of Kingsville was incorporated into a town in 1901 on account of it being an important business centre, with a good harbor, and contiguous to a rich and well settled farming community.

Besides James King, two other men left their mark on Kingsville and the surrounding area. In 1899, Hiram Walker, a whiskey magnate, built the mammoth Mettawas Hotel in Kingsville. Served by his railroad, The Lake Erie, Essex, and Detroit River Railway, the hotel made the cool breezes of Lake Eries northern shore more accessible to Detroiters during the warm summer months. John Miner established a bird sanctuary outside Kingsville in the early 1900s, and through his pioneering use of banding, he was able to determine the migratory pattern of Canadian Geese. The Jack Miner Bird Sanctuary is located just north of Kingsville and is open to visitors.

The first lights to guide mariners to Kingsville were placed in operation in 1886 according to the following excerpt from that years Annual Report of the Department of Marine:

Since the 12th September last the entrance to the harbour of Kingsville, Lake Erie, has been lit by Captain W. J. Malott, wharfinger, the Department providing lamps and oil. The lights consist of a red tubular lantern, hoisted on a pole 21 feet high, on the outer end of the east breakwater pier, and showing a fixed red light to all points seaward from an elevation of 27 feet above the lake; also a fixed bright light in a front window of Captain Malotts dwelling, at the shore end of the same pier, N. 1/2 W., 1,020 feet from the front light and elevated 45 feet above the lake. These two lights in range lead in to the entrance of the harbour, the outer one being left on the right hand or starboard side in entering. They will be maintained throughout every season of navigation.

In 1888, the Department of Marine invited tenders for the erection of a back range lighthouse to replace the light displayed from Captain Malotts residence, but the bids received were so high, that the Department had William H. Noble, its foreman of works, supervise the construction of the lighthouse. This lighthouse, a square wooden tower, painted white and surmounted by a red iron lantern room, stood twenty-nine feet tall and displayed a fixed light at an elevation of fifty-five feet above Lake Erie. Built at a cost of $370.61, the lighthouse was placed in operation at the opening of navigation in 1889 and was visible from all points seaward for up to twelve miles.

On October 17, 1900, the fixed red light on the outer end of the east pier that served as the front range light was discontinued so that repairs to the pier could be made. The light, which continued to be a lens lantern hoisted atop a pole, was placed back in operation on July 22, 1901.

Keeper William J. Mallot died of pneumonia in 1890 at the age of sixty-seven and was replaced by his son Albert. In 1902, Keeper Albert E. Malott decided to pursue carpentry instead of lightkeeping, and W.H. Black was appointed keeper in his stead.

The colour of the light shown from the rear range was changed from fixed white to fixed red at the opening of navigation in 1904. At this time, the light was produced by a seventh-order lens. Keeper William Black petitioned the Kingsville Town Council in 1904 to have trees removed, noting that a person standing on the end of the pier cannot see the light for the trees.

In 1914, Keeper Black, who also served as harbour master, was given a hand-operated foghorn, which was to be used to answer signals from steamers in the vicinity of the station during thick weather. In 1929, a short-focus reflector replaced the seventh-order lens being used in the back range light tower.

The rear range light was discontinued in 1936, leaving just the foghorn and the fixed red light at the end of the east breakwater pier to serve mariners trying to make the harbour at Kingsville. A flashing green acetylene light was established ten feet from the outer end of the west breakwater pier in 1946, and in 1959 a pair of range lights joined the pierhead lights in marking the harbour. The harbour continues to be marked by two pierhead lights and a pair or range lights to this day.

The rear range lighthouse discontinued in 1936 was later incorporated into a private cottage, and in 1973 it was relocated and placed on display at Lakeside Park. In 1991, the tower, then in a deteriorated condition, was moved to the grounds of Kingsville Historical Park, where it was restored between 1993 and 1995. A second more thorough restoration of the tower was finished in September 2003, with the assistance of a $60,500 grant from the Trillium Foundation, an agency of the Ministry of Culture.

For a larger map of Kingsville Lighthouse, click the lighthouse in the above map.

From Highway 18 in Kingsville, turn south onto Division Street and then just before your third street (Maple Street), turn left into the parking lot for Branch 188 Royal Canadian Legion. Kingsville Historical Park, which includes Charlie Campbell Memorial Museum Museum and Kingsville Lighthouse, are located at the end of the parking lot.