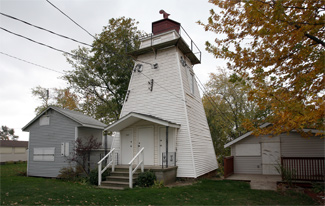 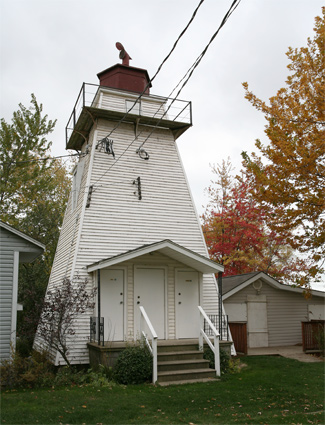 Leamington had its beginnings in 1833 when Alex Wilkinson obtained a patent for a lot located in what is now the heart of Leamington. After Wilkinson was joined by others, this early settlement was known as Wilkinson Corners until it received a post office in 1854 and William Gaines, the owner of a mill, suggested changing the name to Gainesborough. When it was learned that this name had already been used in the province, Gaines proposed naming the village Leamington, after his native town in Warwickshire England. Leamington had a population of seventy-five by 1858, and in 1869, the settlements first wharf, known as Scotts Dock, was established to support the areas lumber industry. Wigles Dock was added later along with one constructed by the Pigeon Bay Dock Company. Together, these three docks handled the shipments of tobacco, lumber, and produce reaped from the land surrounding Leamington.

Parliament appropriated $1,000 for the construction of a lighthouse at Leamington in 1879, and the following year, Peter Williams constructed a square, pyramidal tower at a contract price of $794. Leamington Lighthouse displayed a fixed white catoptric light at an elevation of forty-eight feet above the high-water mark, and Joshua Lamarsh was hired to serve as its first keeper at an annual salary of $150.

Keeper Lamarsh resigned after three years and was replaced by Forest H.C. Conover, who owned the land on which the lighthouse was built. The nearby streets of Forest and Conover are named in his honour.

In 1899, Leamington passed a law offering free water, gas and fire protection along with an exemption from taxation to attract new industry to the area. When the town council coupled this with a free plant vacated by the Ward Tobacco Company, it was enough to attract the Heinz pickle company to Leamington in 1908. A few years later, Heinz ventured into ketchup, and most of the local farms began growing tomatoes. The company expanded its presence in Leamington several times over the years, and today Leamington is known as the Tomato Capital of Canada. The towns information booth and water tower both pay homage to the towns most important crop.

The light at Leamington was improved at the opening of navigation in 1915 by substituting a fourth-order lens for the catoptric illuminating apparatus formerly used in the lantern room. In 1919, Keeper Conover was provided a hand-operated foghorn that was to be used to answer signals from steamers in the vicinity of the wharf during thick weather.

In late June 1923, a fourth-order flashing white electric light was established atop a pole on the outer end of the government pier, and Leamington Lighthouse and the hand-operated foghorn were discontinued. With his services no longer needed, Keeper Conover retired from lightkeeping at the age of sixty-seven.

The abandoned lighthouse and surrounding land were sold to Elmer Wallace Luford of Walkerville, Ontario in 1928, and shortly after this the property began to be used as a campground, where vacationers and locals could spend some time by the lakeshore. Later, semi-permanent cabins were built, replacing some of the tents that were commonly used at first.

In 1947, the lighthouse property became known as The Lighthouse Club, and at this time there were roughly sixty-four cabins between those located on the hill near the lighthouse and those down near the beach.

In the early morning hours of June 6, 2010, an F1 tornado touched down in Leamington causing widespread destruction. Some cabins were damaged beyond repair, but the lighthouse escaped without significant damage. The lighthouse has been transformed into restrooms for the community, and a clubhouse has been erected adjacent to it.

For a larger map of Leamington Lighthouse, click the lighthouse in the above map.

From Highway 34 (Talbot Street) or Highway 48 (Oak Street), turn south onto Erie Street and drive south towards Lake Erie. Turn onto Seacliff Drive, about two blocks before the lake, and then take your first left onto Forest Street. When Forest Street ends, turn left onto Park Street, and Leamington Lighthouse should be visible on your right in the private Lighthouse Club community.

The lighthouse is owned by Lighthouse Club. Grounds/tower closed.