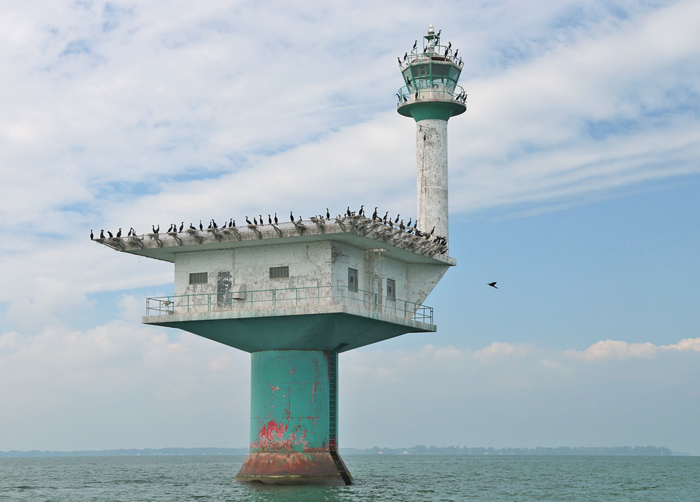 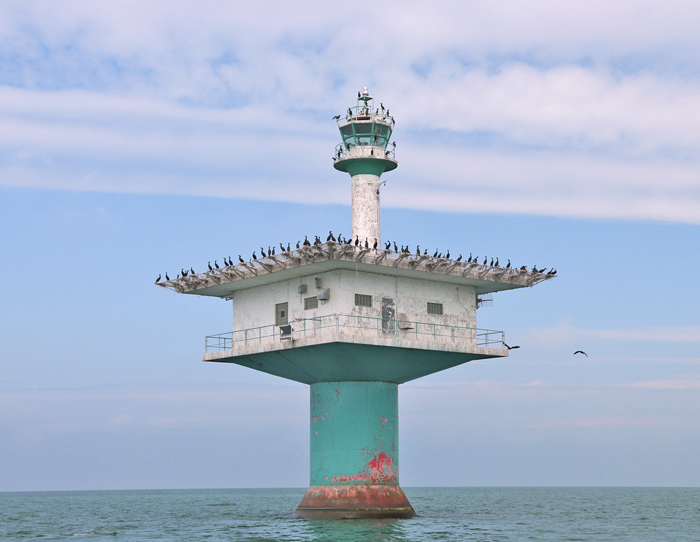 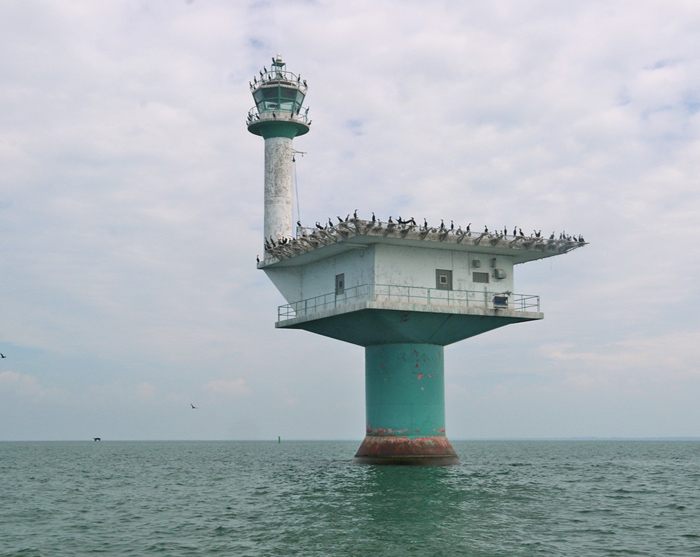 Point Pelee, which extends roughly sixteen kilometres into Lake Erie, is mainland Canadas southernmost point and defines the northern side of Pelee Passage that runs between the point and Pelee Island. A lighthouse was built on the northern tip of Pelee Island in 1833, and twenty years later, work began on a lighthouse to mark Point Pelee. As a reef extends offshore from the point, the decision was made to build the lighthouse atop heavy cribs placed just over a kilometre south of the point. With the necessary timbers cut and stone quarried, the first portion of the foundation for the lighthouse was sunk in 1855 atop the reef, which consisted of open-jointed, horizontally stratified limestone with a covering of sand. As the exposed location was subject to strong currents with ever changing velocity and direction as well as the sudden squalls for which Lake Erie is known, the work was attended with a vast deal of delay and trouble. After the first foundation was swept away by ice, William Scott, an engineer, was brought in to lead the construction in early 1856. He modified the plans from a foundation with vertical walls to an octagonal, caisson foundation with sloping walls that would better resist waves and ice. This framed structure, which was sixty-five feet wide at its base, thirty feet high, and fifty feet wide at its top, was launched on July 24, 1857, towed to Amherstburg where 600 tons of stone and hydraulic lime mortar were placed inside it, and then sunk on the reef on August 8 in nineteen feet of water.

The caisson foundation weighed about 5,000 tons and was surrounded by 3,000 tons of riprap. A temporary light was established atop the foundation on August 12, and work continued on filling the caisson up to within three feet of its top until October 31. Keepers remained on the structure to tend the temporary light until November 28, when navigation closed for the season. In his report on the foundation, Scott noted that one of those incidents, which sometimes are brought about by the hand of God, to illustrate his overruling providence, happened the night before the light keepers closed up for the season.

Captain Wye, of Mersea, with a crew of five persons in his scow, had left some of the ports on the American side of the lake, and was overtaken by that terrible storm of snow and cold weather, which took place in the latter part of November. They were caught in ice, which nearly cut their scow in pieces, and for two or three days were drifted about at the mercy of the winds, without power to help themselves. On the evening of the 27th of November, they drifted near the caisson, when they patched up an old skiff with some boards, and made their way to the foundation, where they passed the night in comfort, and next day returned with the Light-keepers to shore; but for this being in their path they would in all probability have perished on the lake.

William Scott submitted a plan for a conical stone tower, surrounded at its base by a keepers dwelling, for his octagonal caisson, but authorities opted instead to build a wooden, octagonal tower. A temporary light continued to be exhibited atop the caisson until 1861, when construction of the lighthouse was carried out. The octagonal tower stood sixty-one-feet tall, from base to vane, and its lighting apparatus originally consisted of seven lamps and reflectors that produced a fixed red light. Though living apartments were contained within the tower, a dwelling for the keepers was built on Point Pelee.

Since the wooden tower would be subject to fire, unlike the stone tower originally proposed, a large cistern was planned for the upper floor of the tower with a fire main feeding each of the lower floors that would have fifteen feet of hose. This preventative measure was finally installed in the lighthouse in 1864, but it proved to be insufficient at saving the structure.

A new onshore dwelling was built for the keepers in 1888, and the following year major work was performed at the offshore station. The exterior wooden walls of the caisson were replaced by a casing of steel plate, and a steam fog alarm was provided that sounded seven-second blasts separated by forty-five seconds of silence. The fog horn projected from the southeast face of the octagonal caisson at a height of twenty feet above the lake.

On April 17, 1900, the lighthouse and fog alarm at Point Pelee were destroyed by a fire that was thought to have started when a lamp was thrown down by displacement of the wall of the fog alarm building by the weight of a heavy sea running at the time. Head keeper William A. Grubb was trapped for some time under fallen timbers and seriously burned, and he and his assistant were lucky to escape with their lives. A temporary light was established atop the pier four days later, and though the caisson pier was still in good condition, authorities decided that it would be better to build a replacement lighthouse on the middle ground of Pelee Passage, where the light would be closer to the track of modern deep-draft vessels.

A steel caisson was sunk in thirteen feet of water on the north end of the middle ground on June 1, 1901, roughly eight kilometres southwest of Point Pelee Lighthouse. The new navigational aid, known as Pelee Passage Lighthouse, was placed in operation on July 4, 1902 and described as follows:

The tower is of steel plates, built in the form of the frustum of a cone, surmounted by a polygonal iron lantern, standing upon a cylindrical steel caisson filled with concrete and masonry, surrounded by a polygonal timber cribwork, rising 5 feet above the water level of the lake. The height of the lighthouse from the deck of the foundation pier to the vane on the lantern is 66 feet. The pier is brown, the tower white and the lantern red.

The light is elevated 75 feet above the level of the lake, and should be visible 14 miles from all points of approach by water. The illuminating apparatus is dioptric of the third order, and was purchased from Messrs Chance Bros. & Co., of Birmingham. It cost $3,216.47. The illuminant is oil vapourized and burnt under an incandescent mantle.

A steam fog siren, built into the base of the building, was put in operation on October 1, 1902. It projects from the north side of the tower at an elevation of 28 feet above the lake, and gives blasts of 7 seconds duration, with intervals of 30 seconds between them.

By 1962, the foundation of Pelee Passage Lighthouse had been heavily damaged, and in 1975 a modern structure topped by a helicopter landing pad with a cylindrical light tower at one corner replaced the steel-plated tower. Dean Construction Co., Ltd. was contracted to dismantle the lighthouse prior to the erection of the new one, and in 1980 the company re-erected the tower on the shores of the Detroit River as a gift to the City of Windsor.

For a larger map of Pelee Passage New Lighthouse, click the lighthouse in the above map.

This lighthouse is best seen from the water, but a distant view is possible from Point Pelee National Park.