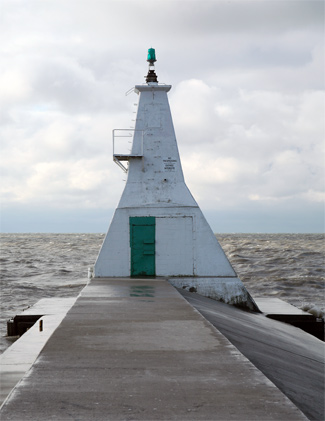 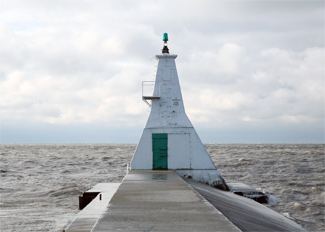 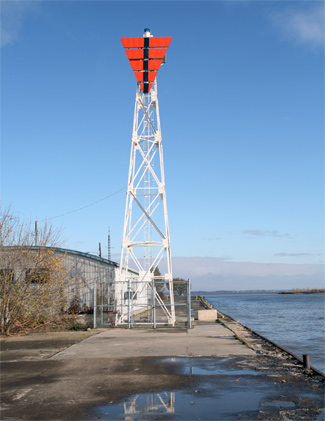 On the northwest shore of Lake Erie, an eight-kilometre-long, crescent-shaped sand spit, known as Pointe aux Pins, extends into Lake Erie forming a protected, oblong body of water. The French missionary-explorers Casson and Galinee camped on the bays shores in 1670 and wrote about the Ronde Eau or Round Water harbour, which is how Rondeau Bay received its name.

In 1843, the Board of Works for the Province of Canada noted that there was scarcely one harbour on the Canadian side of Lake Erie which was not in a state of dilapidation  in many instances so much so as to render it impossible for vessels to enter them. This inconvenience forced vessels to lay offshore and lighter cargo from shore, which greatly increased the cost of transporting the areas produce to market.

To remedy this evil, the Board of Works announced plans to convert the natural basin called the Rondeau into a good harbour, by the construction of a breakwater and two piers. When these were built, the Board believed the harbour would afford the advantages of easy entrance, perfect safety, sufficient water, and ample room to accommodate any number of vessels. Once a road was finished between Chatham and Rondeau, Chathams commerce could reach this section of Lake Erie by traveling just seventeen miles rather than the 150 miles it currently took by traveling down the Thames River, through Lake St. Clair, down the Detroit River, and across much of Lake Erie.

In 1844, the government started harbour improvements at Rondeau that included dredging the sandbar separating the bay and Lake Erie, building a pair of parallel piers, and erecting a lighthouse. For some reason, the government sold the harbour to the Rondeau Harbour Company for $8,000 in July 1851, with the condition that the works be properly maintained.

Less than two years after the sale, merchants from Chatham sent a letter to the government complaining that the lighthouse had not been kept for all of the 1852 season. A Mr. D. Brown was sent to examine the harbour and lighthouse, and in January 1854, he submitted his report, which included the following in regard to the lighthouse:

I was led firmly to believe that no light whatever had been kept up for the last two years, nor indeed any effort to keep up a light. On the east side of the light-house the weather-boarding has been torn of as if for the very pleasure of destruction. One of the iron doors of lantern had been thrown down, and was found by me near the house in a broken state, and put inside of house, and one of the lamps carried away, although I found track of it. This lamp is now in a house near the harbour. Otherwise the [light] house is in a good condition, indeed it has stood the storms extremely well.

With the terms of the sale being violated, the government repossessed the harbour on July 25, 1856 and subsequently made some minor repairs. The following spring, two men out fishing sought shelter in the lighthouse from the weather. After making a fire on the floor, they fell asleep and awoke to find the tower engulfed in flames. The men made a speedy exit, and it didnt take long for the lighthouse to burn to the waters edge.

Upkeep of the harbour was abandoned until January 1871, when a contract was awarded for constructing two piers and deepening the basin to create a harbour of refuge. Over the next four years, two parallel piers, 738 feet in length and spaced 250 feet apart, were put in place, and the entrance and ten acres in the harbour were dredged to a depth of fifteen feet.

In 1876, two lighthouses were erected on the east pier at Rondeau and placed in operation on September 7. The Department of Marine published the following description of these lights in its annual report:

Thomas Harrison was hired as keeper of the range lights at an annual salary of $400. On October 19, 1876, just over a month into his service, the lamps and reflectors in the main light were destroyed by an accidental fire, taking the light of commission for the rest of the season. In 1878, six lamps and twenty-two-inch reflectors were being used in the rear light, with a single mammoth flat-wick lamp and a seventeen-inch reflector in the front light.

In 1891, the Department of Marine decided to make the inner range light the main light and higher of the two pier lights. To accomplish this, the shorter tower was moved from the inner end to the outer end of the pier, and an octagonal tower was built at the inner end of the pier. This new lighthouse stood upon a steel-faced cylindrical base and used the lantern room and illuminating apparatus from the old main light to produce a flashing red and white light at an elevation of seventy feet above the lake.

A new front range light, in the form of an square, skeletal, steel tower with sloping sides and surmounted by a square iron lantern, was erected in 1905. This tower, supplied by Gould, Shapley & Muir of Brantford for $356, was painted red and stood thirty-six feet tall.

In 1912, a reinforced concrete beacon, square in plan and surmounted by a pyramidal metal frame supporting a lantern at height of twenty-nine feet, was built on the outer end of the west pier. On July 4, 1919, the range lights on the east pier were automated, but a keeper was retained to sound a hand-operated fog horn and care for the west pier light.

An air diaphone fog signal, with its horn pointing southward, was established in the concrete beacon at the outer end of the western breakwater pier in 1927. Operated by electricity, the signal sounded a group of three blasts each minute when needed.

In 1947, the octagonal tower that served as the rear light on the east pier was decommissioned, and a skeletal tower was placed on the inner end of the west pier to form a range with the concrete tower on the western pierhead. The two-storey keepers dwelling situated near the east pier was sold to Jim Goodhue, and the structure was loaded on a floating drydock and towed across the bay by the Goodhue fishing tug to its new home among a collection of cottages.

For a larger map of Rondeau West Breakwater Range Lighthouse, click the lighthouse in the above map.

From Highway 3 between Cedar Springs and Blenheim, turn southeast on Erieau Road and drive for 8 km (5 miles). At this point, the road will become Ross Lane. After 0.8 km (0.5 miles), turn right onto Mariners Road and follow it through the town of Erieau to its end where you can park and walk the west breakwater. Note that after 1.1 km (0.7 miles) on Mariners Road, you will need to turn right onto Nichols Road and then take your first left to stay on Mariners Road.

The lights are owned by the Canadian Coast Guard. Grounds open, towers closed.