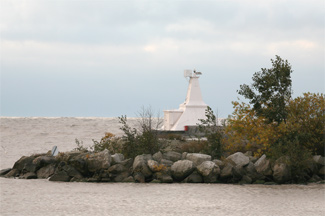 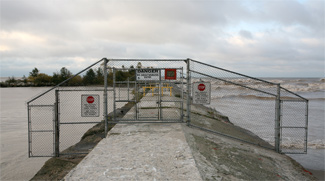 In 1923, a small, triangular traffic island at the junction of Bridge, Main, Jefferson, and Colborne Streets in Port Stanley was named a National Historic Site, and the following year a plaque and cairn were erected there to honour the significant explorers and travelers associated with Port Stanley. During the first descent of Lake Erie by Europeans, Adrien Jolliet landed at the mouth of Port Stanleys Kettle Creek in 1669, and in the War of 1812, General Isaac Brock encamped on the beach there en route to Fort Detroit.

The settlement of Kettle Creek was founded in 1812, but during the next decade its name was changed to Port Stanley to honour Edward Smith-Stanley, fourteenth earl of Derby, who had visited nearby Port Talbot. In January 1837, a committee of the House of Assembly of Upper Canada recommended that funds be granted for lighthouses on Lake Erie at Port Stanley, Port Burwell, and the Cut at Long Point. The first Port Stanley Lighthouse must have been erected shortly after this as it was improved during harbour improvements carried out there in 1843 and 1844.

As the old works of this Harbour, which is about midway up Lake Erie, with a very extensive, old settled back country, were in ruin and unavailable, and the little shipment that took place was consequently obliged to be made by means of small boats, going to the Vessels lying out in the Lake, at great risk; it is not to be wondered at that the Trade was almost annihilated. Ship-owners would not charter their Vessels to it, and the Passenger Trade, on the Canada side, was given up. The re-construction, therefore, of this Harbour, was of vital importance to that whole section of country, and the beneficial results of it are already apparent.

This Harbour is formed in the same manner that most of the other artificial Harbours on the Lakes generally are, unfortunately, but of necessity obliged to be constructed. Its position is at the mouth of a Creek, discharging into the Lake where the shore is not indented, and no shelter is afforded from any wind except that off land. The coast of the Lake above and below it, for a great distance, is a high clay bank, annually washing with the waters, which, of course, when agitated, carry with them in the direction of the prevailing wind much shingle and deposit. In their natural state the mouths of such Creeks are obstructed by Bars, varying in height and position almost weekly. Sometimes they are wholly stopped across, and remain so until a freshet in the stream forces a channel through the impediments.

The course universally adopted is to construct a Pier, on each side, and in the natural direction of the course of the Creek, the breadth between the Piers being proportioned (or should be so as much as possible) to the capacity of the stream, and its power to keep the space between the Piers scoured out. When these Piers are extended to a certain depth into the Lake the mouth is found, by experience hitherto, not to choke or be filled up; but the shingle makes rapidly on the windward side of the Piers, and of course it must eventually reach the entrance.

This description is applicable to almost every artificial Harbour on the Lakes. In reality they do not deserve the name of Harbours, being much more truly but landing Wharves. Still their construction is of necessity restored to, to meet the present wants of the country, the finances of which do not yet admit of the great expenditure, which the formation of Harbours, properly so called, and within reasonable distances of each other, would require.

While entering the harbour in a gale in 1861, a vessel struck and destroyed the lighthouse at Port Stanley, necessitating the erection of a small new structure to mark the harbour. This new light was likely a lantern containing four lamps and fourteen-inch reflectors that was being hoisted atop a frame by Keeper Charles Ead in 1876. Charles had a family of ten children and had been placed in charge of the light in 1869 upon the death of his father, who had served as keeper for a decade. In 1877, the Department of Marine assumed control of a privately maintained red pole light on the west pier at Port Stanley, and Keeper Eads annual salary was raised to $275 from $300 to compensate him for looking after two lights.

John Ellison of Port Stanley was contracted in 1881 to construct a new lighthouse for Port Stanley for $1,250. The following description of the light was published by the Department of Marine after its completion the following year:

A lighthouse at Port Stanley, Lake Erie, to serve as a coast light as well as to show the entrance to the port. It is situated on the outer end of the western breakwater pier, and is of the fixed white Catoptric class. It is elevated 42 feet above the level of the lake, and should be visible 11 miles from all points seaward. The tower is a square wooden one, painted white, 35 feet high from its base to the lantern vane, and stands upon a timber block 7 feet high, built 34 feet from the outer end of the breakwater pier.

In 1905, Haney and Miller were contracted to construct a new L-shaped breakwater at Port Stanley to shelter the harbours parallel piers. By this time, Port Stanley had become the Canadian terminus of a car ferry service across Lake Erie in connection with the Pere Marquette Railway, and the railway company had built a pier parallel to the harbours west pier.

F.R. Miller of Port Stanley was contracted to build a reinforced concrete tower to mark the outer end of the new L-shaped breakwater at a cost of $3,850, and this work was completed in 1909. A one-inch diaphone, operated by electricity, was installed at the breakwater lighthouse in 1913. During periods of low visibility, this fog alarm would sound a two-second blast every fifteen seconds.

In 2016, Port Stanley lighthouse was transferred to the Municipality of Central Elgin, and the municipality was awarded a one-time $65,000 grant to help fund the restoration and maintenance of the structure. Once we own it, we'll take steps to refurbish it, clean it up. I believe that its lead paint that's on there so we'll have to take special steps to clean that up, but that's the goal is to fix it up, said Central Elgin Mayor David Marr.

For a larger map of Port Stanley Lighthouse, click the lighthouse in the above map.

On the west side of the river (Kettle Creek) in downtown Port Stanley, turn south on William Street and continue to its end where you will find parking for the beach. The breakwater is not accessible, but a distant view of the light is possible. Another option is to travel to the east side of the river and then go south on Main Street to its end.