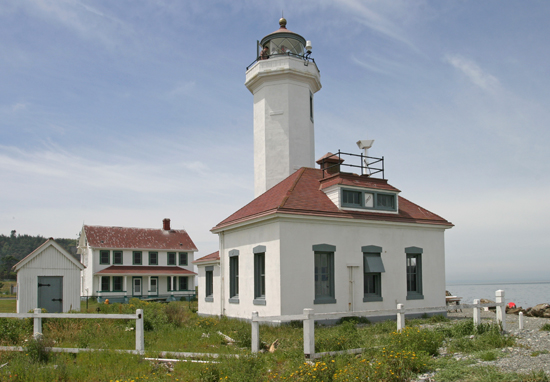 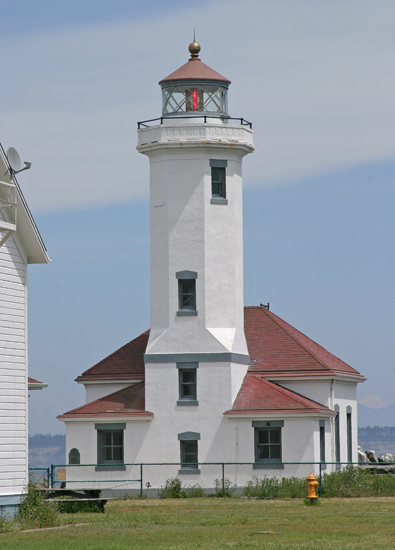 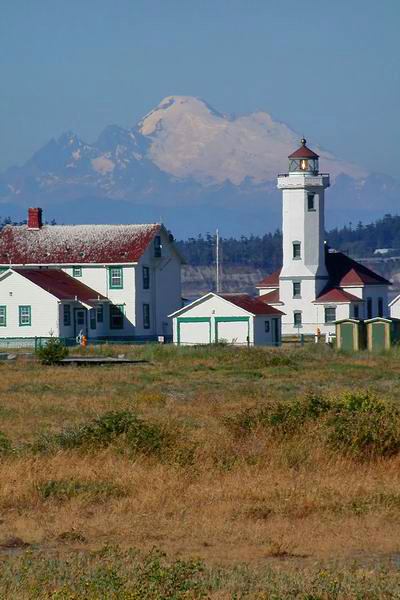 It was early in the morning on April 1, 1921 when Keeper William J. Thomas of Point Wilson Lighthouse heard a sickening grinding noise. He knew instantly there was trouble in the water and quickly telephoned Port Townsend to send help.

What Keeper Thomas heard was the slamming of the crowded passenger liner Governor of the Admiral Line into the freighter West Hartland. The 417-foot Governor had just offloaded passengers in Victoria and was bound for Seattle, when it rounded Port Townsend and was rammed by the freighter. Reports of the accident would later conclude that the pilot on the Governor mistook the West Hartlands running lights for the fixed lights on Marrowstone Point and failed to yield the right-of-way. A ten-foot gash was torn in the Governors iron hull, and even though the captain of the West Hartland ordered full speed ahead to try to keep the hole plugged, the Governor soon began to sink in 240 feet of water. In the time it took for the vessel to sink, most of the passengers were able to scamper aboard the West Hartland, and all but eight of the 240 people aboard the Governor were rescued.

Keeper Thomas, who was in the lighthouse at the time of the collision, provided the following account of the accident:

It was just 12:05 this morning when I heard the crash. As I turned in the direction of the sound, I saw the West Hartland with her nose rammed into the Governors starboard side amidships. It was clear and the vessels were plainly in sight about three quarters of a mile away.

I immediately called Port Townsend and tried to get the coast guard cutters, Arcata and Snohomish. Both were out of port. I finally got several launches out. I could see the boats putting out, and it wasnt more than an hour before the Governor sank.

Point Wilson, named by Captain George Vancouver in 1792 after his colleague Captain George Wilson, marks the western side of the entrance to Admiralty Inlet from the Strait of Juan de Fuca and is an important landmark for vessels traveling to and from Puget Sound. This critical turn was first marked by a church bell. Recognizing that the point was often shrouded by fog, in 1865, Captain J.W. Sheldon donated a ships bell to St. Pauls Episcopal Church in Port Townsend with the condition that the bell be rung on foggy days. Several years later, a steamer used the sound of the bell as a guide into Port Townsend harbor. John H. Yates was so touched after reading the newspaper account of the dual-role the bell played, that he wrote the hymn, The Harbor Bell.

Congress passed an act on June 20, 1878 appropriating $8,000 for establishing a light and fog signal at Point Wilson, but as this amount was insufficient for both aids, priority was placed on the fog signal. The fog signal machinery was built in Portland during the winter of 1878  1879, and on March 3, 1879, an additional $12,000 was allocated for the station. The fog signal building was built by hired labor under the direction of the district engineer, and a twelve-inch steam whistle housed therein was placed in operation on September 1, 1879, giving an eight-second blast every minute.

A $923 contract to manufacture the lantern room for the lighthouse was awarded to Smith Brothers & Watson, the lowest bidders, on July 2, 1879, and a lens, formerly used at Point Bonita, California, was sent northward to be installed at the station. Plans for the lighthouse were approved on August 12, and the district engineer supervised its construction over the next four months. C.W. Holt and a crew of eighteen men commenced construction of the lighthouse on September 2, 1879.

The lighthouse consisted of a twelve-foot-square frame tower rising to a height of forty-six-foot from the pitched roof of a two-story keepers dwelling. The tower first exhibited its fixed white light, which could be seen for up to thirteen miles, on December 15, 1879, and mariners were unanimous in expressions of commendation of the excellence of the light and of the efficiency of the fog-signal.

David M. Littlefield, a Civil War veteran and local resident, was appointed the first keeper at Point Wilson and was paid an annual salary of $800. Littlefield served as keeper for four years before moving back to Port Townsend, where he would later serve as a City Councilman, Mayor, and Collector of Customs.

In 1894, a galvanized-iron oil house was built on the station grounds, and a new lens was installed in the lantern room, changing the lights characteristic from fixed white to fixed white varied by a red flash every twenty seconds.

Water to operate the stations steam whistle was captured from cement water sheds and stored in a brick cistern. One would think that there would always be ample rainfall in Washington, but Port Townsend lies in a rain shadow caused by the Olympic Mountains and sees little rainfall during the summer months. This proved to be an issue on September 29, 1896, when the steamer Umatilla left Victoria, British Columbia just after midnight, bound for Puget Sound in a dense fog. The fog signal at Point Wilson was inoperable due to a lack of water, and the steamship was forced to navigate by sounding its whistle at regular intervals and listening for echoes to judge its proximity to land.

The 310-foot-long Umatilla struck rocks about a mile west of Point Wilson, but Captain J.C. Hunter was able to quickly free his vessel and decided to try to reach Port Townsend. The impact punctured the Umatillas hull, and as the crew had failed to close the doors sealing off the ships five hull compartments, water quickly flooded in, quenching the engines fires. Realizing the danger he was in, Captain Hunter wisely ran the Umatilla aground a few hundred yards from Point Wilson Lighthouse and lowered the bow anchors to hold the ship in place. All passengers were safely offloaded, but the ship and cargo suffered roughly $100,000 in damages. Though Point Wilsons fog signal wasnt sounding, Captain Hunter and his pilot were censured for overconfidence.

High tides and stormy weather occasionally took their toll on the sandy beach on which the tower was built. In 1886, a picket fence, 5 feet high and 440 feet long, was built across the low part of the spit to catch drifting sound and build up the area where a breach seemed likely. By 1904, much of the beach had eroded, threatening the integrity of the lighthouse. The problem was temporarily fixed by 1,542 tons of stone reinforcement piled on the eastern and northern sides of the reservation.

The current lighthouse was completed in 1914, but the original lighthouse, minus its tower, continued to serve as a residence for the keepers. The new lighthouse features a forty-nine-foot concrete tower, built in an octagonal shape to reduce wind pressure, which projects upward from a fog signal building. The light still shines from the fourth-order Fresnel lens, sending forth alternate red and white flashes every five seconds.

In 1917, the Secretary of Commerce urged lighthouse keepers to cultivate as much land as possible at their stations in anticipation of food shortages during World War I. Keeper William Thomas willingly complied and that fall sent the following letter to the lighthouse inspector.

Sir: Have sent you to-day per parcel post a sample of some of the vegetables I raised on the station here. Peas, potatoes, carrots, lettuce, garlic, and squash do well, but tomatoes, cabbage, and turnips are a failure; beans fairly well after planting four times; have 4 gallons of beans salted and 2 gallons canned. The yield was good, but of course of small quantity, as space was limited. Early onions and lettuce were splendid; gave Heather (the lighthouse tender) some for their mess.

Keeper Thomas was commended by the department for the energy and zeal he showed in obtaining such fine results, and a photograph showing a potato, parsnip, carrot, and a bulb of garlic that he grew in the stations sandy soil is preserved in the National Archives.

Like those at Point Bonita and Point Loma, the light at Point Wilson was extinguished during World War II as a defense measure to protect nearby Fort Worden and the entrance to Puget Sound.

Today, a computer, located at the Coast Guard Air Station at Port Angeles, monitors the light, which was automated in 1976. The keepers quarters were occupied by Coast Guard personnel until 2000. During the winters of 2005 and 2006, high winds and waves pummeled the low-lying lighthouse property flooding the basement of the keepers dwelling and ripping the fog horn from its sound-wall. The State of Washington has considered purchasing the property from the Coast Guard and combining it with nearby Fort Worden State Park, however, in 2007 the scheduled review of this proposal was delayed. Moving the lighthouse and associated buildings, which will likely cost between $3 and $5 million dollars, is considered the only long-term solution for saving the station. In the meantime, the Coast Guard is filling in the holes that have developed in the wall of rock armor built around the point.

During the summer of 2011, divers with the Marine Documentation Society visited the wreck of the Governor and discovered the ships bell, buried in silt. Because the divers didnt have an expert with them to authenticate the bell, it was left with the wreckage. The owners of the salvage rights for the wreck are considering what to do with the bell once it is recovered. Placing it on exhibit at the lighthouse wouldnt be a bad option.

In 2019, the Coast Guard leased Point Wilson Lighthouse to the U.S. Lighthouse Society, which already operates the nearby Point No Point Lighthouse and New Dungeness Lighthouse. In 2020, the society started offering overnight stays at a restored Coast Guard dwelling location on the lighthouse grounds.

For a larger map of Point Wilson Lighthouse, click the lighthouse in the above map.

From Highway 20 in Port Townsend, turn left on Kearney Street and when it ends turn right onto Blaine Street. From Blaine Street, turn left onto Walker Street, which will become Cherry Street. Follow Cherry Street 1.6 miles to Fort Worden where the road changes to Fort Worden Way. Enter Fort Worden and turn right on Eisenhower Avenue. When Eisenhower Avenue ends, turn left on Harbor Defense Way and follow it 0.8 miles to Point Wilson Lighthouse. In 2019, the Coast Guard leased Point Wilson Lighthouse to the U.S. Lighthouse Society, which plans to open the lighthouse to the public.

The lighthouse and tower were formerly open to the public but currently are not. In 2020, the U.S. Lighthouse Society started offering overnight stays at a restored Coast Guard dwelling on the lighthouse grounds.

The lighthouse is owned by the Coast Guard but leased to the U.S. Lighthouse Society. Grounds open, lighthouse closed.


As you pass through Fort Worden on your way to the lighthouse, the surroundings might seem a bit familiar as they were used in the filming of "An Officer and a Gentleman." In the movie, Fort Worden was known as Fort Ranier. Point Wilson Lighthouse also makes an appearance in the film.