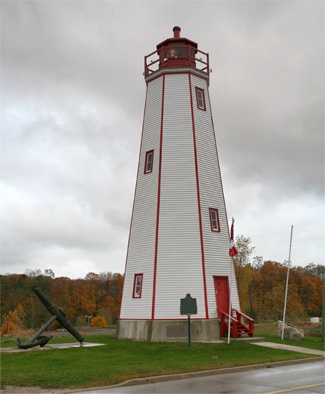 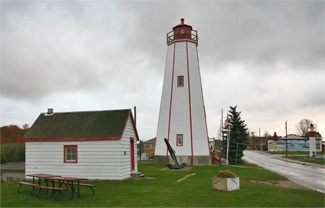 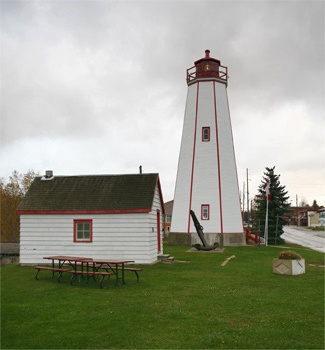 Situated midway between the Detroit River and Niagara Falls, Port Burwell is known as the Jewel of Eries North Shore and is home to a historic lighthouse and marine museum, a wind interpretive centre, and the HMS Ojibwa, a cold-war-era submarine. Port Burwell is named after Mahlon Bruwell, a surveyor for Thomas Talbot, who laid out the village in 1830. To ensure his namesake village would prosper, Burwell deeded two-and-a-half hectares of land to the Port Burwell Harbour Company, which was charged with developing the mouth of Big Otter Creek into a navigable harbour for the export of lumber and farm products.

In 1837, the committee of the House of Assembly for the Province of Upper Canada recommended that money be provided for lighthouses on Lake Erie at Port Burwell, Port Colborne, Port Stanley, and the Cut at Long Point, and £500 was granted that year for a lighthouse at Port Burwell. Isaac Draper and James Hutchinson were appointed commissioners to facilitate construction of Port Burwell Lighthouse, and Alexander Saxon completed the wooden tower in 1840.

Alexander Sutherland, Jr. was appointed keeper of Port Burwell Lighthouse on May 7, 1874 in room of his father, who passed away the previous month. After the superintendent of the lights above Montreal visited Port Burwell in 1876, he provided the following description of the lighthouse:

There are three base-burner fountain lamps, and three 15-inch reflectors on an iron frame. The lantern is made of wood, has a wooden floor covered with zinc, and is five feet nine inches in diameter. The glass is 30 x 36 inches. The lighthouse is a white octagonal wooden building, 45 feet high. The place is very well kept indeed.

Though the tower was just forty-five feet tall, it had a focal plane of ninety feet above Lake Erie thanks to the lofty bluff on which it stands.

In 1910, a fourth-order lens illuminated by petroleum vapour burned under and incandescent mantle replaced the array of three lamps and reflectors in the towers lantern room.

The Department of Public Works extended the breakwater piers at the entrance to the harbour at Port Burwell in 1899, and the Pennsylvania-Ontario Transportation, which operated a railroad car ferry between Ashtabula, Ohio and Port Burwell, established a pair of range lights on the east pier in 1906 to mark the harbour. In 1910, the Department of Marine assumed responsibility for these range lights, which were fixed white and shown from reflector lanterns mounted atop wooden frameworks.

On June 15, 1914, an unwatched dioptric light was established at the outer end of the west breakwater at Port Burwell atop a square, pyramidal, concrete structure that was surmounted by a pyramidal metal frame that supported a lantern. Lights similar to this were also placed on the breakwaters at Port Stanley and Rondeau.

A small diaphone fog alarm operated by a gas engine commenced operation on the east pier at Port Burwell on November 1, 1917 to help guide the railroad car ferry into the harbour during the long nights and stormy weather of winter. Located 530 feet from the end of the pier, the fog alarm sounded a triple blast every minute and replaced a fog bell that had formerly been used. In 1930, the diaphone was discontinued, and a new remote-controlled, electric fog alarm was established near the pyramidal concrete tower on the west pierhead. At this time, a new light was also established at the end of a rocky extension to the west breakwater.

The Village of Port Burwell acquired its historic wooden lighthouse in 1965, and in 1986 Mennonite craftsmen refurbished the tower using hand tools and methods similar to those used in the original work.

Barbara Sutherland Kechnie spoke at the ceremonial relighting of the restored lighthouse on June 20, 1987 and shared the following stories regarding her ancestors that kept the light:

Grandpa [John] Sutherland was lightkeeper for the longest period, being 45 years, and his long service was rewarded by the honour of receiving a King George medal for long service. I remember the occasion very well. It was held in the west park on the hill, known as Iroquois Park. The most memorable part of the ceremony to me at the time, was Grandpa Sutherland rounding up all the grandchildren there, the Fanjoy boys, Uncle Dons boys and Betty, Jack and I, to offer us each a nickel if wed stand at the back of the crowd and yell Thats our Pop! as he stepped forward to receive his medal. Needless to say we all willingly earned our nickel.

In closing, may I say that, yes, we lighthouse Sutherlands, are proud of our roots and never forget our heritage in Port Burwell. Any childhood friends know how as children, we watched for any sign of fog or a large ship coming in. We would hightail it for home to alert our Dad. He usually beat us to it, for as we panted up the beach hill, wed hear the bawling of the fog-horn, locally known as Sutherlands calf.

Located alongside Robinson Street on a hill overlooking the harbor at Port Burwell.
Latitude: 42.64373, Longitude: -80.80685

For a larger map of Port Burwell Lighthouse, click the lighthouse in the above map.

In Port Burwell, follow Robinson Street along the east side of the river south towards Lake Erie, and you will find Port Burwell Lighthouse across the street from Port Burwell Marine Museum. For more information on the lighthouse and museum, call (519) 874-4807.

The lighthouse is owned by the Municipality of Bayham. Grounds open, tower open in season.