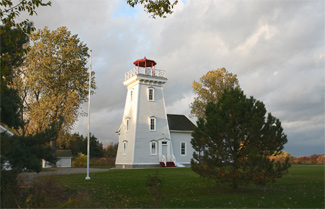 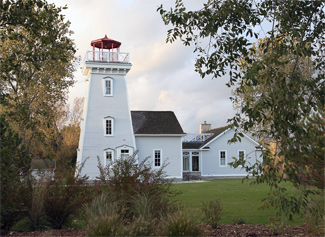 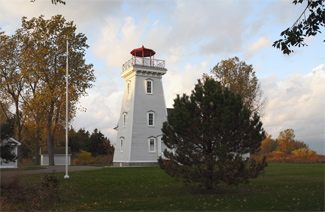 Extending nearly forty kilometres into Lake Erie, Long Point is a sand spit that presents a dangerous obstacle for mariners but also creates Long Point Bay, a protected anchorage on its northern side. A stone lighthouse commenced operation on the tip of Long Point in 1830 to help guide mariners around the hazard, but shortly thereafter a civil engineer was sent to investigate the feasibility of excavating a canal across the base of Long Point to provide a shortcut for mariners sailing along the northern shore of Lake Erie.

Nature stepped in in late 1833 and formed its own cut across the base of the sand spit, and the committee established to construct a canal across Long Point now just had to build piers to maintain the opening. A lightship was stationed at Long Point Cut in 1844 to help mariners that for the past decade had been using the passage to avoid making the great circuit of Long Point.

The condition of the cut was noted in the annual report of the Chairman of the Board of Works for the Province of Canada in 1846:

The Western point of the beach has made considerably to the eastward during the last eighteen months, so much so as to have rendered the alteration of the position of the light-vessel necessary; yet, under all the existing disadvantages, this place is one of very great importance as an asylum, not less than twenty-six vessels having been in it at one time last autumn through stress of weather. Were the breadth of this channel once fixed, and means adopted for preventing the silt from along shore being carried into it, there can be no doubt, that, with very little assistance by dredging, a direct channel with a sufficient depth of water could be established, and kept open through it by natural forces

Measures taken to keep the channel open were not sufficient, and when the cut filled up, the lightship was transferred to Lake St. Francis in 1857 and mariners were once again forced to round Long Point or portage their vessels across the sand spit as First Nation and others had done before.

After a storm in 1865 opened up an even deeper channel across Long Point, Parliament appropriated funds in 1878 for a lighthouse to mark it. The following description of the lighthouse was published by the Department of Marine in 1879:

During the past season a new Lighthouse has been erected on the east side of the new channel at the west end of Long Point, Lake Erie, in the County of Norfolk, and the Light put in operation on the 15th October. The Light is a revolving red catoptric, and attains its greatest brilliancy every minute. It is elevated 52 feet above high water mark, and in clear weather should be seen 12 miles. The building is of wood, painted white, and consists of a square tower 56 feet high, with dwelling attached.

Roderick Cameron built the lighthouse for $2,077, while E. Chanteloup provided the lantern room, lighting apparatus, and stand for $1,951.88. William E. Dickinson was hired as the lights first keeper at an annual salary of $400.

On a bitterly cold morning in December 1884, Keeper Dickinson was gazing out at Lake Erie from the comfort of the lighthouse when he spotted a black object bobbing in the water. After the mysterious flotsam washed up on the icebound shore, Dickinson hurried out and discovered it was a body, wrapped in rope and with its hands tied. Figuring the corpse was a sailor who had been given a watery grave, the keeper crafted a rough box and buried the remains on Long Point. A brief account in a newspaper announced the discovery of the body, and the following March, John Piggott, accompanied by detective John Murray, visited Long Point and exhumed the body to see if it was Marshall Piggott, Johns missing brother.

Marshall Piggott was last seen on November 17, 1884, and the following day, Havelock Smith visited Marshalls mother wanting her to make good on a $1,300 note that Marshall had recently given him. After John Piggott, and later his mother, identified the remains as being Marshall Piggott, Murray was able to deduce that Smith had murdered Marshall and thrown his weighted-down body into Lake Erie, before trying to extort money from Marshalls mother with a forged note. The case was tried twice, but both times the jury was unable to reach a unanimous verdict and Smith went free.

The Canadian government announced that Long Point Cut Lighthouse would be discontinued at the close of navigation in 1916, as the cut had filled up several years earlier, but it then reconsidered its decision, and the light remained in operation until 1919, with Mrs. C.E. Mason serving as its final keeper.

No longer needed as a navigational aid, the lighthouse was first sold to a Mr. Hancock. This sale irked the Long Point Company, which had purchased much of Long Point in 1866 from the government to make a private hunting and had then had part of this land expropriated in 1879 to build the lighthouse.

Over the next several years, the lighthouse was significantly altered, with a verandah being built around three sides of the structure and a square lookout room replacing the original iron polygonal lantern.

In December 1998, Peter and Brigitte Westaway purchased the lighthouse from the widow of the propertys second owner, who had used it as a hunting cottage. The Westaways hired Carlos Ventin, a noted Canadian restoration architect, to draw up plans for restoring the lighthouse to its original appearance and adding some extra living space that would complement the historic building.

Starting in the spring of 1999, contractors removed the wrap-around verandah and siding that consisted of two layers of asphalt shingles, a layer of clapboards, and a layer of cedar shakes, as the first step in returning the lighthouse to its original profile. The painstaking restoration, which saw the first floor be converted into a living room, guest bedroom, and bath, and the second floor into a master bedroom and bath, was recognized as the Most Outstanding Historical Restoration in Ontario for that year. A modern kitchen and screened-in porch are linked to the lighthouse by a breezeway.

For a larger map of Long Point Cut Lighthouse, click the lighthouse in the above map.