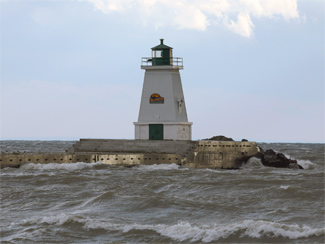 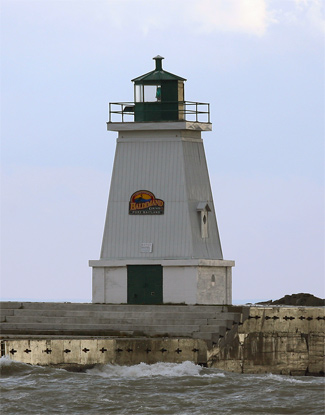 Named after Sir Peregrine Maitland, who served as the Lieutenant Governor of Upper Canada from 1818 to 1828, Port Maitland straddles the mouth of the Grand River, where it empties into the northern shore of Lake Erie. In 1815, the Royal Navy commenced construction of the Grand River Naval Depot on the present site of Port Maitland. Though designed to accommodate three frigates and 1,000 men in the event of war, the depot only served as a base for the four schooners that made up the British naval force on Lake Erie and a few small detachments of men, as the Rush-Bagot agreement, ratified following the War of 1812, limited future naval armament on the Great Lakes. The first improvements to the entrance to the Grand River were made as part of the development of the Grand River Naval Depot, and just as the era of the depot was ending, a feeder canal was dug from the Grand River to provide water for the Welland Canal, which opened in 1829. In 1842, work started on a lock at Port Maitland that allowed the feeder canal to serve as a shipping channel. In fact, while the portion of the Welland Canal near Port Colborne was being renovated between 1845 and 1850, the feeder canal served as the main link between Lake Erie and Lake Ontario.

Given the enhanced role the mouth of the Grand River now played, a light was first exhibited at its entrance in 1846. This lighthouse served until 1870, when its demise was reported in the Annual Report of the Department of Marine for that year:

The lighthouse at Port Maitland in Lake Erie, was reported some time ago by the officers of the Department, to be much decayed, and in need of extensive repairs, and directions were given to have it shored up, to make it safe, until the repairs could be properly carried out. Tenders were invited by public notice, to repair it, but none were within the limit of the amount voted by Parliament, and the execution of the work had accordingly to be deferred until an additional vote can be obtained. The pier on which the lighthouse was built was very much decayed, and before doing anything towards replacing the old lighthouse, extensive repairs will have to be made on the piers. On the 19th December, during a heavy gale of wind, the old lighthouse was blown down, rendering it quite useless, and a new one must be built as soon as Parliament votes the necessary funds. No inconvenience resulted to the shipping on the lake on account of this accident, as the navigation had closed for the season. The old lighthouse was built and lighted up for the first time in the year 1848, and has therefore been in operation nearly 23 years.

A replacement lighthouse was completed in 1871 at a cost of $5,194.50, and a dwelling, costing $300, was finally provided for the keeper in 1873. The new lighthouse had a much shorter life than its predecessor as it was destroyed by fire on April 30, 1875, but during its brief service, the schooner Augustus Ford was lost nearby.

The Augustus Ford left Detroit on November 21, 1874 bound for Oswego, New York on Lake Ontario with a cargo of wheat. When roughly midway down Lake Erie, the vessel was caught in a terrible storm. Captain J.C. Pease decided to seek shelter behind Long Point, but ran too far east and decided instead to try to make Port Maitland. It was about 6 p.m. on the twenty-third, when Captain Pease thought he caught a faint glimmer of light and headed to shore, thinking it was Port Maitland Lighthouse. When Pease realized the light was not the lighthouse, it was too late, and the August Ford was driven ashore roughly 400 metres east of the piers.

The sea swept over the vessel, filling its cabin and forcing the six people aboard to seek shelter above deck. Captain Pease, two crewmen, and Lizzie Sullivan, the cook, got atop the cabin deck, while Daniel Bigelow sought shelter behind the mainmast and John Mack went aloft and wrapped himself in the foretopsail. The four atop the cabin deck were frozen to death during the night, and by morning were encased in a large piece of ice. Bigelow and Mack both survived the ordeal, and a week later, Bigelow appeared before a public notary in Oswego and made a sworn statement describing the ill-fated journey. According to Bigelow, [t]he stranding of the vessel was entirely caused from the fact that the light at Port Maitland was not lighted on the night of the 23rd instant.

One newspaper account from Oswego said that the keeper at Port Maitland, who would have been Fergus Scholfield according to government records, was a one legged man and did not dare to face the storm. If these are the facts, the paper continued, a terrible responsibility rests on the keeper and the authority which has kept him there at the peril of life and property on the lakes. The more likely reason for the light being out was reported by the Buffalo Commercial Advertiser : A portion of the lighthouse pier at Grand River had been carried away, rendering it impossible for those in charge to reach the lighthouse. John Mack, one of the two survivors, was later quoted as saying that it was too bad that the keeper at Port Maitland hadnt had his head shot away instead of his leg during the Fenian raid at Ridgeway.

Due to serious injuries caused by ice and violent storms, the Department of Marine determined that a new pier was needed before a new lighthouse could be built to replace the one that burned down in April 1875. Messrs. Haney and Parry, the contractors working on the pier at Port Maitland for the Department of Public Works, were contracted to construct both the lighthouse and the pier upon which it would stand. The new light, which cost $5,826.88, went into service on October 1, 1875, and the superintendent of lights above Montreal provided the following description of the lighthouse in 1876:

This is a fixed white catoptric, having four mammoth flat-wick lamps on cast-iron stands, and four 20-inch reflectors on an iron table running around the lantern. The lantern is made of iron, has an iron floor, and measures seven feet across. The glass in lantern is 36 inches square. The lighthouse is a strong frame building, well bolted together, with a small room under the lantern closed in, and the rest open work. The lantern is 31 feet high from the pier. It is very well kept.

In October 1886, a power storm ripped away the elevated walkway atop the west pier along with much of the piers covering, which allowed large quantities of the ballast stone to spill into the water. The Department of Railways and Canals, which was repairing the pier at Port Maitland, was contracted in 1888 to rebuild the elevated walkway, so the keeper could access the light in foul weather, and to repair the keepers dwelling and oil store.

Keeper Scholfield was walking out to the pierhead lighthouse early on the morning of October 19, 1896, when he found an eight-pound pike flopping about on the pier. During the night, a storm had washed the sizable fish out of the lake, and it was unable to make its way back to into the water.

After serving thirty-six years, Keeper Scholfield was presented the Imperial Long Service Medal that had been awarded him by His Majesty King Edward. In his acceptance speech, Scholfield mentioned that when he left home at the age of fourteen to earn his own living, his father gave him the following advice that he never forgot: Be honourable, do what is right, and you will always find friends. There were times when making his way out to the lighthouse at the end of the 1,475-foot-long pier was no laughing matter, with the wind blowing eighty miles an hour and he having just one leg, but he always tried to be faithful to his duty.

In 1911, a fourth-order lens with a single lamp that burned petroleum vapour under an incandescent mantle took the place of the array of lamps and reflectors formerly used in the lantern room.

Various fog signals were employed at Port Maitland over the years. The keeper was supplied a hand-operated foghorn in 1910, and this was used until an electrically operated Faraday fog bell was placed on the outer end of the west pier in November 1916. This bell was used for just a short time, as a diaphone fog alarm, housed in a rectangular wooden building at the inner end of the west pier, commenced operation at the opening of navigation in 1917. The fog alarm was upgraded to a three-inch diaphone in 1921, and in 1927, the bottom portion of the pierhead lighthouse was enclosed to a house a fog signal.

At the opening of navigation in 1921, a rear range light was shown at a height of seventy-five feet from a square steel skeletal tower situated at the angle of the west pier, about 300 yards from the pierhead lighthouse, which served as the front range light. This steel tower replaced a wooden one that had been in use since the range was established in 1916. The colour of the range lights was changed from white to green in 1954.

Perched atop a concrete base and encased in metal siding, Port Maitland Lighthouse is now privately maintained and continues to guide mariners into the Grand River with its flashing green light. Its companion rear range light was removed from the west pier in 2000, but a cylindrical tower marks the east pier. The upper portion of the range light was saved, but plans to place it in a local park have not been realized.

For a larger map of Port Maitland Lighthouse, click the lighthouse in the above map.