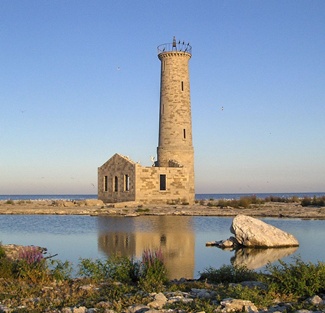 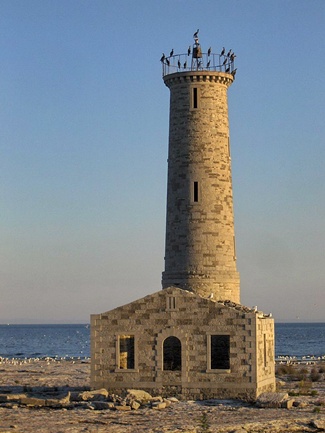 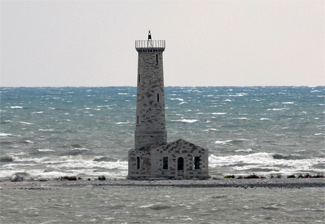 The first Welland Canal, which links Lake Ontario to Lake Erie, bypassing Niagara Falls, was constructed between 1824 and 1829. As part of this work, a feeder canal was run from a dam constructed on the Grand River at present-day Dunnville to provide water for the locks in the main canal. This feeder canal was soon expanded, allowing ships to travel to Dunnville, and then in 1842, it was linked to Lake Erie via a lock at Port Maitland. When the southern portion of the Welland Canal was being renovated between 1845 and 1850, the feeder canal became part of the main Lake Ontario-Lake Erie link and saw up to 575 vessels passing through it each year. Aware that Port Maitland was soon to become a critical port, the Board of Works for the Providence of Canada issued the following plea in 1844 for a lighthouse on Mohawk Island, which is located roughly five kilometres east of Port Maitland.

A first class Light on Mohawk Island is now indispensable, from its proximity to Port Maitland at the mouth of the Grand River, which, next spring, will be the outlet to the whole trade up the Welland Canal. It would also be of infinite advantage to vessels plying between Port Colborne, Port Maitland, &c., and Port Dover, or any of the Ports on that part of the Lake, as it may be said to lie in their direct course, and a very long and dangerous reef extends from the Island, upon which a vast deal of property has been lost. Such a Light, with the Pier Light at Port Maitland, would add greatly to the safety of navigating that part of the Lake.

A contract for the construction of Mohawk Island Lighthouse was awarded in 1846 to John Brown, a Scotsman who had worked on the stone locks for the Erie Barge Canal and Welland Canal. Construction of the lighthouse commenced in the spring of 1847, using limestone shipped from Browns quarry in Queenston to Port Maitland via the Welland Canal. The lighthouse was completed in 1847, but due to the late arrival of the lighting apparatus from England, its light could not be placed in operation until the spring of 1848.

After successful completion of the lighthouse on Mohawk Island, Brown was tasked in the 1850s with building what are now known as the six Imperial Towers on Lake Huron as well as a similar tower at Burlington on Lake Ontario.

Mohawk Island Lighthouse originally consisted of a sixty-foot-tall stone tower attached to a one-story dwelling that contained a kitchen, sitting room, a single bedroom, and a central hallway that led from the dwellings entrance to the tower. John Burgess, a farmer from Burgess Point, now Rock Point Provincial Park, was hired as the first keeper of the light at an annual salary of £65. The towers lighting apparatus was equipped with ten lamps, each set in a parabolic reflector, and was revolved by a clockwork mechanism that was powered by a weight suspended in the tower. Every few hours, Keeper Burgess would have to ascend the towers six flights of wooden stairs to wind up the weight and check on the light. One evening the revolving mechanism failed, forcing Keeper Burgess and his son to use a blanket to produce the lights proper flashing pattern.

Sperm oil was originally burned in the lighthouses lamps, but as the demand for the oil exceeded the annual catch, its price became prohibitive, and alternatives were sought. After experiments demonstrated that it had illuminating qualities that matched or exceeded that of sperm oil, coal oil was introduced at the more accessible lighthouses in Canada starting in 1860. The lamps at Mohawk Island were adapted to the use of coal oil in 1864.

At the opening of navigation in 1889, the characteristic of Mohawk Island Lighthouse was changed from a revolving white light every three minutes to a group flashing white light that showed three bright flashes with intervals of thirty seconds between their points of greatest brilliancy, followed by an eclipse of seventy-five seconds. The lights characteristic was changed once again in May 1918, when a double-flash, long-focus reflector was installed to produce the following repeated pattern: flash, six-second eclipse, flash, eighteen-second eclipse.

After having lived in Newfoundland and Nova Scotia, Richard Foster moved to Dunnville in 1915, and shortly thereafter, he enlisted in the 114th Haldimand Battalion and was went overseas to fight in the Great War. The position of lightkeeper was often awarded to veterans and so it was that Foster began his service on Mohawk Island in 1921 at the age of fifty.

An unwatched Aga light was installed at Mohawk Island in 1929 to be used during the winter months, which explains Keeper Fosters logbook entry made at 7:45 a.m. on December 14, 1932: summer light put out and winter light left burning. Keeper Foster typically remained on the island for one day after activating the winter light to ensure it was functioning properly, so he and his twenty-five-year-old son James likely closed up the station and set off in a small skiff for the mile-and-a-half trip to the mainland on December 15.

When the men handt made it home a few days after the steady winter light was seen burning in place of the stations flashing light, friends and family members onshore became concerned. Richard Foster, Jr. and Ovide Charette rowed over to the island and found that the keepers personal belongings were gone along with the stations boat. After returning to Dunnville, the men reported the missing keeper and his son to the Ontario Provincial Police. A search was launched to cover the area between Port Maitland and Port Colborne, but fifteen-foot piles of slush ice along the shore and ice floes in the lake hampered the effort. Despite the efforts of many, the father and son were not found until December 31, when their frozen bodies were discovered on the beach near Point Abino.

The following account of the discovery appeared in a newspaper a few days later:

With the marks on the shore indicating an heroic fight to reach help, only to fail when within hailing distance of a farmhouse and drop back on the sand, exhausted from his fight with the elements and hunger, the body of James Foster was discovered about 200 yards from the waters edge, about three miles east of Port Colborne late Saturday afternoon by a Buffalo lady who had spent the day looking after her cottage. The body was in a good state of preservation with only a slight tear in one trouser leg, and one rubber missing from his feet.

With the hope revived that the body of the father might be discovered, crowds gathered on the shore in an extensive search all day Saturday...Ovide Charette, a friend of the family, discovered the body lying in the water and close to the beach about 100 yards from where the body of the son had been found. ...

As there was no water in the lungs of either man, it is now quite certain that they had drifted down the lake 29 miles to where the bodies were found and that the boat went to pieces throwing them into the lake quite near the waters edge. The father may have perished in the boat before it broke up, but it is thought that James struggled to shore in his exhausted condition in a valiant attempt to get help only to fall exhausted after struggling 200 yards from the waters edge.

A second newspaper offered its version of the Jims final moments:

the boat hit ice close enough for Jim, in whom a final spark of life was still burning, to crawl slowly, painfully over the ice hummocks towards safety. He probably shouted feebly, trying to attract attention from a farmhouse faintly visible in the gathering dusk.

Frantically he fought to make the top of a sand bank, its sides showing the signs of the terrific struggle, only to collapse at last, and die, face down in the sand, with a happy Canadian home, with welcome and warmth, less than two minutes walk away.

Following this tragedy, Mohawk Island Lighthouse was converted to an unstaffed station, but a caretaker still had to make occasional visits to the island to care for the battery-operated light. Mohawk Island Light was active until 1969, when vandals landed on the island, scaled the tower, and smashed the beacon. A lighted buoy was established offshore to replace the lighthouse, and eight years later, the Department of Transport announced plans to demolish the abandoned lighthouse due to liability concerns. Commercial fishermen, boaters, and lakeshore residents protested the plan, citing the historic value of the lighthouse and its usefulness as a reference point in navigating the area.

With no human residents, Mohawk Island became an important nesting site for terns, ring-billed gulls, and herring gulls, and in 1977, Mohawk Island National Wildlife Area was created. Public access to the island is prohibited during nesting season, which runs from April 1 to July 31.

The Mohawk Lighthouse Preservation Association was formed in 1990 to restore and protect the endangered lighthouse, but it appears little visible progress has been made. This beacon, which was reportedly used at Mohawk Island Lighthouse, is on display at the Port Dover Harbour Museum.

For a larger map of Mohawk Island Lighthouse, click the lighthouse in the above map.

From Highway 3 (Broad Street) in Dunnville, turn south onto Taylor Road, which will shortly become North Shore Road. After 9.6 km (6 miles), turn south onto Pyle Road and continue to its end at the shoreline where you can get a good view of Mohawk Island Lighthouse.

Owner of lighthouse unknown. As the island is a bird sanctuary, it is closed from April 1st until August 1st.