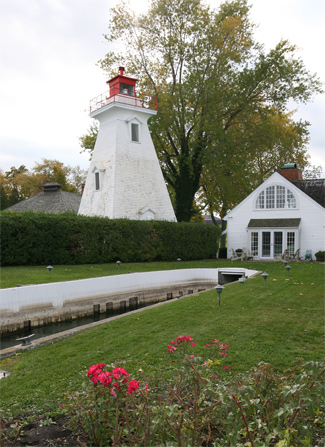 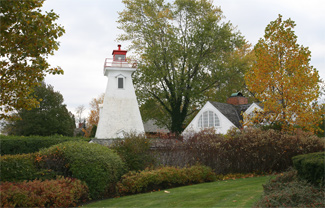 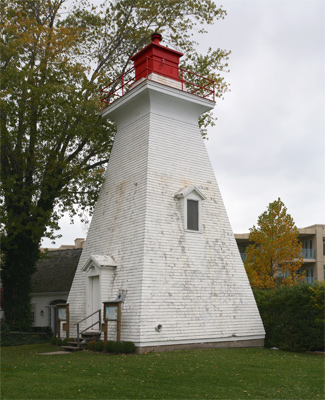 Niagara-on-the-Lake, as its names suggests, is situated at the confluence of Niagara River and Lake Ontario. The European settlement at this important junction was known from about 1781 as Butlersburg, in honour of John Butler, a loyalist who formed a regiment called Butlers Rangers to fight in the American Revolutionary War. John Simcoe, the first Lieutenant Governor of Upper Canada renamed the town Newark in 1792 and made it the capital of Upper Canada. It served this role until 1796, when Simcoe moved the capital to York (now Toronto). Newark was subsequently renamed Niagara, and then Niagara-on-the Lake. In 1804, a hexagonal stone lighthouse was constructed at Mississauga Point to mark the entrance to Niagara River from Lake Ontario. Known as Mississauga Point Lighthouse, this lighthouse was the first formal lighthouse built on the Great Lakes, but it had a short life as it was damaged in the Battle of Fort George in 1813 and then dismantled in 1814 to make room for Fort Mississauga. According to local legend, the remains of the lighthouse were incorporated into Fort Mississauga. Though no above-ground evidence of its existence remains, Mississauga Point Lighthouse was designated a national historic site of Canada in 1937, and a plaque acknowledging its significance as the first lighthouse on the Great Lakes, was affixed to the west gate of the fort.

Fort Mississauga is surrounded by Niagara-on-the-Lake Golf Course today, but public access to the historic site is possible by following a walking path that begins at the corner of Front and Simcoe streets.

On October 27, 1886, a fog bell formerly used at Gibraltar Point Lighthouse in Toronto Harbour was placed in operation on the north rampart of the ruins of Fort Mississauga. The bell was housed in a square, wooden structure with a pitched roof that was built by James Doritty for $198.50. In 1889, a bell buoy was anchored at the west side of the entrance to Niagara River, and the fog bell was discontinued and shipped to British Columbia for use at First Narrows Lighthouse.

The United States established the current Fort Niagara Lighthouse on the eastern side of the rivers entrance in 1872, and this light remained the primary light for entering the river until the Canadian government built a pair of range lights at Niagara-on-the-Lake in 1904. William P. Anderson, the Chief Engineer for the Department of Marine, published the following description of the new range lights:

Range lights established at the mouth of Niagara river were put in operation on October 10, 1904.

The front tower stands upon the Niagara Navigation Companys landing at Niagara-on-the-lake, 30 feet back from the edge of the wharf, and 16 feet from its extreme southeast end. It is a square wooden building, with sloping sides, painted white, surmounted by a square, iron lantern, painted red. It is 32 feet high from its base to the ventilator on the lantern.

The light is a fixed red catoptric light, elevated 30 feet above the level of the lake, and should be visible 7 miles in, and over a small arc on each side of, the line of range.

The light, which is also similar to the front light, is elevated 43 feet above the level of the lake, and should be visible 8 miles in, and over a small arc on each side of, the line of range.

The two lights in one, bearing S. 21 ½ ° E. lead into the river clear of all obstructions from the bell buoy on the outermost shoal at the entrance.

A diaphone, operated by compressed air, has also been installed as a fog alarm in a building erected for the purpose on the bank of the river, 930 feet westward of the front range tower, and will be put in operation on the opening of navigation in 1905.

The rectangular wooden fog alarm building was built atop a cribwork foundation in front of the turntable for the Michigan Central Railway. The trumpet for the diaphone fog alarm was elevated ten feet above the lake and gave a five-second blast every two minutes using air compressed by oil engines.

The range lights were greatly strengthened in 1917 through the installation of long focus reflectors, provided by the Dominion Lighthouse Depot at a cost of $2,063.39, which replaced fourth-order lenses previously in use. At this time, the lamps were burning petroleum vapour under a mantle, but the lights were electrified in 1923.

In 1975, Environment Canada opened a sampling site at Niagara-on-the-Lake to monitor the rivers water quality, and in 1988, they installed sampling equipment in the base of the rear range light. Submersible pumps located in a wet well beneath the nearby gazebo provide the lighthouse laboratory with bi-weekly samples from the river. The scope of the sampling program has expanded from measuring the level of nutrient inputs such as phosphorus to detecting the presence of toxic chemicals like PCBs. A similar site on Lake Erie allows for the effectiveness of clean-up efforts along the Niagara River to be determined.

For a larger map of Niagara River Range Rear Lighthouse, click the lighthouse in the above map.