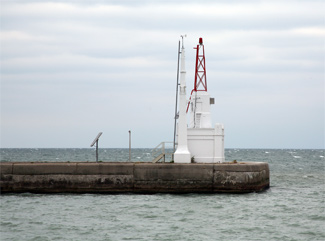 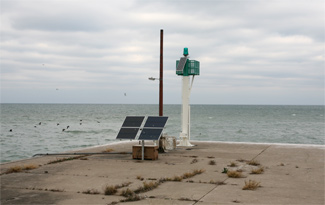 Four different incarnations of the Welland Canal have served to link Lake Ontario and Lake Erie, bypassing Niagara Falls. The first canal, which took advantage of as many existing waterways as possible, originally ran from Port Dalhousie on Lake Ontario south through Twelve Mile Creek and then connected to the Welland River, which empties into Niagara River above the falls. This canal opened to traffic in 1829, but it was soon improved by a southern extension to Port Colborne on Lake Erie that avoided the strong current of Niagara River. The second version of the Welland Canal, built between 1841 and 1848, followed the same route as the first one between Port Dalhousie and Port Colborne but used twenty-seven stone locks to cover the 100-metre difference in height between the two lakes instead of forty wooden ones. In addition, the depth of the canal was increased from eight feet to nine feet, and the length of the shortest lock went from 110 feet to 150 feet.

The third version of the canal was completed in 1887 and featured a shorter alignment between St. Catharines and Port Dalhousie. With this work, the number of locks was reduced by one, the length of the shortest lock was increased to 270 feet, and the canals depth was taken to fourteen feet.

The fourth and current version of the canal was built between 1913 and 1932 and saw a straightening of the northern portion of the canal with the northern terminus being moved from Port Dalhousie to Port Weller. In the present configuration, there are just eight locks, each of which is 766 feet long, and the depth is maintained at twenty-five feet.

To form an artificial harbour for the entrance to the canal at Port Weller, two pincer-shaped breakwaters were extended into Lake Ontario using material excavated during work on the fourth canal. In August 1921, a wooden pole was erected at the outer end of the west embankment at Port Weller, and on it were mounted a cluster of fixed white electric lights and an electrically-operated fog bell. A concrete mast replaced the wooden pole in 1925.

The pierhead light and bell served alone until 1931, when the fourth version of the Welland Canal was nearing completion and a combination keepers dwelling and generator building was built on the west bank of the canal at Port Weller along with a four-section, skeletal lighthouse. The following description of this work appeared in the Annual Report of the Lake Carriers Association for 1931:

A main light and fog signal established at the entrance to Welland Ship Canal is located on the west breakwater, 3,300 feet from its outer end. The structure is a steel skeleton tower surmounted by white square wooden watchroom and lantern, with white rectangular reinforced concrete dwelling and power house near base of tower. The light, elevation 95 feet, is flashing white electric, showing one flash every five seconds.

The fog signal is an electric horn established on the light pole on the outer end of the west breakwater, sounding a blast of 2 seconds duration every 10 seconds, thus: Blast 2 seconds, silent 8 seconds.

Consistent with the architecture of the time, the keepers dwelling was built in an Art Deco style. This building was declared a Recognized Federal Heritage Building in 1989 on account of its good Art Deco aesthetic and craftsmanship that include:

The first keeper of the Port Weller lights was William J. Gander, a veteran of the Great War who received the Colonial Auxiliary Forces Officers Decoration.

In 1934, an automatic radiobeacon was established at Port Weller as an additional aid for mariners, and in 1936, a seventh-order dioptric flashing green acetylene light was established on the outer end of the east embankment. Also in 1936, a sixth-order dioptric apparatus with an electric bulb replaced the cluster of lights exhibited from the top of the concrete mast at the end of the west embankment.

After having served in the Royal Canadian Air Force during the Second World War, Cyril Williamson was looking for secure employment to support his wife Ethel and their two sons. One evening in September 1945, Cy looked up from the evening paper and asked Ethel, How would you like to live in a lighthouse? A lighthouse? Why would I want to live in a lighthouse?, Ethel responded as she stopped her knitting and stared at him in amazement. You must be joking.

Cy wasnt joking, and after showing Ethel the ad for a lighthouse keeper, he explained that there would be a lot of competition for jobs now, and his experience with radios during the war would be a good fit for the position. Of the eight men who applied, Cy ranked first, and the family moved to the lighthouse in time to open it for the shipping season on April 1, 1946.

Cy and Ethel finished raising their two teenage sons at the lighthouse, and they both became licensed ham radio operators. Ethel was reportedly one of the first women in Canada to earn her license, and during her years at the lighthouse, she contacted people from over 250 countries. Following the war, many Canadian servicemen were still stationed overseas, and Ethel was often contacted to see if she could relay a message to their families.

Sometimes I wrote to the relatives making a date for them to come to the lighthouse at a certain time, Ethel noted. When this arrangement turned out satisfactory, and the wife or parents could come for the schedule, it was the most rewarding time of my life. Sometimes it was more than I could bear; hearing these conversations between loved ones, who were so many miles apart, I often felt like running from the room to hide my tears. I knew only too well the awful heartache of being separated from those we love.

When she wasnt talking on the radio or busy with her family, Ethel found time to knit over 1,500 wool hats that she donated to charity. Her years of service were recognized in 2002, when she was awarded a Queens Jubilee Medal. At the age of ninety-eight, she had the honour of christening the new Canadian Coast Guard vessel Cape Storm at the Port Weller Coast Guard Station, where she and Cy lived for twenty-five years. In 1972, Ethel published the book A Light on the Seaway, which chronicles her familys time taking care of the Port Weller Lights.

The present square concrete building topped by a metal tower that marks the western entrance to Port Weller was apparently erected in 1949, as it was that year that the focal plane of the light was raised from thirty-two to forty-five feet and a new fog signal was installed, producing two blasts a minute in this manner: three-second blast, nine seconds of silence, three-second blast, forty-fives seconds of silence. An L-shaped dwelling was built just south of the 1931 dwelling in 1953. The Wiliamsons moved into the new residence, and an assistant keeper was hired to live in the older one. Cy built a garage and breezeway between the two buildings, which was convenient as the watchroom was in the 1931 building and Cy had to thus travel between the two structures several times a day. The 1953 dwelling and the 1949 foghorn building were both declared Recognized Federal Heritage Buildings in 1989.

The Saint Lawrence Seaway Corporation established a set of range lights farther inland to safely guide mariners through the gap in the breakwater at Port Weller in 1969, and on June 23 of that year, Port Weller Main Lighthouse was discontinued. The tall skeletal tower remained standing for a year, and then a crane was brought in to lift the tower off its foundation and lay it on its side so it could be cut up and sold for scrap. When the crane tried to lift the tower after its hold-down bolts were cut, the crane and tower both toppled over in a terrifying crash. To expedite removal, the towers wooden portion was doused in petroleum and burned before the metal pieces were cut up with an acetylene torch.

Both the 1953 and 1931 residences now serve as the Port Weller Search and Rescue Station for the Canadian Coast Guard.

For a larger map of Port Weller Lighthouse, click the lighthouse in the above map.

From Port Dalhousie, go east on Lakeshore Road (Highway 87) for 4.3 km (2.7 miles) until you reach Welland Canal. On the east side of the canal, take your first possible left, and then stay left and follow the road that hugs the canal. After 1.9 km (1.2 miles), this road will end, but you can park and walk along a path/road the remaining 1.6 km (1 mile) to the end of the canal from where you can get a view across the canal of Port Weller Light.


I recommend reading Ethel Williamson's "A Light on the Seaway." Though Port Weller Lighthouse wasn't a traditional one, the Williamson's life at the station did resemble that of keepers and their families at the more stereotypical lighthouses. Ethel shares many humorous stories from their life on Welland Canal and chronicles the opening of St. Lawrence Seaway in 1959, when large "salties" began passing right outside their front door. Many people that Ethel befriended via radio paid a visit to the station, and the Williamsons called on some of their radio friends during trips to California and Europe.