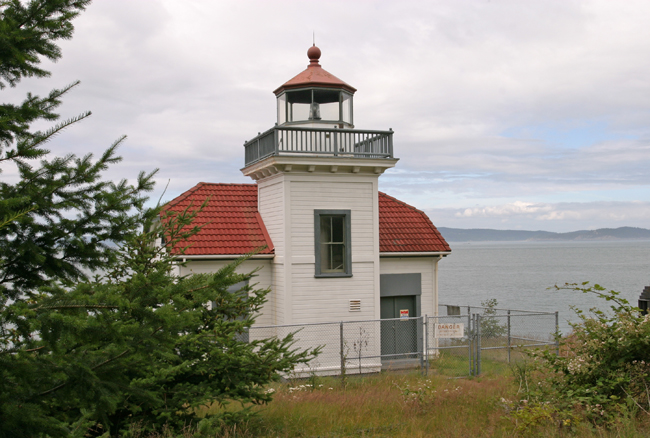 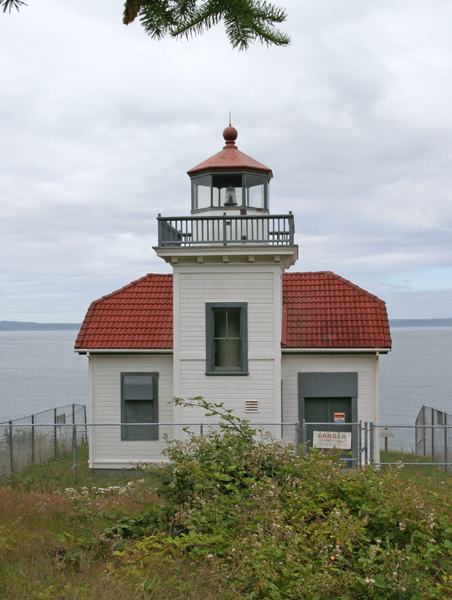 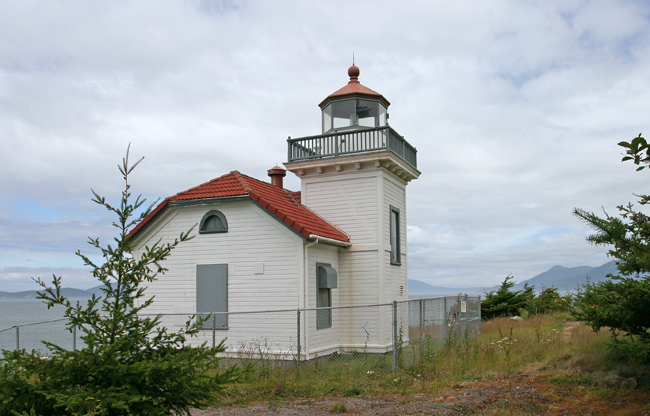 Vessels heading from Bellingham Bay south through Rosario Strait to the Strait of Juan de Fuca pass Burrows Island, where strong eddy lines and tide rips can be unpredictable. In 1897, the Lighthouse Board noted that traffic through Rosario Strait would be increasing and requested $15,000 for a light and fog signal on the southwest point of Burrows Island, which was a point of departure for vessels plying the strait.

The request was repeated annually until Congress finally appropriated the required sum on February 24, 1903. The desired site was obtained through condemnation on June 28, 1904 for $350, and bids for the work were opened on May 10, 1905.

The wood-framed lighthouse was built using a design by Carl W. Leick, who also designed the somewhat similar Mukilteo Lighthouse around the same time period. The lighthouse consists of a thirty-four-foot-tall, square tower attached to the eastern side of a fog signal building, which originally held a Daboll trumpet. Burrows Island Lighthouse went into operation on April 1, 1906, and its white light with a red sector, shone from a fourth-order Fresnel lens, helped warn of the dangers of nearby Dennis Shoal and Lawson Reef. The characteristic of the light was fixed white until May 1, 1927, when it was changed to a group of two flashes every fifteen seconds.

Unbelievably, during the first three months of operation the fog signal never had to be sounded. The next year it blew for 329 hours and consumed 215 gallons of oil. The Daboll trumpet would sound four-second blasts separated alternately by silence intervals of seven and twenty-five seconds.

Today, Burrows Island Lighthouse emits a white flash every six seconds at night, and mariners can activate the fog signal by keying their mic five times on channel 83A. The foghorn will then emit a group of two-second blasts every thirty seconds for thirty minutes.

The shoreline of Burrows Island is primarily sheer rock with sharp drop-offs, while steep hills covered with evergreens or grass make up most of the islands interior. The light station was built on one of the few level spots on the island. Originally, the station included the combination light tower and fog signal building, a keepers duplex, an oil house, a boathouse, and a derrick. A bungalow was built north of the duplex in 1952 to house the stations officer-in-charge. A power plant was eventually added to provide electricity for the station, and every eight months the buoy tender Fir delivered enough fuel to keep the generators running.

The light at the Burrows Island light house was put in place and entered commission on April 1st, and Captain J. B. Hermann, keeper, and his assistant, Mr. Edward Pfaff, speak highly of the contractor who put up the buildings and of the engineer-corps, who placed the engines, which are working perfectly. Captain Hermann is very much pleased with his location and it is safe to say that he will not be there long until that part of Burrows island will be a flower garden, for the captain loves the beautiful and along with his ability as a thorough light house man, he is no mean landscape gardener. Captain Hermann expects his family within two or three weeks.

Keeper Hermann was in charge of Burrows Island for just a few months before he left the lighthouse service. James had been a music teacher prior to becoming a lighthouse keeper, and the 1910 and 1920 census records show he returned to this profession and gave piano lessons in Anacortes. In 1934, a keeper at Burrows Island ordered a milk cow. The tug Klatawa, tasked with making the delivery, was towing the cow on a small raft, when she jumped off about a mile from the island. The cow floundered about in the water until a rope was thrown around her horns, allowing the tug to complete the journey with the cow cutting the water with her nose.

On election day in 1960, Nancy Johnson cast her ballot for John F. Kennedy, and then traveled to Burrows Island with her two infant daughters, Jennifer and JoJo, to join her husband Richard, who had already been serving as officer-in-charge of the station for one month. During the Johnsons three-year stay on the island, a third daughter, Jill, was born. When Nancy started having contractions, she was taken by boat to the hospital in Anacortes.

To prevent any of their children from accidentally falling into the water, the Johnsons installed locks on all of their doors and made sure that someone always had an eye on the children when they were outside. The family also had a dog named Johnsy that helped look after the children and together with other dogs at the station sounded alerts when visitors arrived or when boats offshore were in trouble.

One summer the family was watching Hawaii 5-0 on TV when they heard a commotion outside. There was all this jumping, splashing, squealing, and grunting, Nancy recalls, and the family rushed outside to see their first pod of Orcas playing in the kelp beds near the island. Another sound frequently heard on the island, the fog signal, wasnt quite so welcomed, as one of the Johnson daughters would cry continuously until it stopped going off.

Andrew (Andy) and DWanda Giles were stationed on Burrows Island from January 1966 until June 1968. Frank Showers was the officer-in-charge (OIC) when the Gileses arrived, and Seaman Andrew Goodwin and his wife Stephanie were also serving at the station. DWanda remembers the spectacular view from the front windows of their living quarters that often included Orca pods, ferries plying to and from Vancouver Island, and occasionally planes from Naval Air Station Whidbey Island conducting bombing practice on a cluster of rocks in the water straight out from the island. The planes looked like they were dropping bags of flour, and a loud WHOMP could be heard as the makeshift bombs hit their target.

The OIC occupied a keepers bungalow while the Gileses resided in the duplex. Each side of the duplex had a foyer, living room, dining room, pantry, kitchen, and an enormous laundry room, complete with double sinks and a folding table, on the main floor, with two bedrooms, a huge bath, and storage on the second floor. A full attic, accessed by a rope ladder, provided more storage, and the basement was finished with workbenches. The Coast Guard furnished the duplex, providing a washer and dryer, vacuum cleaner, and all the paper products and cleaning materials.

When DWanda Giles and Stephanie Goodwin were pregnant in 1967, all three of the coastguardsmen had to watch an instructional film on delivering a baby, but luckily this training did not have to be called upon. Andy Giles received notice on the stations radio when his first child, a daughter named Candace, was born, and then took thirty days of leave before bringing the infant back to the island. The men rotated shifts, and every third week received a weekend off. If the weather were good, they would often take one of the stations boats and go to town to pick up the mail and any needed supplies.

The enlisted families had to alternate laundry days, as the power drain was otherwise too much for the diesel generator. If the foghorn were in operation, laundry would have to wait, and even the ovens couldnt be used. After the first soundings of the foghorn, the regular blasts would soon become background noise, and the families had to focus to notice the signal was even operating.

Nancy Nock lived on Burrows Island for three years starting in June 1968. The week before she left, the station was connected to the power grid via a submarine cable. This change allowed unrestricted use of ovens and washing machines, and electric clocks were finally able to keep accurate time. When generators were being used, the electric clocks always ran fast or slow, so wind-up clocks were employed to keep time. The stations staff was reduced from three men to two in 1971, and the OIC moved into the duplex from his bungalow, which was torn down.

David J. Grotting was the stations OIC from 1969 until the Coast Guard left the island. Grotting oversaw the automation of the station, and his wife faithfully documented their time on the island. Her pictures show the keepers bungalow that their family lived in before it was demolished to make room for a helicopter landing pad, the oil house as it was being burned down in September 1971, a fence being built around the lighthouse, and a Coast Guard vessel calling at the station.

Burrows Island Lighthouse was automated in 1972, when the remaining Coast Guard personnel left the station. The boathouse and keepers dwelling were boarded up, and then in the early 1990s a modern optic replaced the Fresnel lens in the lantern room. A helicopter landing pad now stands where the keepers bungalow was located, and a Fresnel lens, reportedly used at Burrows Island, can now be found at the Coast Guard Station in Port Angeles. (The lens on display doesnt seem to match any of the historic characteristics for Burrows Island.)

Forty acres and 1,000 feet of shoreline around Burrows Island Lighthouse were conveyed to the Washington State Parks and Recreation Commission in 1978, and the state has since acquired most of the 486-acre to create Burrows Island State Park. A trail behind the lighthouse winds through groves of madronas to the top of the island, where the 650-foot climb is rewarded with a spectacular view of Rosario Strait.

On April 27, 2006 the availability of Burrows Island Light Station to an eligible entity was announced under the National Historic Lighthouse Preservation Act of 2000, and in response, five non-profits submitted applications. Secretary of the Interior Ken Salazar signed paperwork on June 23, 2010 to begin the transfer of Burrows Island Lighthouse to the Northwest Schooner Society, and the Coast Guard cleaned up lead contamination at the site before the society obtained title to the property later that year. Northwest Schooner Society plans to create an interpretive center within the lighthouse itself and offer multi-day Lighthouse Keeper Programs, where participants can stay in the Craftsman-esque keepers duplex. Thanks to grants from Washington Trust for Historic Preservation, Washington State Lighthouse Environmental Program, and Pacific Medical Centers, restoration of the station started in 2011 with the goal of having the buildings weather-tight and safe by fall. Please visit the societys Burrows Island Lighthouse website for information on helping with the restoration or visiting the station.

For a larger map of Burrows Island Lighthouse, click the lighthouse in the above map.

A distant view of the lighthouse is possible from the ferries that sail between Anacortes and the San Juan Islands. Look south with your binoculars shortly after the ferry departs Anacortes. A closer view of the lighthouse can be had by taking a Burrows Island Kayak Tour or may be possible from a Whale Watching Trip out of Anacortes. When the station is restored, Northwest Schooner Society will start offering access to the station.


We took a kayak trip out of nearby Skyline Marina to get a close view of the lighthouse. The paddle around the island with a stop at the lighthouse took about three hours. Along the way, we observed some wildlife including a bald eagle, coyote, and several kingfishers. Our guide also pointed out the abundant marine life visible due to the extremely low tide, and she even had us sample some seaweed that was surprisingly not too bad.