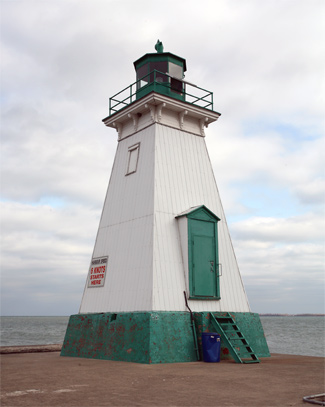 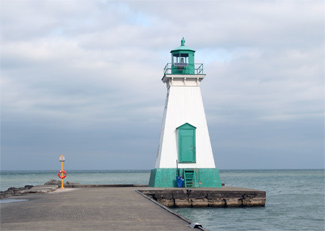 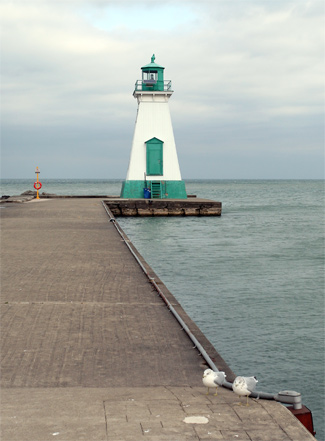 Port Dalhousie served as the Lake Ontario terminus for the Welland Canal from 1829, when the canal opened, until 1932 when the canals entrance was shifted roughly four kilometres to the east to Port Weller. A lighthouse was marking Port Dalhousie as early as 1833, for in that year, funds for nails and wicking for the lighthouse were provided. A severe gale in early 1837 destroyed the lighthouse and injured most of the east pier, requiring 1,245 feet of it to be rebuilt. A frame lighthouse was hastily built as a replacement. As part of the improvements made during the construction of the second version of the Welland Canal, a new harbour was built at Port Dalhousie that provided a depth of twelve feet instead of eight-and-a-half feet. Parallel piers were carried roughly 2,000 feet out into Lake Ontario, and then in 1850, the east pier was capped with a circular wooden lighthouse that stood forty-four feet tall. A revolving lighting apparatus with ten lamps and reflectors was used in the towers lantern room to produce a flashing light that could be seen up to twelve miles and that was hailed as one of the best on Lake Ontario.

Jonathan Woodall had been keeper of the light at Port Dalhousie for over twenty years when he retired in 1872 and was replaced by William Woodall. One of the towers circular-burner lamps exploded in 1876, causing a fire that badly damaged the lighting apparatus and lantern room. As a result, a new iron lantern room with thirty-by-sixty-inch glass panes was installed along with a new revolving lighting apparatus that had six circular Silber burners and a like number of eighteen-inch reflectors.

In 1878, a square, wooden tower was built at the end of a new pier, about 300 feet north of the existing main lighthouse, to form a set of range lights for entering the canal. The main lighthouse stood upon a cribwork block attached to the east pier, and in 1893, this foundation was found to be settling due to the rotting of the timberwork. William H. Noble, foreman of works for the Department of Marine, built a new foundation for the lighthouse consisting of a circular steel casing filled with cement, but when preparations were being made to relocate the lighthouse to the new foundation, it was found to be in such poor condition that a new tower was deemed necessary. The lantern and illuminating apparatus from the previous lighthouse were used on the new one, and the total cost for the work came to $2,157.51.

In response to requests from steamship owners, a large bell, provided by the Lakeside Navigation Company, was attached to the front light at Port Dalhousie in 1896. The bell was rung by hand by the keeper and replaced a less powerful hand-operated foghorn.

The Department of Railways and Canals replaced the decayed cribwork top of the east pier with concrete in 1896, and at the same time, the Department of Marine built a substantial concrete foundation for the outer range light. As part of this work, the elevated wooden walkway was taken down, and a new one supported by steel bents was erected.

At 8:05 a.m. on August 12, 1898, the inner lighthouse, erected just five years earlier, was struck by lightning and burned to the ground. Fortunately, Captain David Hunter, the lighthouse keeper, had just finished his mornings work and had gone home for breakfast.

William H. Noble returned to Port Dalhousie and built the octagonal, wooden lighthouse that remains standing today. Instead of placing the lighthouse where the former one stood, a site on shore, just east of the pier, was selected, where the new tower would be 1,500 feet from the outer lighthouse and provide a better range for entering the canal. A fixed red light was shown from the framework of the lighthouse until the tower was completed at a cost of $2,943.19 and placed in operation. On June 1, 1902, the range lights were electrified, and the characteristic of the inner light was changed from fixed red to occulting white.

A diaphone fog alarm, operated with air compressed by an electric motor, was installed in the outer lighthouse in 1908. The Wilson Building and Contract Company of St. Catharines modified the tower so the foghorn could protrude through its lake-facing side at a height of twenty-eight feet. An oil engine replaced the fog alarms electric plant in 1912.

The range lights were automated in 1968, and the inner light was deactivated after the close of the 1988 navigation season. The outer 1878 lighthouse remains active today showing a light that is on for two seconds and then off for two seconds.

The discontinued inner lighthouse was designated a Recognized Federal Heritage Building in 1990, and in 1997 it was transferred to the City of St. Catharines. The lighthouse was restored between 2000 and 2002, at which time metal siding that was placed on the tower by the Coast Guard to prevent vandals from using the lighthouses wood to start fires was removed.

The inner lighthouse has a couple of unusual features:

In 2010, the St. Catharines councillors agreed to pay Scott Construction Niagara Inc. $180,000 to restore and repaint the exterior of the inner range lighthouse. The restoration was part of a four-part project that would qualify for $1.9 million in federal funding if the work could be completed by March 31, 2011.

For a larger map of Port Dalhousie Range Front Lighthouse, click the lighthouse in the above map.

From Queen Elizabeth Way in St. Catharines, take Exit 47 and go north on Ontario Street for 2 km (1.25 miles). Ontario Street will become Lakeshore Road right before you turn left onto Lighthouse Road, which will lead to Port Dalhousie Yacht Club. Parking near the pier on which the range lights are located is available.


The Port Dalhousie Front Range Light can be see in the final scene of the movie "The Skulls."