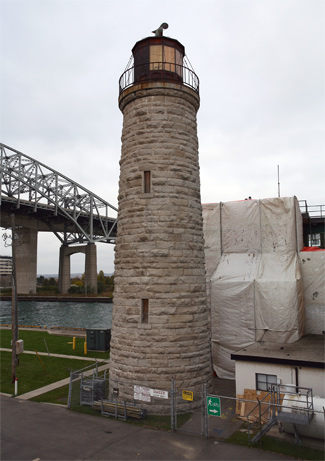 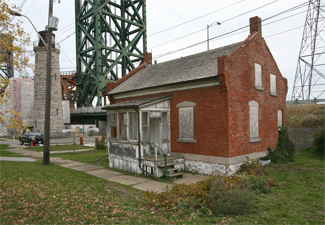 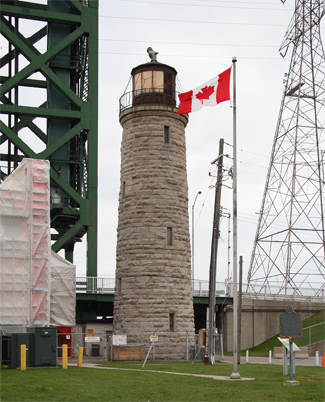 A low-lying sandy barrier known as The Beach separates spacious Burlington Bay from the western end of Lake Ontario. A natural channel previously connected the upper end of the bay with Lake Ontario, but as it was too shallow for navigation, James Crooks, a Hamilton merchant urged the House of Assembly in 1823 to authorize the construction of a canal to link Lake Ontario to Burlington Bay.

In 1824, four commissioners were appointed to superintend the construction of a navigable canal between Burlington Bay and Lake Ontario. After determining that a canal anywhere north of the bays natural outlet would require excavation through stone, the commissioners decided the cut should be made half-a-mile south of the outlet, where the beach or sand bar had a width of 540 feet. A contract was awarded to Messrs. Strowbridge, Hayes, and McKeen, with a completion date set for October 1, 1825. The death of McKeen, who had helped with construction of Buffalo harbour, coupled with delays in obtaining a dredging machine and other unforeseen difficulties, forced the commissioners to push back the completion date by a year.

Lieutenant Governor Sir Peregrine Maitland officially opened the waterway on July 1, 1826, but when October arrived and the canal was still not completed, an engineer from the Welland Canal was engaged to evaluate the work and estimate the cost to finish it. Defects were found in the canal, and the entire 1827 season was lost as the primary contractor and commissioners placed blame for the deficiencies on each other.

William J. Kerr was appointed superintendent in charge of completing the canal in early 1828, and during the ensuing season, he repaired the parallel piers, allowing the canal to be used for navigation. New commissioners were appointed in 1830 to complete, secure, and make permanent, the Burlington Canal, and this work was contracted to Messrs. Mann and Spawn, who erected a swing bridge to span the canal and began raising and extending the existing piers. When they abandoned the project, Job Loder, their insurer, stepped in and continued the work, but it was William J. Kerr who completed the canal and erected lights to mark it during the 1832 season. In 1833, the Parliament of Upper Canada provided £100 annually for the commissioners of Burlington Canal to hire a lighthouse and bridge keeper.

Using a portion of the proceeds raised by the toll required of ships passing through the canal, John L. Williams was contracted to build a wooden, octagonal, fifty-four-foot-tall lighthouse for the canal in 1837. A new front range to this lighthouse was established in 1845 at the end of the pier in the form of a square, wooden tower that stood fourteen feet tall.

As steamers transited the waterway, they would often rub against the canals wooden piers, and occasionally this friction or sparks from the steamers smokestack would catch the piers on fire. On several occasions, George Thompson, who served as the canals ferryman before being made keeper of the lights in 1861, had to douse fires on the piers.

At 4 p.m. on July 18, 1856, the steamship Ranger caught a pier on fire as it passed through the canal. High winds quickly spread the fire, leading to the destruction of the octagonal lighthouse and other nearby structures. Thompson recorded the event in his diary: Large lighthouse caught fire by a spark from the steamer Ranger. Burnt to the ground with ferry house, lightkeepers house and my own dwelling house. Great number of tools, clothing and other articles destroyed. Until a new dwelling could be built, Thompson was required to live in a shanty while continuing his duties.

A new redbrick keepers dwelling was built in 1857, and that same year, John Brown started work on the foundation of a fireproof lighthouse for Burlington Canal that would be built at a cost of $10,479.98 using blocks of dolomite limestone. The sixty-foot-tall tower is very similar to the six Imperial Towers that Brown erected on Lake Huron and Georgian Bay around this same time. To form the foundation, piles were driven deep into the ground and then capped with timbers and cement. The wooden portion of the foundation was laid below water level so it would always be covered and protected against decay.

The new lighthouse was the first in Canada to burn coal oil, and this move away from whale oil angered whalers, who felt their livelihood was being threatened. Though officials reported the coal oil did not congeal at the temperature that other oils did, Keeper Thompson still had problems during the winter: I had much trouble in warming the coal oil in the pier and lighthouse. I wrapped the oil lamps all round with flannel and rope yarn. I was wearing mittens with the earflaps of the cap down. I kept the large lighthouse burning but the coal oil partially froze!

George Thompson kept the Burlington Canal Lighthouse for several years before poor health forced his retirement in 1875. He passed away a few years later in 1879.

While the Imperial Lighthouses on Lake Huron were equipped with Fresnel lenses, the stone tower at Burlington Canal used the older catoptric system as evidenced by this report from 1876 when Thomas Campbell was in charge of the light:

There are six base-burner fountain lamps, and six 20-inch reflectors on two iron frames. One lamp shows towards Hamilton and five show out. The lantern is made of iron, has an iron floor, and measures eight foot across. The glass is 14 1/2 x 18 inches. The tower is a white round, stone building 60 feet high. There is a storm-signal drum attached. The place is well kept. The range light, which is under the care of the same keeper, has two base-burner fountain lamps on a frame, and one 20 and one 16-inch reflector. The lantern is three feet in diameter, with glass 14 x 16. The light is 28 feet high from the pier. It is also well kept.

The main light was improved in 1891 by replacing the old lantern and illuminating apparatus with new ones of modern pattern at a cost of $1,290.71. The stone lighthouse finally received a fourth-order Fresnel lens in 1911, and its illuminant was changed to petroleum vapour burned under a incandescent mantle at that time.

In 1896, the keepers dwelling was relocated to its present location to make room for the construction of a swing bridge for a new railway. Prior to its move, the front door of the dwelling faced the canal. The swing bridge is no longer standing, but there are three bridges spanning the canal near the lighthouse. Immediately east of the lighthouse is a lift bridge, constructed in 1962, and farther west are the two spans of the Burlington Skyway, part of the Queen Elizabeth Way. The first of the bridges opened in 1958, while the second was completed in 1985 to accommodate increased traffic volume.

Captain Thomas Campbell was serving as keeper of the Burlington Canal lights in 1900, when the pierhead light was nearly lost to fire. Due to heavy fog, Keeper Campbell spent much of an October night at the end of the pier anticipating the arrival of the steamer Macassa, when he heard a large crash and saw the light go out. He rushed into the pierhead lighthouse and was greeted by a large red-headed duck that came rolling down the stairs. Closing the towers door, Campbell climbed up to the lantern room and discovered that the duck had crashed through one of the lantern rooms panes and overturned the lamp. A small fire had started in the lantern room, but after considerable effort, Campbell was able to extinguish it. He then turned his attention to the duck, which he captured and killed. The newspaper account of the incident stated that he intended to have the duck stuffed.

A new front range lighthouse was built on the outer end of the south pier in 1905 in the form of an open-frame, steel tower surmounted by a square, iron lantern room. This tower was provided by Messrs. Gould, Shapley & Muir, of Brantford, Ontario at a cost of $356 and was painted red. The 1905 skeletal tower was replaced in 1910 by a forty-one-foot-tall reinforced steel concrete lighthouse tower, octagonal in plan, surmounted by an octagonal iron lantern. This new tower was built at a cost of $3,970.32, and a one-inch diaphone plant, powered by a gasoline engine, was installed inside it.

The pierhead light and fog alarm were electrified in 1922, and the main light followed suit the next year.

The present white, square, pyramidal, concrete tower found at the outer end of the south pier was built in 1939, at which time it was equipped with a fixed green light and an electrically operated tyfon horn.

Pete Coletti was serving as keeper of the Burlington Canal lights when the 1858 stone tower was decommissioned in 1961 and replaced by a light mounted on the south tower of the railway bridge. Coletti continued to serve as keeper of the various canal lights until 1987, when the station was automated and the redbrick keepers dwelling left vacant.

In May 2003, two local residents approached the Department of Fisheries and Oceans (DFO) to determine if the lighthouse and keepers dwelling could be preserved. The positive reception they received spawned hope for the effort, and on November 16, 2003, the founding meeting of The Lighthouse Project was held, with thirty-two people in attendance. Officers and directors were elected at this first meeting, and at a general meeting held on January 11, 2004, the membership adopted its official name: Beach Canal Lighthouse Group.

The DFO could not turn the tower over to the Lighthouse Group in a toxic condition, so in 2006 $25,000 was paid to Restoration Environmental Contractors of Gormley to remove decades of bird droppings from the interior of the lighthouse. As water blasting would have damaged the structure, a three-man crew, outfitted with airtight suits and gas masks, employed wire brushes to clean the stonework.

Since its inception, the Lighthouse Group has been actively raising funds and working towards restoring and opening to the public both the tower and keepers dwelling. In 2007, the City of Hamilton provided $50,000 to the group so a Business and Operation Plan and Cultural Heritage Assessment could be prepared. The original plan was to permit visitors to enter the site in 2008, the 150th anniversary of the lighthouse, but this goal was not achieved.

Under the Heritage Lighthouse Protection Act passed in 2010, over 1,000 Canadian lighthouses, including Burlington Canal Main Lighthouse, were declared surplus. These properties are now eligible to receive a heritage designation through Parks Canada and be transferred to cities or preservation groups. In 2011, Hamiltons emergency and community services committee rejected a plan for the city to assume ownership of the vacant lighthouse and keepers cottage, but the Beach Canal Lighthouse Group plans to submit an application for heritage designation and eventual ownership of the lighthouse.

For a larger map of Burlington Canal Main Lighthouse, click the lighthouse in the above map.

From the QEW south of Burlington, take Exit 93 and follow Eastport Drive north to the parking lot at the southern end of the lift bridge.

A lens used in the lighthouse is at Joseph Brant Museum in Burlington, but it is not on display.