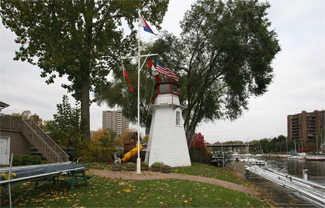 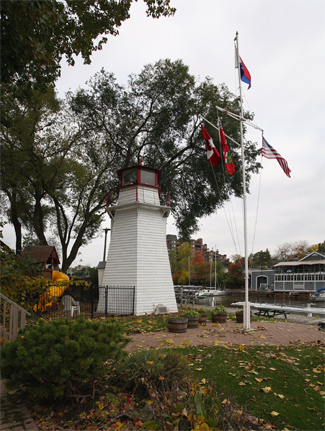 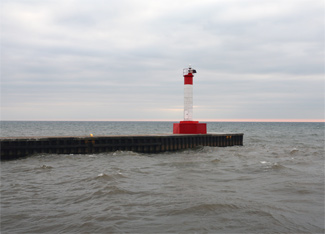 William Chisholm was born on October 15, 1788 in Jordan Bay, Nova Scotia, where his father, a loyalist, had emigrated during the American Revolution. When William was five, his family relocated to Upper Canada, and in 1812, he married and then three months later participated in the capture of Detroit during the War of 1812. After the conflict, William settled on a farm in Nelson Township and began his career that would span politics, shipping, lumbering, and a mercantile business. Chisholm served as one of the commissioner charged with overseeing the construction of the Burlington Canal, and in 1827, he convinced Lieutenant Governor Peregrine Maitland to auction off 960 acres of land at the mouth of Sixteen Mile Creek that had been reserved for the Mississauga Ojibwa Indians. Chisholm won the auction in the summer of 1827 at a cost of £1,029, and within a year, he had laid out the town of Oakville and built a warehouse.

In 1828, Chisholm succeeded in having an acted passed that gave him control of the harbour at Oakville for the next fifty years, and that August Chisholms men launched the first in a long series of schooners form his Oakville shipyard. Besides the shipyard, Chisholm also owned the villages first tavern, sawmill, and grist-mill, and through the years, he served as collector of customs and postmaster.

In February 1837, the government of Upper Canada appropriated £500 for erecting a lighthouse at Oakville, and appointed three men, one of whom was William Chisholm, to oversee the project. The commissioners provided the following report following the completion of the lighthouse:

The Commissioners advised with several of the Masters of Vessels, respecting the proper place to erect the Light-house, and after due consideration, the end of the Pier was decided upon. To make the foundation sufficient, it was found necessary to sink three additional cribs.

The foundation was commenced on the 22nd of August, 1837, and with the Light-house, was completed on the 1st day of November, 1838, and has, since that time, been regularly lighted.

The Commissioners would respectfully beg leave to state, that having thus closed their proceedings, are of opinion, that the Light-house at Oakville is inferior to none on Lake Ontario, and trust that the duty assigned to them has been discharged in a manner that may be found satisfactory.

The cost of the lighthouse, a wooden, octagonal tower with a height of thirty-six feet, came to £852, with William Chisholm paying for the £352 overrun.

It is likely that William Chisholm oversaw the keeping of the lighthouse as part of his responsibilities as collector of customs. In 1840, Chisholm incorporated the Oakville Hyrdaulic Company to further develop the water power of Sixteen Mile Creek, but this venture failed and brought down with it most of Chisholms empire. Chisholm declared bankruptcy in 1842 and died shortly thereafter at the age of fifty-four.

Robert Chisholm followed in his fathers footsteps and became responsible for the port upon his fathers death. By 1866, Robert was serving as lighthouse keeper, a position he held until he was superannuated in 1894 at the age of seventy-five. Erchless, a redbrick mansion whose name means by the stream in Gaelic, was home to six generations of the Chisholm family before being purchased by the Town of Oakville in 1977. Since 1991, Erchless Estate has been open to the public as part of the Oakville Museum, which also includes the custom house, and the old post office.

The demise of the first Oakville Lighthouse was noted in the report of the Department of Marine for 1886:

The great easterly storm of the 7th April last destroyed the east pier at the entrance of Oakville Harbour, Lake Ontario, and carried away, with the pier, the lighthouse standing upon its outer end. A temporary light was immediately thereafter established on the beach beside the inner end of the pier, and at the present entrance to the harbour. It consists of a fixed white light, shown from a tubular lantern, elevated on a mast 28 feet above the ordinary level of the lake, and should be visible 10 miles from all points of approach. Nothing can be done towards erecting a new lighthouse until the breakwater pier has been rebuilt.

The Public Works Department rebuilt the east pier in 1887, and the temporary light was moved to its outer end. That same year, John George of Port Elgin was awarded a $937-contract for erecting a new lighthouse on the pier.

The new lighthouse, a hexagonal wooden tower surmounted by an iron lantern, was placed in operation on June 4, 1888. A sixth-order lens was used in the lantern room of the tower to produce a fixed white light at an elevation of thirty-nine feet above the lake. The tower itself measure thirty-one feet from its base to the vane on its lantern, but it was placed atop a cribwork block that stood six-and-a-half feet above the pier.

Damage to the pier necessitated moving the lighthouse sixty feet shoreward in 1893 and another thirty-six feet the following year. In 1895, the tower was moved to the inner end of the pier to protect it.

After the pier was repaired, the tower was returned to the outer end of the east pier, where it served until 1960, when it was moved to the grounds of The Oakville Yacht Squadron and replaced by a cylindrical cement tower. Today, a cylindrical white tower with a red upper portion displays a flashing red light from the east pier.

For a larger map of Oakville Lighthouse, click the lighthouse in the above map.

From Highway 403 (QEW) at Oakville, take Trafalgar Road Exit and travel south for 2.3 km (1.4 miles), and then turn right onto Lakeshore Road. Immediately after crossing the bridge over Sixteen Mile Creek, turn left onto Forsythe Street, then immediately left again onto Francis Street, which leads to Shipyard Park and Oakville Yacht Squadron.