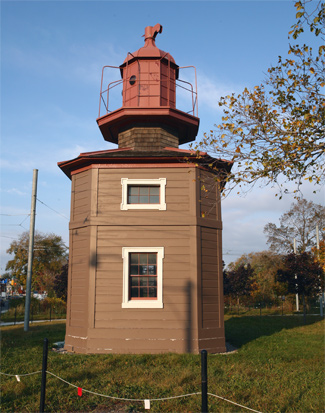 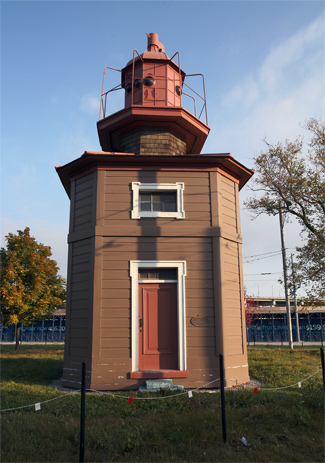 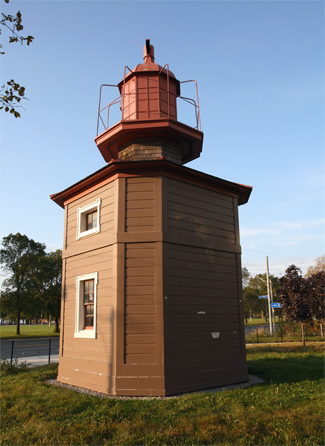 Torontos Fort York today lies sandwiched between Gardiner Express Way to the south and railway lines to the north, a fair distance from the harbour, but when a garrison was first constructed there in 1793 by order of Lieutenant Governor John Simcoe, the site was situated on the west side of the junction of Garrison Creek and the harbour. In 1830, a pier was extended into the harbour from the east side of Garrison Creek near what is today the intersection of Bathurst Street and Front Street. This pier was originally known as the New Pier, but after Queen Victoria ascended to the throne in 1837, it became known as Queens Wharf. Queens Wharf served the dual purpose of providing docking facilities and constricting the entrance to the harbour so that the increase in speed of the water flow would hinder the growth of a sandbar that extended from an offshore island and frequently blocked the harbour. The wharf was extended to a length of 250 metres in 1837 to reach water that was three metres deep, and a seventy-five-metre east pierhead was added at the same time. During the 1850s, the wharf was widened and a 120-metre west pierhead was added. Construction excavations made in 2006 and 2008 near the intersection of Bathurst Street and Fleet Street revealed large, well-preserved sections of the wooden cribs used to form the pierheads on Queens Wharf.

In 1838, a square, wooden tower, which stood sixteen feet tall, was placed on Queens Wharf as a guide for vessels entering Toronto Harbour. A second taller lighthouse, the one now known as Queens Wharf Lighthouse, was erected in 1861 to form a set of range lights that more accurately defined the approach. Kivas Tully, a noted architect, designed the 1861 lighthouse and an accompanying keepers dwelling for the Commissioners of the Harbour of Toronto, who were responsible for Queens Wharf. Tenders for constructing the lighthouse and dwelling were invited through advertisements published in all the provincial papers in May and June of 1861, and the structures were completed later that year. The 1861 lighthouse is a square, wooden structure, whose corners are trimmed to give it an octagonal shape. A Light List from 1878 indicates that the taller tower stood on the western part of the wharf, while the shorter one was located on the arm of pier.

The White Lighthouse indicating the direction of the range course when in line with Red Lighthouse, was moved about 30 feet to the north-west corner of the Queen's Wharf, the new bearing being north 29' 30" east. This change was made to avoid dredging on the north-west point of the shoal, which has extended 400 feet in ten years and is steadily increasing.

In its new position, the front lighthouse was 215 feet southwest of the rear light, and together the two lights marked the western entrance to Toronto Harbour.

Early in the morning of November 21, 1906, the steam barge Resolute and its partner schooner P.B. Locke arrived at Toronto Harbour laden with coal from Erie, Pennsylvania for the Toronto Electric Company. As stormy weather prevented the ships from entering the harbour through the east gap, they sought shelter near the western entrance to the harbour, which was too shallow for them to use. While waiting for the weather to improve, the Resolute began taking on water and its cargo shifted. Two lifeboats were launched, but one quickly capsized, sending its five occupants to a watery grave.

Following this tragedy, The Globe, A Toronto newspaper, called for improvements at the western gap:

It will be a standing disgrace to the government of Canada and to the city of Toronto if the work necessary to make this a harbour of refuge is not undertaken at once and completed with all practicable speed. As there is nothing but dredging and pier building to be done the work may be carried on with great rapidity. The wreck of the Resolute, with its attendant loss of life, is a warning that cannot be ignored. A similar tragedy might happen any time during the season of navigation. At present there is no harbour of refuge on the north shore of the lake between Wellers bay and Burlington bay  a state of affairs for which the Dominion government and parliament will have to bear a full share of responsibility.

In 1908, a contract was awarded to R. Weddell & Co. to build a new western channel for entering Toronto Harbour. Work on the project commenced that July, and when completed in 1911, it consisted of parallel piers spaced 400 feet apart that were 1,000 feet farther south than the previous entrance. A new location was chosen for the western entrance as deepening the former one would have required blasting through solid rock.

During 1912, a reinforced concrete tower was constructed on the outer end of the south pier to serve as a front light and a two-section, steel, skeletal tower surmounted by a wooden watchroom and lantern room was placed toward the inner end of the south pier to form a set of range lights for entering the new western entrance. A dwelling was also built for the keeper of the new range lights.

While preparations were being made for a new western entrance, the lights used to mark the old one were nearly lost. In its report for 1908, the Harbour Commissioners noted: On July 8 a fire broke out at the Queens wharf, consuming the boat house and contents, and threatening total destruction to all the Commissioner property. By strenuous efforts, the lighthouses and the dwelling house were saved, but more or less injury was done to both. A new iron boat-house, of more convenient proportions, has been erected, the amount of insurance being almost sufficient for the outlay.

No longer needed after the opening of the new western entrance, the range lights on Queens Wharf were discontinued at the end of the 1911 shipping season. For many years, Torontos three major railway companies had been filling in the harbour around Queens Wharf to create land for their yards and harbour facilities, and by the time its range lights were discontinued, the wharf was only a stub.

On September 1, 1918, the abandoned front range light on Queens Wharf was destroyed by fire, and in 1929, the Toronto Harbour Commission transferred ownership of the remaining lighthouse to the City of Toronto. In late 1929, the lighthouse was placed atop wooden rollers and pulled roughly 450 metres west to its present location. The distance from the lighthouse to the water gives an indication of just how much the harbour was filled in over the years. Queens Wharf Lighthouse was painted white for some time in its new location, but it is now a more historically accurate reddish brown.

For a larger map of Queen's Wharf Lighthouse, click the lighthouse in the above map.