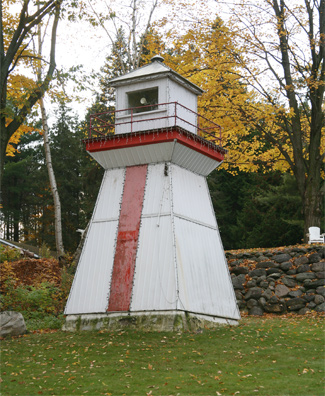 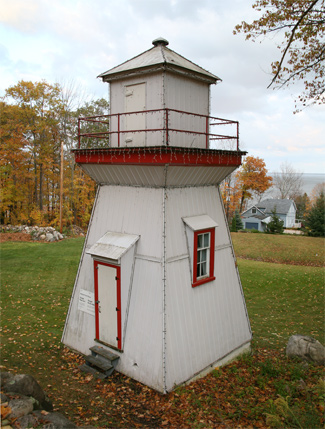 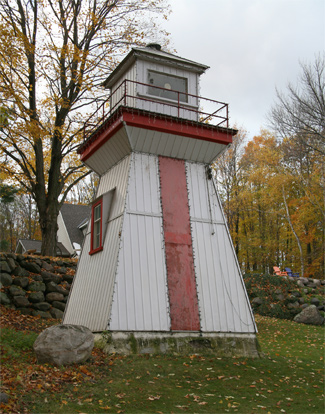 Founded in 1871 after being selected as the terminus for a railway, Midland has been home to the Midland Shipbuilding Company, the Georgian Bay Shipbuilding and Wrecking Company, and The Midland Boat Works, which have built some of the largest vessels to ply the Great Lakes.

At the opening of navigation in 1899, the Department of Marine established two sets of day beacons to help mariners reach Midland. The first pair was placed on Brebeuf Island and Beausoleil Island, and the second just north of Midland Point. The following year, the Department of Marine replaced the day beacons with range lights and published the following description of the new Midland Point Range:

Midland point range front light.  This is a fixed white light elevated 31 feet above water level. The illuminating apparatus is dioptric of the seventh order.

The light is shown from a tower erected upon the site of the beacon which it replaces on the beach 6 cables S. 54° E. from Sucker creek point, and northerly from Midland point.

The tower stands on a cribwork pier 4 feet high, and is a square wooden building with sloping sides, painted white, surmounted by a square wooden lantern painted red. It is 33 feet high from its base to the ventilator on the lantern.

Midland point range back light.  This is a similar light to the front one, shown from a similar tower, erected upon the site of, and replacing, the back range beacon, on the beach, 3,000 feet S. 17° E. from the front one. The tower is 43 feet high and the light is elevated 41 feet above water level, and should be visible 11 miles from all points of approach by water.

These two lights in one lead in, from the intersection with the alignment of the Brebeuf range lights to within half a mile of the front tower, where the lights should be opened on the starboard hand. The shore here is bold and may be kept close aboard until Midland point is rounded.

The above work was carried out by day's labour, under the supervision of Mr. W. H. Noble.

In 1901, a third set of range lights, known as Midland Range and consisting of red incandescent lights shown from lamps atop electric lights poles, was established on the hill in Midland near Ottawa Street to lead mariners from Midland Point up to the wharves in Midland Harbour. The Midland Electric Company was paid $150 to erect the poles and string the necessary wires.

Midland Point Front Range Lighthouse was relocated in 1907 to a new foundation, consisting of a square concrete pier with battered sides, which was built just north of the original foundation. This change elevated the front light by one foot and increased the distance between the range lights by twenty feet.

Napoleon Somers served as the first keeper of Midland Point Range Lights. Frederick Somers took charge of the lights in 1911, but he was dismissed the following year after charges were brought against him. Thomas Williams, the third keeper of the lights, served from 1912 until 1938.

On October 21, 1912 the following Notice to Mariners was published to announce the establishment of a new set of range lights on Midland Point, one and two-thirds miles south of the old Midland Point Range:

To mark the approach from Midland Point to Victoria Harbor, a range of fixed white reflector-lantern lights, visible about 8 miles, shown from poles with white diamond-shaped daymarks attached, have been established. The front light is about 2,500 feet northward of Midland Point, 62 feet back from the water's edge; the rear light is 225 feet 283° (WNW. 7/8 W.) from the front light.

In approaching, the old Midland Point range is followed 157° (SSE) until Candlemas Shoal buoy is abeam, when the course should be changed to 144° (SE. 3/4 S.) and kept to the intersection with the new range above described, and the latter (astern) held 103° (ESE. 7/8 E.) until the Victoria Harbor range is brought on.

Under the provisions of the Federal Heritage Lighthouse Preservation Act, Midland Point Range Lights, which were discontinued in the late 1990s, were made available to the local community or any interested non-profit organization. At the urging of the Midland Heritage Committee, the Midland Council submitted a petition to Parks Canada in 2012 indicating the towns interest in acquiring the lighthouses. The Heritage Committee considered several options for the range lights including moving one or both of them to a new location where they could be more readily visited by the public, but they ended up favoring a plan that would leave them in their current location. As the small government-owned parcels on which the range lights stand are surrounded by private property, restoring the lights and providing public access to them will be problematic. Restoration of the towers is expected to cost around $200,000.

Located on the grounds of Beacon Shore Bed and Breakfast on Midland Point, just north of the harbour at Midland.
Latitude: 44.78713, Longitude: -79.86747

For a larger map of Midland Point Range Rear Lighthouse, click the lighthouse in the above map.

The lighthouse is owned by Beacon Shore Bed and Breakfast. Grounds/tower closed.