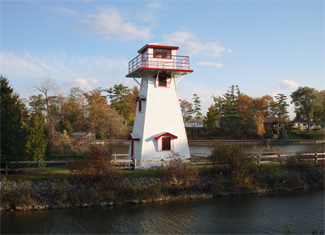 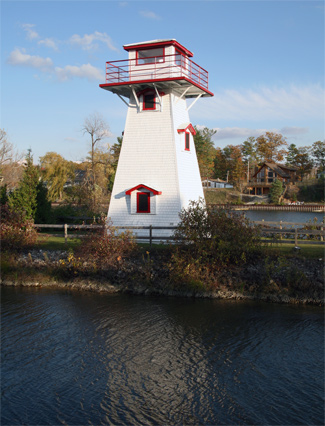 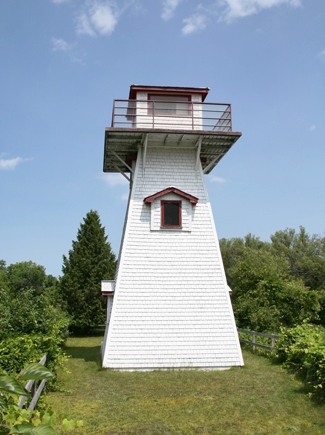 The schooner Nancy was built at Detroit in 1789 for use in the fur trade. Calling on remote outposts like Sault Ste. Marie and Fort Michilimackinac, she would supply needed goods such as blankets, meat, tools, food, weapons, and ammunitions and pick up furs to be carried back to civilization.

When war was declared between the United States and Britain in 1812, the schooner was requisitioned as a British transport. The defeat of the British Fleet on September 9, 1813 in the Battle of Lake Erie left the Nancy as the only British ship on the Great Lakes.

On August 14, 1814, three American schooners, Niagara, Tigress, and Scorpion, arrived at the mouth of Nottawasaga River, where they planned to await the return of the Nancy from Fort Michilimackinac. While gathering wood onshore, the Americans discovered that the Nancy was actually hidden a short distance up the river. A battle ensued in which the Nancy caught fire, burned to the waterline, and sank.

Over time, the river deposited silt around the sunken vessel forming a small island. In 1928, the hull was raised and placed on display on what is now known as Nancy Island. As part of a Canadian centennial year project in 1967, a lighthouse was built on tiny Tower Island, which is accessed by a foot bridge from Nancy Island. This tower was designed as a replica of the Collingwood Outer Range Front Lighthouse that was constructed in 1894. At the time the replica lighthouse was built, Nancy Island was known as the Museum of the Upper Great Lakes, and the lighthouse was used as part of a maritime theme. Visitors can climb the tower to see a fourth-order lens in the lantern room.

In 2008, the lighthouse received a makeover by Renovations by Rick. Rick Deveaux and his crew spent just over a month installing a new railing around the top of the tower, replacing the windows, and covering the tower with cedar shingles. The Town of Wasaga Beach funded the $32,000 renovation, and on Friday October 3, the Minister of Natural Resources cut a ribbon to officially reopen Nancy Island Lighthouse.

The history of lighthouses at Collingwood began in the 1800s when the Northern Railway of Canada built a harbour light there. In 1877, the government of Canada assumed responsibility for the light and appointed Robert Doherty its keeper at an annual salary of $200. This early lighthouse was a white, wooden tower with a wooden lantern that had a diameter of six feet and was situated on the breakwater. When Keeper Doherty died in 1881, the government appointed William Bishop as the next keeper.

In 1883, tenders were invited for the construction of a detached pier in Collingwood Harbour and a light to sit atop the pier. Robert Reed of Thornbury was given the contract for the work, which was completed the following year. The light on the small pier was displayed from a lantern that was hoisted atop a mast that had a shed at its base. The pier was located at the most southwesterly point of the starboard side of the curved dredged channel in the harbour, and its red light was meant to be shown only with the limits of the harbour.

In 1894, the pier light at the turn of the dredged channel in the harbour was improved by replacing the mast light with a square, wooden, pyramidal tower topped by a square, wooden lantern. The height of this enclosed lighthouse was twenty-seven feet, and it first displayed its fixed red light on August 10, 1894. D. Peterman & Son of Collingwood built the lighthouse for $195.

In 1902, the Corporation of Collingwood built a set of range lights on shore in the southern end of the harbour to indicate the middle of the twenty-foot channel from its outer extremity beyond the west breakwater pier to the curve where the fixed-red pier or crib light was located. The front light of this range was produced by two lanterns that were hoisted on a white pole that had a diamond-shaped, slatted daymark at its top and was located 330 feet from the northwest extremity of Flemings Wharf. The two lanterns were separated vertically by six feet and exhibited white lights. Two lanterns with the same vertical spacing were exhibited from a taller pole located near the intersection of Second Street and Cedar Street to form the rear light of the range. Two day beacons, one consisting of a diamond-shaped slatwork at the top of a mast located on the northwest end of the elevator wharf and the other a white diamond painted on the elevator, led vessels from the curve in the channel to the elevator wharf.

The lighthouse at the turn of the dredged channel in Collingwood harbour was removed to a new square cribwork pier, distant 191 feet N. 38° W. from the old pier, and 2,500 feet N. 50° W. from the northwest corner of the Grand Trunk Railway freight shed wharf. This light constitutes the front light common to two ranges, one range leading into the curve in the dredged channel, and the other leading from the curve of the dredged channel to the Grand Trunk Railway freight shed wharf. The tower is a square wooden building with sloping sides, painted white, surmounted by a square wooden lantern painted red. The tower is 27 feet high from its base to the top of the ventilator on the lantern. The light is a fixed red dioptric light of the sixth order, elevated 29 feet above the level of the lake, and visible 7 miles in the alignment of the outer and inner ranges.

The back tower of the outer range stands on the mainland, 76 feet back from the waters edge, and 2,644 feet S. 4° W. from the front tower. The tower consists of a galvanized skeleton steel frame, square in plan, with sloping sides, surmounted by an inclosed wooden watch-room painted white, and a square wooden lantern painted white. The tower is 63 feet high from its base to the top of the ventilator on the lantem.

The light is a fixed red catoptric light, elevated 58 feet above the level of the lake, and visible 8 miles in the line of range.

The back tower of the inner range stands on a square wooden cribwork pier, and is distant 1,530 feet N. 50° W. from the front tower. The tower is a square wooden building with sloping sides, surmounted by a square wooden lantern, the whole painted white. The tower is 39 feet high from its base to the top of the ventilator on the lantern. The light is a fixed white catoptric light. It is elevated 34 feet above the level of the lake, and is visible in the line of range. The character of the light shown from the lighthouse on the outer end of the western breakwater was changed from fixed red to fixed white, and was improved by the substitution of a fourth order dioptric illuminating apparatus for the catoptric apparatus formerly used.

In 1910, the light shown from the wooden lighthouse on the crib was improved by installing a fourth-order lens to display the fixed red light of the outer range in the place of the sixth-order lens previously used. A seventh-order lens was then used for the front light of the inner range.

At the close of navigation in 1916, the fixed white light displayed from the octagonal wooden tower on the outer end of the west breakwater pier was discontinued, but the structure was retained as a daymark. The inner or Collingwood Wharves Range was discontinued in 1933.

The wooden tower on the crib at the turn in the channel was removed in 1955 and replaced by a lattice tower. The contractor for the work saved the historic tower, and it still stands today on private property near Collingwood.

The Shore Range with its tall, square, skeleton tower with enclosed upper portion remained active through at least 1970. In 2021, a sector light displayed from a cylindrical tower in Collingwood Harbour served as the main navigational aid for the harbour. Its flashing light was red between 148° and 179°, white between 179° and 182°, and green between 182° and 212°.

For a larger map of Nancy Island (replica) Lighthouse, click the lighthouse in the above map.

In Wasaga Beach, follow Mosley Street north until just before the bridge over Nottawasaga River, where you will find parking for Nancy Island Historic Site. Entrance to the historic site is free, but you do need to pay for parking.

The lighthouse is owned by Ontario Parks. Grounds/tower open.