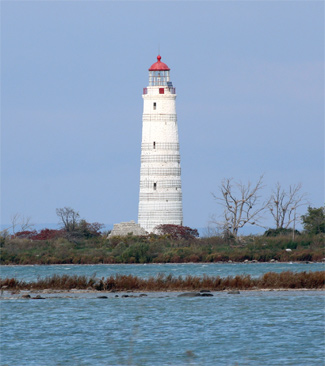 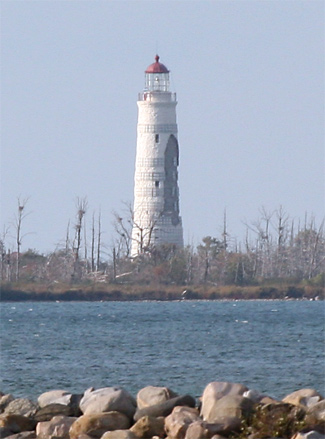 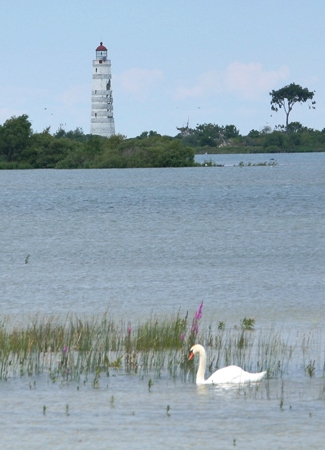 In 1851, Collingwood was selected as the northern terminus of the Ontario, Simcoe and Huron Railway, which would link Toronto on Lake Ontario to Lake Simcoe and Lake Huron. The first train reached Collingwood in 1855, helping it become an important harbour.

The Commissioners of Public Works for the Province of Canada noted the need for additional lighthouses in its report for 1852  1853:

Captain MacGregor, who had been in command of a steamboat on Lake Huron for many years, recommended the construction of nine lighthouses on Lake Huron, Georgian Bay, and the North Channel, including one of Christian Island to help mark Collingwood. John Brown, a builder from Thorold, was contracted in 1855 to erect eleven lighthouses, but only six of them were built at that time. Although it was not one of the lights Captain MacGregor recommended, Nottawasaga Lighthouse was one of the six lights, known now as the Imperial Towers, completed by Brown, the others being: Christian Island, Cove Island, Griffith Island, Chantry Island, and Point Clark.

During 1856, the one-and-a-half-storey dwelling and tower on Nottawasaga Island were finished, save for the installation of the lantern and lighting apparatus, which were provided by the Parisian manufacturer Louis Sautter. Overall, the work on the six lighthouses suffered a serious setback that season as two steamers and a schooner were totally wrecked, and much timber was lost.

A temporary light was established atop Nottawasaga Island Lighthouse during 1857, and its second-order Fresnel lens, which revolved to produce a flashing light that made it distinguishable from the lights of Collingwood, was placed in operation on November 30, 1858. Built of limestone, Nottawasaga Lighthouse stands eighty-five feet tall and was the second of the six Imperial Towers to officially be placed in operation.

Captain George F. Collins, who was born in England and had gone to sea at the tender age of twelve, applied to be the first keeper of Nottawasaga Lighthouse, but for some reason he was placed in charge of Cove Island Lighthouse instead. Longing to be closer to his home in Collingwood, Collins worked out an agreement during the 1859 season with David McBeath, keeper of Nottawasaga Lighthouse, to swap stations.

In 1861, it was noted that the beach on both sides of the lighthouse had washed away and the foundation of the tower had been partly undermined. Though the construction of a breakwater was judged indispensable at that time, it wasnt until 1878 that Joseph White of Ottawa was paid $950 to construct a rip-rap breakwater to protect the lighthouse. In 1876, two years before the breakwater was built, the water level was so high that during stormy weather waves were breaking against the tower with great violence.

A red sector was added to Nottawasaga Light in 1889 to define the outer edge of the shoals located between the island and Collingwood Harbour. The sector covered an arc of thirty degrees, and vessels making Collingwood from the northwest were told to keep north of the red sector until the breakwater light at Collingwood bore southwest, at which point they could steer for it.

Though he was often commended for keeping the station in excellent condition, Keeper Collins is remembered more now for having helped save the lives of numerous people shipwrecked near Nottawasaga Island. Late in the evening of November 24, 1872, the 120-foot steamer Mary Ward, loaded with coal oil, salt, and twenty-seven people, ran aground on Milligans Reef, two kilometres offshore from Craigleith, and a few kilometres west of Nottawasaga Island. Having recently been purchased by five men from Owen Sound for use on the Georgian Bay/Lake Superior route, the Mary Ward was bound for its new homeport of Collingwood.

Though the grounding must have startled the passengers, a quick inspection of the vessel revealed little damage. Frank Moberly, the head of a Canadian Pacific Railway survey party that was aboard the vessel, and George Corbett, one of the ships new owners, set off in a lifeboat for Craigleith, from where they planned to go to Collingwood to enlist the help of a tug. As the bay was calm, it was decided that everyone else would remain aboard the Mary Ward until they could be rescued.

Just after midnight, the wind shifted, and the seas started to increase. By dawn, breakers were sweeping across the stern of the vessel. Captain William Johnson launched another lifeboat and made it safely ashore, but eight men who tried to follow suit later that day drowned when a large wave toppled their lifeboat. One of these men was Charles Campbell, who was anxious to reach his pregnant wife in Craigleith.

When the storm abated later that afternoon, Keeper Collins and his twenty-one-year-old son Charles launched their lifeboat and headed to shore to see how they could help. The tug Mary Ann, which had been dispatched by Moberly and Crobett, proved to be no match for the ferocious seas and turned back. Due to the direction of the wind and waves, Moberly decided that the Mary Ward could only be approached from the west and boarded a train to Thornbury to recruit some of its fishing fleet. Joined by George and Charles Collins, Moberly and several fishermen set off from Thornbury and managed to save those still aboard the Mary Ward.

For helping with the rescue, the government awarded George and Charles Collins and eleven other men the sum of fifteen dollars. In 1879, seven years after the wreck of the Mary Ward, Keepers Collins was presented a silver tea service from the Masonic Lodge in Boston for having saved four of its members in a daring rescue during which Collins capsized four times before reaching the men. Sadly, Keeper Collins was not present to rescue his son Charles when he was knocked overboard while fishing and became entangled in his nets and drowned. After receiving the news of his sons death, Keeper Collins paced the shores of Nottawasaga Island all night in anguish. Keeper Collins was in charge of Nottawasaga Lighthouse for thirty-one years, far longer than any of his successors.

The era of resident keepers on Nottawasaga Island ended in 1958 after a fire severely damaged the keepers dwelling. The light was automated at this point, but a keeper with other responsibilities still kept an eye on it.

An engineering study of the tower commissioned in 2002 estimated that the lighthouses outer wall, which had visible cracks likely caused by lightning strikes and years of freeze-defrost cycles, would fail in about five years if needed repairs were not carried out. This estimate proved to be optimistic as in late 2004 a large section of the outer wall on the northeast side of the tower collapsed. The Coast Guard had officially decommissioned the light in 2003 due to the unsafe condition of the lighthouse, but the automated solar-powered light continued to operate on its own for several more months.

In 2005, the Minister of Fisheries and Oceans announced that $230,000 in federal funds would be spent to stabilize the tower and install improved lightning protection. That fall, Roof Tile Management, Inc. chipped away loose rock, coated the exposed inner surface, and wrapped the tower with seven reinforcing bands. After the collapse, the estimated cost of restoring the tower rose from roughly $600,000 to several million dollars, but the Nottawasaga Lighthouse Preservation Society is working diligently to secure the necessary funding. In 2014, volunteer engineers were granted access to Nottawasaga Island and found that the stability of the structure is still good. You can track the societys progress on their facebook page.

For a larger map of Nottawasaga Island Lighthouse, click the lighthouse in the above map.

The closest land to the island is a community of private homes, where a distant view of the lighthouse is possible from Princeton Shores Park on Princeton Shores Road. (There are a pair of tennis courts in the park.)

A more distant view of the lighthouse is possible from the spit that protects Collingwood Harbour. To get there, take 1st Street (Highway 26) in Collingwood east and then turn north on Heritage Drive and continue to its end where you will find a parking area.