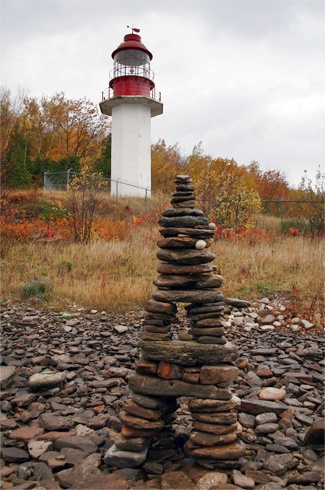 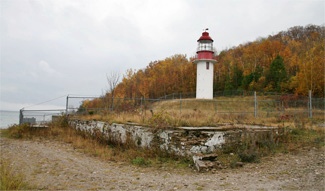 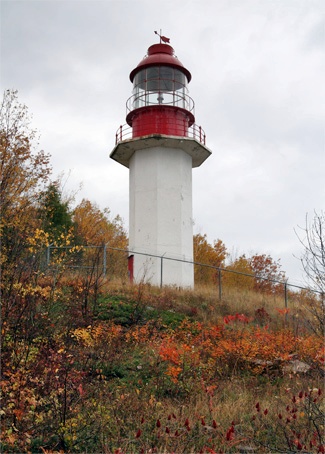 Located roughly midway between Cabot Head and the town of Owen Sound, Cape Croker is a prominent headland that mariners were advised to give a berth of at least 400 yards. On July 5, 1902, a light and fog alarm, described as follows by the Department of Marine, were placed in operation on the northeast extremity of the cape:

The combined lighthouse and fog alarm building is a wooden structure, surmounted by a square wooden lantern, and stands 65 feet back from the waters edge. It is 25 feet high from its base to the top of the ventilator on the lantern, and is painted white. The keepers dwelling, which stands 43 feet behind this building, is a rectangular wooden building, painted white.

The light is an occulting white light, visible for twenty-five seconds and eclipsed for five seconds, alternately. It is elevated thirty-one feet above the water level of Georgian bay, and should be visible ten miles from all points of approach by water. The illuminating apparatus is dioptric of the seventh order, and the illuminant a fifty-candle power incandescent lamp. In the event of the electric power at any time failing temporarily, a fixed white oil light will be shown until the occulting light can again be put in operation.

This is the first installation in Canada of an electric light and fog alarm operated by power developed in the lighthouse. The buildings were erected by Mr. Alexander Green of Owen Sound, whose contract price was $3,559; the gasoline engines and electric plant, which are in duplicate, were furnished by Mr. A. Trudeau of Ottawa, at a cost of $3,358.78.

Richard Chapman was hired as the first keeper of the lighthouse and fog alarm, and just a month after activating the light, he found that the electric machinery failed to work satisfactorily and was forced to temporarily exhibit a fixed white oil light. In 1903, the characteristic of the electric light was altered slightly to show a fixed light for twenty-three seconds followed by an eclipse of four-and-a-half seconds. That same year, a fog siren operated by compressed air replaced the electric fog horn. This new fog alarm sounded fifteen-second blasts separated by a silence of fifteen seconds.

A separate fog alarm building was built just south of the lighthouse, forty feet from the water, in 1905, and its diaphone fog signal commenced operation on July 20. The new building was painted white with a red roof, and the fog horn, elevated thirty feet above the bay, gave a five-second blast every minute as needed. The Canadian Fog Signal Company provided the fog alarm plant at a cost of $10,001.85, while the building was constructed under the supervision of W.H. Brunel for $4,225.56. A concrete-lined well was added to the station in 1908 along with a small dock for unloading coal and other supplies.

In 1909, the Forest City Paving and Construction Company of London, Ontario was paid $1,820 to erect the current octagonal, reinforced-concrete tower, which stands fifty-three feet tall from its base to the vane atop its circular lantern room. The new tower employed a third-order, Fresnel lens to produce a pair of flashes every five seconds. The illuminant at the time was petroleum vapour burned under an incandescent mantle.

The steam fog alarm plant was replaced by an oil plant in 1927.

Cape Croker Lighthouse was isolated from the rest of the Bruce Peninsula until Keeper Norman Whetton, who served from 1942 to 1965, spent two years building a road. After finishing his work at the station, Keeper Whetton would take his motorboat around the cape each day and spend a few hours clearing the next section of the road. One day, Whettons wife had to help him into the house, when he arrived at the stations dock with a severe case of sunstroke after having worked on the road. Once the road was completed, Keeper Whetton and his wife would drive to the station each April and depart each December, when the station was closed for the season.

Juanita Rourke, wife of Frank Rourke who tended the light at Cape Croker from 1965 to 1968, had the following poem published in a Department of Transport publication for Christmas 1966.

On The Light Before Christmas
Twas ten days before Christmas and all through the night
Snowflakes danced in the rays of Cape Crokers big light.
Santa jingled his bells up at the North Pole
While I scanned the road full of drifts and potholes.

The wilderness road that would take us from here
Had ruts deep enough to gulp Santas reindeer.
December was up to its usual tricks
And I thought, with a sigh, We are in a fix!

I sprang from my chair to view Georgian Bay -
The Seasons last freighter was passing our way.
There was one thing to do ere the end of the year -
Close up the station and get out of here.

Then in a flash, while the fog-horn did clatter,
I saw just the way to settle the matter.
All it would take- now, what was that word?
What we needed was a whirly-bird!

A chopper to sky-lift us over the bluffs
To avoid all the drifts, the potholes and ruts.
Oh for a helicopter, Saint Nicholas, please -
So we can be home for Christmas Eve!

Keeper John Adams, who served at Cape Croker from 1968 to 1979, recalled that one day while walking to the tower during an electrical storm he happened to look out on the bay just as a bolt of lightning struck a sailboats spar and then arced over to the fog alarm building. Adams raced into the building, grabbed the fire pump, and climbed into the attic where he managed to extinguish a fire before it caused extensive damage to the station. Fredric Jerome Proulx was the last keeper at Cape Croker, leaving the station in 1986 after six years of service.

The two-story residence and fog alarm building were demolished in 1975, and now all that remains at the station is the concrete light tower.

The Coast Guard removed the third-order Fresnel lens from the tower in 2007, as repeated vandalism was threatening its safety. After learning of the removal, the Bruce County Museum and Cultural Centre immediately entered into negotiations with the Coast Guard to gain custody of the lens. In early 2009, the museum learned it would be receiving the lens, and after a long-term lease agreement was signed, the Coast Guard installed the lens at the museum during the last week of February. The crowd gathered to witness the first official illumination of the lens in the museum stood in awe at the brightness of the light and the kaleidoscope of colors cast on the nearby walls. The one-story keepers dwelling had been removed from the station by 2008.

For a larger map of Cape Croker Lighthouse, click the lighthouse in the above map.

From Highway 6, just north of Wiarton, go east on Bruce Road 9. After 6.1 km (3.8 miles), turn right onto Bruce Road 18. After 5.2 km (3.25 miles), turn left onto Purple Valley Road. After 2.1 km (1.3 miles), turn right onto Coveneys Road. After 3.7 km (2.3 miles), Coveneys Road will become Port Elgin Bay Road. Continue for 3.7 km (2.3 miles) more until you reach the water, and then turn left onto Lakeshore Boulevard. Follow this road along the water for 3.5 km (2.2 miles), and when it ends, turn left onto Community Centre Road. Take your next right, Pit Road, the next left, Wilmers Road, and finally your next right, Lighthouse Road, which after 6.7 (4.2 miles) will end at Cape Croker Lighthouse.