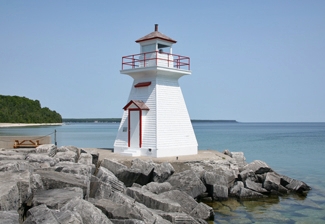 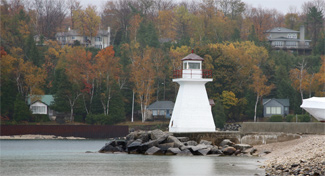 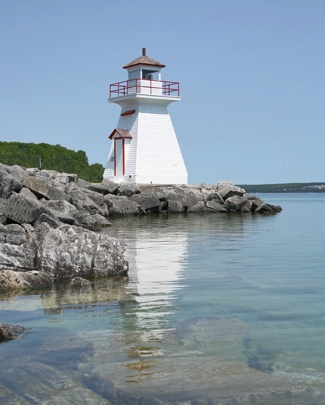 The village of Lions Head straddles the 45th parallel, meaning it is midway between the equator and the North Pole. Striking limestone cliffs, part of the Niagara Escarpment, are visible from the towns harbour, and one formation, about a mile east of the village, gave rise to its name. The rock's resemblance to the head of recumbent lion was at one time obvious, but erosion is slowly causing the likeness to fade away.

In 1875, the village of Lions Head consisted of only a post office and one store, the only store in the township, but just four years later, the village boasted several dwellings, two hotels, a grist mill, a saw mill, a blacksmith shop, and about 100 residents. A sandbar at the entrance to the villages harbour prevented its use until 1883, when the Canadian government dredged a thirteen-foot channel.

The first light to mark Lions Head Harbour, a square, tubular lantern hoisted atop a pole, was established in 1903 on the outer end of the breakwater at a cost of $197.16. This fixed red light, which had a height of twenty feet above the lake and could be seen for up to six miles, was first cared for by Charles Knapp, a former shoemaker, who received an annual salary of seventy-five dollars.

In 1913, J.C. Kennedy of Owen Sound was paid $825.22 to construct a square, pyramidal tower on the breakwater. That November, Hurricane-force winds accompanying the Great Storm of 1913 knocked the new tower off its perch. Recovered from the beach south of the harbour by John H. Tyndall, the tower was repaired and restored to a position on the pier by W.B. Lemont at a cost of $342.60.

It wasnt wind but rather fire that damaged the tower in 1933. In the end, however, it wasnt wind, fire, or water that did in the little lighthouse, but rather the Canadian Coast Guard, who dismantled the tower in 1969, burned its remains in the local landfill, and replaced it with a nondescript metal tower topped by a flashing light. Enraged by the unannounced destruction of their cherished lighthouse, locals pressed the Coast Guard for an explanation and were told that the old lighthouse was rotten beyond repair.

Using the plans for the original lighthouse, students at the Bruce Peninsula District School finished a replica in 1983 under the direction of teacher Brian Swanton and assisted with funds from the Lions Head Rotary Club. The students tower wasnt a replacement for the metal light tower on the breakwater but rather sat unlit on the nearby shoreline. Then in 2000, a violent spring storm damaged the metal pole, and the Coast Guard decided to replace it with the student-built replica. A proper functioning lighthouse proudly marked Lions Head Harbour again until a powerful storm in January 2020 demolished the tower. A piar of storms during the previous fall had damaged the lighthouse, but the winter storm swept it off its foundation and left it in numerous pieces.

Officials of Northern Bruce Peninsula immediately announced that they were committed to rebuilding the lighthouse. The municipality decided to accept donations and volunteer help so the local community could take ownership of the rebuild. A small team of volunteers, led by the now retired Brian Swanton along with Doug Hill, a local builder, worked during several weekends over the summer on the tower. On September 21, 2020, the four walls were lifted into place on a new foundation located roughly twenty feet back from its earlier location where it will not be as exposed.

For a larger map of Lion's Head Harbour Lighthouse, click the lighthouse in the above map.

From Highway 6 in Ferndale, roughly midway up Bruce Peninsula, turn east on Bruce County Road 9. When the road ends after 3.2 km (2 miles), turn left onto Main Street. Take your fourth right, which is Scott Street, followed by your first left, and then stay right to drive around the harbour to the dock area, where you will find Lion's Head Habour Lighthouse.

The lighthouse is owned by the Town of Lion's Head. Grounds open, tower closed.