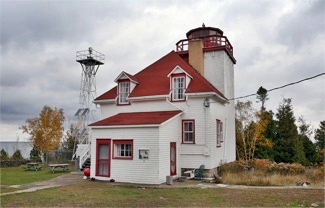 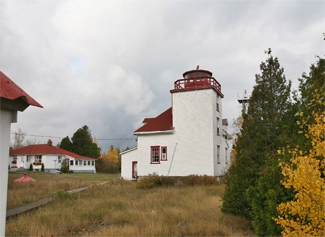 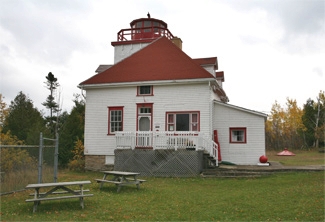 Cabot Head, named in honor of noted explorer John Cabot, was a known obstacle for vessels traveling the eastern coast of the Bruce Peninsula to ports such as Owens Sound, Collingwood, and Midland, but partly due to its isolation, it didnt received a lighthouse until the late nineteenth century. A lighthouse had been constructed on Griffith Island off Colpoys Bay in 1858, and Tobermory received a lighthouse in 1885, but the roughly sixty-mile-long sail between these points was unmarked.

The Department of Marine and Fisheries called for bids for the construction of a lighthouse and fog alarm at Cabot Head in July 1895, and by the following spring, John George of Port Elgin and Richard Webb of Southampton had the station ready for service. The lighthouse consisted of a two-story, wooden dwelling with a forty-nine-foot tower rising from one corner, and a square, wooden fog alarm building was built on an outcropping roughly 200 feet east of the lighthouse. Boilers manufactured by Carrier, Lainé & Company, of Lévis, Quebec were used to energize the duplicate steam-powered horns that projected from a gable on the northeast side of the building.

The first keeper of Cabot Head Lighthouse was William Campbell, and he activated the light for the first time on the evening of May 18, 1896. The beacon was a complex affair, consisting of several sets of parabolic metal reflectors and kerosene lanterns set in a frame. This apparatus, provided by the Chanteloup Company of Montreal, was revolved once in eighty seconds by a clockwork mechanism to produce three flashes of light separated by twenty seconds with the group of flashes followed by an eclipse of forty seconds. The light was elevated eighty feet above Georgian Bay and could be seen for up to fourteen miles from all points of approach by water. The total cost of the station came to $7,473.59.

In the early years, the appointment of lighthouse keepers was highly political, and when the Liberal Party, led by Wilfrid Laurier, won the majority of seats in the federal election of 1896, Keeper Campbell, a conservative, lost his job to Samuel J. Parke.

A fire destroyed the wooden fog alarm building in August 1907. J.C. Kennedy of Owen Sound built a new one at a cost of $2,463, and a duplicate twelve-horsepower, three-inch diaphone plant was purchased from the Canadian Fog Signal Company and installed for $8,100.

Just west of the lighthouse is Wingfield Basin, a protected natural harbour whose use was initially limited due to a shallow bar across its entrance. In 1914, the harbour was dredged, and a pair of range lights was established on its shores to guide mariners into the protected anchorage. Care for these range lights was added to the responsibilities of the keeper at Cabot Head. In 1915, a sixty-foot tower was established next to the lighthouse, and the keeper was required to fly storm warnings received from Toronto via a temperamental telephone line strung to the station that year.

Following World War I, preference was given to veterans when appointing new keepers, and Howard Boyle, who enlisted in the Canadian Overseas Expeditionary Force in 1916, was placed in charge of Cabot Head Lighthouse in 1926. Prior to the war, Howard was a butcher, but he was working as a farmer before becoming a lighthouse keeper. Keeper Boyle and Clara Jean, his wife, cultivated a vegetable garden, which they fertilized with scrap fish from the Meneray fishery on Wingfield Basin, and they also kept chickens, pigs, and a cow. In his free time, Keeper Boyle beautified the station grounds with stone walls, lilac bushes, and flowers. One significant change made during Boyles service was the replacement in 1929 of the stations group flashing white light with a beacon that produced a single white flash every twenty-five seconds.

Harry Hopkins replaced Howard Boyle as keeper in 1951 and would remain at the station for thirty-one years. Howard and Ruth Boyle raised nine children, whose names all started with a K or C. Mrs. Boyle recalled that when she first arrived at the station she had a wood cook stove and had to draw water from the bay by sliding a pail along a wire that angled down to the water from their cliff-top residence and then pulling it back up with a rope.

The station at Cabot Head had to be serviced from supply ships anchored offshore until a trail was cut through the woods just north of Gillies Lake. A proper gravel road was extended to the station from Dyers Bay in the early 1960s.

A separate residence for the head keeper and his family was constructed in 1958, and in 1971, the light was transferred to a skeletal tower erected near the lighthouse after electricity reached the station. The lantern room atop the lighthouse was removed at this time so it wouldnt block the new light. Brent Skippen replaced Harry Hopkins as keeper in 1981 and served until 1988, when the station was fully automated.

Local citizens, concerned about the future of the lighthouse, organized the Friends of Cabot Head to restore, maintain, and manage the property, and they received a two-year lease for the station in 1993. By the time the light celebrated its hundredth anniversary in 1995, the Friends had installed a new lantern room atop the lighthouse and opened the structure to the public. The lantern room is intentionally a bit squat so that it doesnt interfere with the active light atop the skeletal tower.

A full-time, on-site manager lives in the 1958 residence, but one or two people can sign up to stay in the lighthouse for one-week tours of duty as part of a Lighthouse Assistant Program. Funding for the lighthouse comes through this program, entry fees, membership dues, and purchases made at the Light Keepers Locker gift shop. An earlier beacon from the tower is on display in the lighthouse.

Cabot Head Lighthouse closed to the public in 2017 to receive a $1.3-million makeover that would remove toxic lead paint and other contaminants and reface the structure. The road to the lighthouse was closed in 2020, but federal money is being sought to make the repairs necessary to reopen it.

For a larger map of Cabot Head Lighthouse, click the lighthouse in the above map.

Note that due to mercury contamination the lighthouse closed in 2017 and the road to the lighthouse is closed for repairs. From Highway 6, about midway up Bruce Peninsula, go east on Dyers Bay Road for 9.4 km (5.9 miles) until you reach the shore of Georgian Bay and the village of Dyers Bay. Follow the road along the shore for 11.2 km (7 miles) until it ends at Cabot Head Lighthouse.

The Light Station is open daily from May through October between 10 a.m. and 7 p.m. Admission by donation. A Lighthouse Assistant Program allows one or two "keepers" to stay in the lighthouse for a week during the summer and help greet guests and care for the structures.

The lighthouse is owned by Ontario Parks and managed by Friends of Cabot Head. Grounds open, tower open in season.