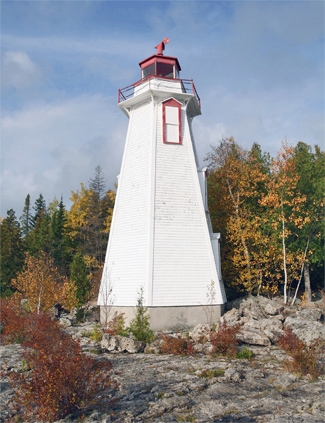 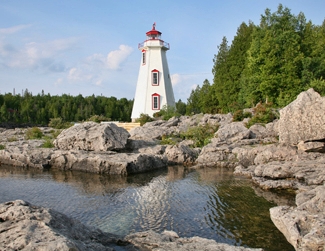 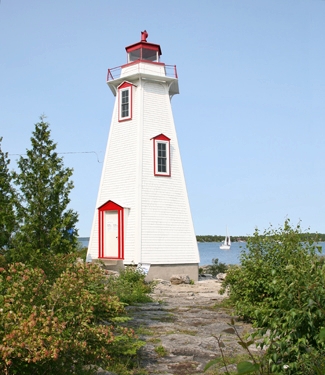 Charles Earl and Abraham Davis were the first permanent settlers of Tobermory, the town situated at the northern tip of the Bruce Peninsula. As shipping into the natural harbour at Tobermory developed due to fishing and logging, Charles Earl hung a lantern on a tree branch at night to guide vessels through the dangerous passageways that lead to the harbour. According to a Departmental Letter dated January 28, 1881, Earl was allowed $100 each year for keeping a light at Tobermoray Harbour.

The Commissioners of Public Works made the following recommendation for a formal light at Tobermory in 1857, but the harbour remained dark until Charles Earl started displaying his light in 1881:

But a third or fourth rate light at Tobermoray would be of considerable use. At this place, which is situated at the extreme north end of the Indian Peninsula, there is a small harbour frequently used as an asylum in bad weather by the steamers and other vessels on the Georgian Bay route. The entrance to it is difficult for a stranger to discover, owing to the sameness of the shore. When in, vessels lie in a basin about half a mile long by three hundred feet wide, the sides nearly perpendicular with from 20 to 25 feet of water alongside.

In 1885, three lots on the west side of the entrance to Tobermory Harbour, also known as Big Tub Harbour, were purchased by the Department of Marine at a cost of eighteen dollars for the erection of a lighthouse. That same year, John George and David Currie of Port Elgin constructed a wooden tower for $675 on the point where Charles Earl had previously tended his lantern.

The Annual Report of the Department of Marine for 1885 provides the following description of the lighthouse: A light on the west side of the entrance to Tobermory Harbour, Georgian Bay, in the North Riding of Bruce. From the opening of navigation next season a fixed red dioptric light will be shown, elevated 40 feet above the level of the lake, and visible 8 miles from all points of approach. The tower is a hexagonal wooden building, surrounded by an iron lantern, having a height of 43 feet from ground to lantern vane.

Abraham Davis was appointed keeper of the lighthouse in 1885, replacing Charles Earl, who was in temporary charge of the light. Davis held the position of keeper for ten years, until he disappeared in 1895. The Kingston News of November, 9 provides some detail on his demise: On Wednesday night at about ten oclock, A. Davis, light-house-keeper here, left for the scene of the wrecked vessels Owen Sound and Worts in a small skiff, telling his wife he would return about 3 a.m. Davis has not since been seen or heard from, and it is feared he has been drowned.  Searching parties are now out, but have little hope of finding him.

Flora Davis, Abrahams widow, applied for the position of keeper, providing the following endorsement signed by an assortment of mariners, farmers, engineers, lumbermen, as well as a traveler, labourer, and a minister:

she is thoroughly competent and reliable, having performed all the duties for the past five or six years, as her husband was well advanced in years [and] also enjoyed poor health. The light has been faithfully kept and with great satisfaction to all. We therefore humbly pray that you will give her the appointment and we will every pray.

Alex McNeill, the local Member of Parliament, recommended appointing Henry. B Davis to fill his fathers role and cautioned against giving the position to Davis widow. ..while the poor old woman Could be and I believe has been very useful in helping to trim the lamps, McNeill wrote, I should very much question the advisability of appointing her Lightkeeper.

The Department of Marine appointed Henry Davis keeper of the light, noting that it was against regulations to place a woman in such positions. In his acceptance letter, Henry Davis noted that the lighthouse neads a man theare that can handle a Bot.

In 1898, a local official complained to the Department of Marine that Keeper Davis was farming out the work of looking after the light and asked that he be forced to resign. Keeper Davis first professed his innocence, writing I hav never went from the light at any time that I cad not return in 30 minets, but a few days later he submitted his resignation: my der sir I find that thear are partes that crave for me letle offer So I will resine and give up kepen the lite also I will recemend if you will give the light to mr henry marten he is a trustworthy man he has keep the light for me when I was away.

The department took no action until 1901, when Patrick Harty, Superintendent of Lights, visited Tobemory Lighthouse and submitted the following report:

Keeper Davis was dismissed, and Daniel Butchart was hired in his stead. Amazingly, the department granted Butcharts request to have Martin attend the light for the rest of the 1901 season so that he could fish, but when Superintendent Harty found Henry Martin keeping the light in 1902 and that the light was suffering for the want of a keeper in 1903, Butchart was sacked.

As the keeper was paid just $150 a year and was provided only an old cow shed as his accommodations, it isnt surprising that the department had difficulty in finding a reliable keeper. Archibald Currie was hired as keeper in 1903 at a salary of $250, and two years later a new frame keepers dwelling, measuring thirty-two feet by sixteen feet, nine inches, was erected near the lighthouse, but these perks still were not enough to entice the keeper to remain at the station. In 1907, the department received a letter claiming that Keeper Currie did not live in the new dwelling but rather slept at his farm after having lit the light and also kept the local post office during the day. A local official defended Currie, claiming that he had to tend a farm or his family would starve on his meager salary. A hand foghorn, which was sounded in response to a signal from nearby vessels, was given to Keeper Currie in 1910.

Currie managed to hang on to his position until 1912, when he was replaced by John H. Smith, a Baptist fisherman from St. Catharines. During an inspection in July 1914, Smith was actually present at the station, something that had rarely occurred with previous keepers, and that September the station was found to be in first class order. In 1926, eighty-year-old Smith, who was too ill to care for the light, resigned his position  another first for the station as the previous keepers had been dismissed or died in office.

The final keeper of Tobermory Lighthouse was Thomas Andrew Hopkins, a veteran of World War I, who served from 1926 until the light was electrified and automated in 1952. During Hopkins service, the towers light was improved in 1929 by upgrading the illuminating apparatus from a seventh-order lens to a fourth-order lens.

In 1985, Friends of Fathom Five created a pathway to and a viewing area around the lighthouse. Repairs to the lighthouse itself were required in 1987 when a powerful winter storm washed away part of the foundation along with some of towers shingles.

In 2012, residents of Tobermory petitioned the federal government for ownership of their lighthouse, which was declared a recognized federal heritage building in the early 1990s and is known affectionately as Big Tub Lighthouse. The lighthouse was one of many made available under the Heritage Lighthouse Preservation Act, which allows individuals, communities, and non-profit organizations to acquire lighthouses and protect their heritage character. The outcome of the communitys petition will be known by May 29, 2015.

For a larger map of Tobermory (Big Tub) Lighthouse, click the lighthouse in the above map.

Take Highway 6 to Tobermory on the northern tip of Bruce Peninsula. When the road ends, turn left onto Big Tub Road and follow it around Big Tub Harbour for 2.24 km (1.4 miles) to its end, where you can park and walk a short distance to Big Tub Lighthouse.


If you plan on going out to Flowerpot Island, I would recommend taking a boat that includes a tour of Big Tub Harbour. Besides getting some great views of Big Tub Lighthouse, you will also see its keeper's dwelling, which is hard to see from anywhere else, along with some amazing views of shipwrecks, thanks to the harbour's clear water.