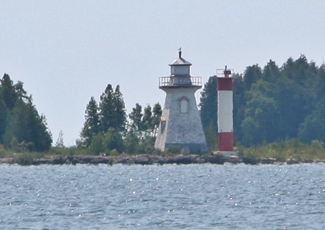 Located midway up the Lake Huron side of the Bruce Peninsula, Stokes Bay provides a desirable anchorage but is littered with islands and reefs. Almost two kilometers in length, Lyal Island is the largest of these islands and guards the entrance to the bay. A wooden lighthouse was erected on the western shore of Lyal Island in 1885 to guide mariners along the coast and into Stokes Bay. This tower stood 17.3 meters (57 feet) tall and was first watched over by Captain John McKay. After the tower was automated in 1959, it fell victim to vandals and was replaced by a steel tower in 1973.

In 1904, a pair of range lights was erected in Stokes Bay to help guide vessels between Lyal Island and Mad Reef, replacing a pair of day beacons that had previously served this function. The front range light was placed on the northwestern end of the largest of the Knife islands, while the rear range light was located on the mainland east of the front light. The following description of the new range appeared in the Annual Report of the Department of Marine for 1904:

Range light buildings have been erected as indicated in last years report at Stokes bay on the east shore of Lake Huron, and the lights were put in operation on or about the 25th August, 1904.

The front tower stands upon the northwest extreme of the most westerly of the Knife islands, a group of small islands lying 1/2 mile north of the northeast point of Lyal Island, and stands upon the site of the front one of a pair of day beacons which have been taken down.

The tower is a wooden structure, square in plan, with sloping sides, surmounted by a square, wooden lantern, the whole painted white. It is 33 feet high from its base to the top of the ventilator on the lantern.

The light is a fixed white light, elevated 30 feet above the level of the lake, and should be visible 10 miles in the line of range. The illuminating apparatus is catoptric.

The back tower stands upon the mainland on the east shore of the bay, on the site formerly occupied by the back beacon. It is distant 4,250 feet, N. 74° E. from the front tower.

The tower consists of a skeleton steel frame, square in plan, with sloping sides, surmounted by an inclosed wooden watch room and a square, wooden lantern. The steel frame is painted brown and the woodwork white. The tower is 64 feet high from its base to the ventilator on the lantern.

The light is a fixed white light, elevated 61 feet above the level of the lake, and should be visible 13 miles in the line of range. The illuminating apparatus is catoptric.

These buildings were erected by days labour, under the superintendence of Mr. W. K. Morris, of Ottawa, and cost $2,641.12.

D.L. McLay served as first keeper of the range lights until he died of heart failure in 1908 and was replaced by Alexander Smith. Norman McDonald, who served in the first battalion of the Canadian Expeditionary Force in World War I and lost his left leg in the battle at Amiens on August 30, 1918, was the longest-tenured keeper of the range lights, caring for them from 1920 to 1956.

In the 1990s, the wooden square pyramidal tower that had served as the front range light was replaced by a cylindrical tower. Fortunately, the old tower was not torn down, but the abandoned structure faces an uncertain future. The Bruce Peninsula Lightkeepers Association has been formed to save the front range lighthouse. The group is raising funds to restore the tower and in October 2012 submitted a grant application to the Ontario Trillium Fund.

In late summer 2009, the Canadian Coast Guard informed Bruce County of its intention to replace Stokes Bay Rear Range Lighthouse, which consists of a three-tiered, tapered steel frame, surmounted by a wooden watchroom and lantern. Not willing to lose part of its marine heritage, the county quickly devised a plan wherein a heavy-lift helicopter, owned by National Helicopters in Vaughn, Ontario, would transport the lighthouse in two pieces to the parking lot of Black Creek Provincial Park where it would be loaded on a heavy equipment float and trucked to Southampton. A YouTube video of the removal of the lighthouse, which took place in December 2009, is available. After volunteers reassembled and restored the lighthouse using traditional paint and craftsmanship, a celebration was held at the Bruce County Museum and Cultural Centre in June of 2011 to celebrate the opening of its new Stokes Bay Lighthouse exhibit. The upper portion of the lighthouse stands in the museums backyard overlooking Fairy Lake.

The front range light is located on the northwest extreme of the westernmost Knife Islands.
Latitude: 44.96711, Longitude: -81.39051

For a larger map of Stokes Bay Range Front Lighthouse, click the lighthouse in the above map.

At the intersection of Highway 6 and County Road 9 on Bruce Peninsula, turn west onto County Road 9. After 4 km (2.5 miles), turn right on Stokes Bay Road and continue 4.6 km (4 miles) to the town of Stokes Bay. In Stokes Bay, turn left onto Stokes River Road, and when it ends after 0.64 km (0.4 miles), turn right onto Tamarac Road. Stay on Tamarac Road for 2.4 km (1.5 miles) by always staying left, and you will reach Tamarac Island from where you can get a distant view of the range lights. Note that in 2009 the rear tower was replaced by a modern structure.

The range lights are owned by the Coast Guard. Grounds open, tower closed.