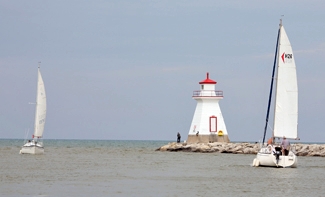 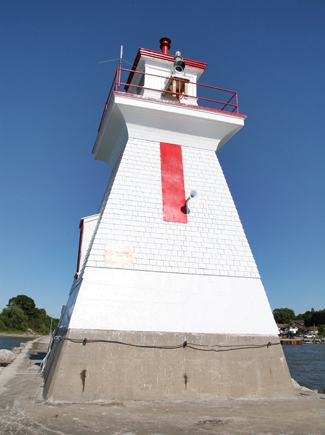 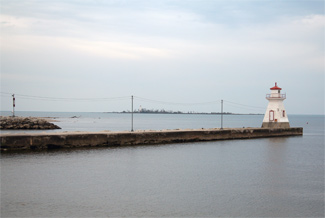 A light at the entrance to Saugeen River was established in 1883, when a lantern hoisted atop a mast was placed on a crib built fifty feet from the outer end of the breakwater pier on the north side of the mouth of the river. Murdoch McLeod was appointed the first keeper of the light at an annual salary of eighty dollars. The green dioptric light, which was intended to guide fishing boats into the river, was exhibited thirty feet above the high water mark and could be seven for seven miles from all points of approach. In 1893, the light was improved by substituting a seventh-order Chance anchor lantern for the original small pressed lens. The new light was white and could be seen at a distance of ten miles.

Keeper McLeod purchased a house and outbuildings near the light, but the land on which they stood turned out to be owned by the Department of Indian Affairs. The Department of Marine intervened in 1886 and helped McLeod purchase the land for fifty dollars. In December 1897, the Department of Marine recommended that Keeper McLeods services be dispensed with for insubordination and refusal to submit to discipline and to obey the instruction of the Inspector of Lights. This matter must have been resolved amicably, as it appears that Keeper McLeod was in charge of the light until his passing in February 1899, when his wife was giving the customary gratuity of two months salary, amounting to $13.33

Around 1900, local fishermen established a fixed green light roughly 700 feet inland from the governments light to form a range for entering the river. This privately maintained light shone at a height of forty-five feet above the water.

In 1903, the government assumed control of the rear range light and built enclosed towers for the lights as explained in that years Annual Report of the Department of Marine:

The maintenance of the back range light at the mouth of Saugeen river, established as a private light, has been assumed by this department, and the range has been improved by substituting for the lanterns on masts heretofore used enclosed lighthouse towers.

The towers are wooden buildings, square in plan, with sloping sides, surmounted by square, wooden lanterns, the whole painted white. Each tower is 31 feet high from its base to the top of the ventilator on the lantern.

The front tower stands on a cribwork block, built on the breakwater on the north side of the mouth of the river, and is distant 40 feet from the extremity of the breakwater.

The light shown from this building is fixed green (instead of the fixed white light shown from the mast). It is elevated 36 feet above the level of the lake, and should be visible 4 miles from all points of approach by water. The illuminating apparatus consist of a pressed glass lens.

The back tower stands on the point formerly occupied by the mast from which the back light was shown, on the hillside near the inner extremity of the breakwater, 700 feet inside the front light.

The light is a fixed green light, elevated 49 feet above the level of the lake, and should be visible 4 miles in and over a small arc on each side of the line of range.

The work was done under contract by Mr. John McAulay. His contract price was $1,085.

The back range lighthouse was moved 1,650 feet east along the line of the range in 1907 and placed on a stone foundation atop the crest of the ridge of the north bank of the river. In its new location, the rear tower was 2,350 feet from the front light, and the light had an elevation of sixty-one feet above the lake.

At the opening of navigation in 1913, the color of the light exhibited by the range towers was changed from fixed green to fixed red, and later that year, the lights were improved by substituting a fifth-order lens in the front tower and a reflector in the rear tower.

The range lights were electrified in 1939, and an electric tyfon horn, which sounded a two-second blast every ten seconds, was placed in the front tower in lieu of a hand horn that the keeper had sounded in response to a vessels signal. A steam fog whistle was established in 1905 atop Southamptons yellow-brick waterworks building a short distance south of the river entrance, but this was discontinued in 1936 when the keeper of the range lights was given a hand horn.

The rear tower was the center of a town controversy in 1989, when unannounced the Coast Guard initiated work on its plan to strip the wooden shingles from the tower and replace them with strips of aluminum siding. Not wanting to lose the historic nature of the tower, local citizens held an around-the-clock protective vigil for three days until the Coast Guard abandoned their plan.

On August 3, 2012, the Honorable Peter Kent, Canadas Environment Minister and the person responsible for Parks Canada, designated the Saugeen River Range Lights and McNab Point Lighthouse in Southampton, and St. Paul Island Southwest Lighthouse in Dingwall, Nova Scotia the first heritage lighthouses designated under the Heritage Lighthouse Protection Act of 2008. Im delighted to feature these four noteworthy examples of Canadian lighthouses as our first designated heritage lighthouses, said Minister Kent. With the help of local communities, the Government of Canada hopes to protect as many examples of these important symbols of our seafaring heritage as possible. Concerned citizens have demonstrated their determination to preserve the Saugeen River Range Lights and are worthy of having the towers being recognized as Canadas first heritage lighthouses.

For a larger map of Saugeen River Range Front Lighthouse, click the lighthouse in the above map.

In Southampton, take Highway 21 to the north side of Saugeen River Bridge, and then turn west onto S. Rankin Street. After a short distance, there will be a parking area on your left from which you can access the pier that leads to Saugeen River Front Range Lighthouse.

The lighthouse is owned by the Town of Saugeen Shores. Grounds open, tower closed.