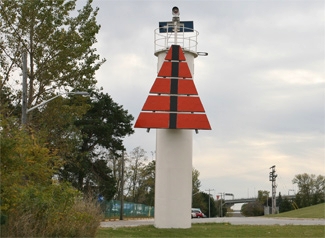 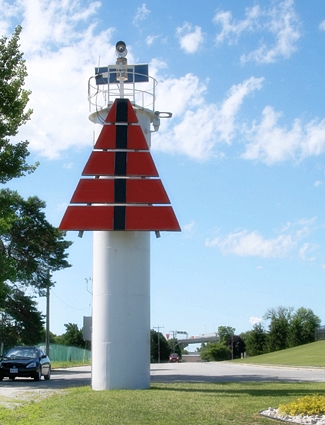 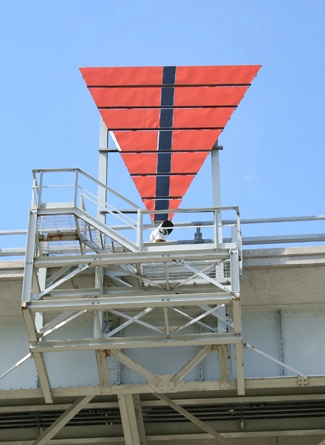 A pair of private range lights was maintained at Point Edward, near the confluence of Lake Huron and the St. Clair River, by the Lake Carriers Association until 1899, when the lights were discontinued and removed from the Canadian list of lights and fog signals. Four years later, the Canadian government built a pair of range lights to guide mariners between the lake and river along the axis of a channel dredged by the U.S. government. The lights were placed in operation on September 1, 1903 and described as follows:

The towers are wooden structures, square in plan, with sloping sides, surmounted by square wooden lanterns, the whole painted white.

The front tower stands on the beach. 107 feet back from the water's edge. The height of the tower from its base to the top of the ventilator on the lantern is 34 feet. The light a fixed red light, elevated 35 feet above the level of the lake, should be visible 7 miles from all points of approach by water. The illuminating apparatus is dioptric of the seventh order.

The back tower stands on the same beach, 579 feet from the front tower. The height of the tower from its base to the top of the ventilator on the lantern is 54 feet. The light is a fixed red light, elevated 58 feet above the level of the lake and should be visible 8 miles in the line of range. The illuminating apparatus is catoptric.

A fifth-order French lens was placed in the front range tower in 1909, but on April 18th of the following year, the wooden lighthouse was struck by lightning and destroyed. A temporary light was shown from a lantern hoisted atop a pole until the Department of Marine had a new tower in place about a month later.

In 1939, the back range light was established on the new International Bridge between Sarnia and Port Huron, where it was 2,266 feet from the front light. The current cylindrical concrete tower used for the front light was erected in 1959.

For a larger map of Point Edward Range Lighthouse, click the lighthouse in the above map.

From the last entrance to Highway 402 before Blue Water Bridge, go north on Front Street until it ends and then turn left onto Victoria Avenue. After eight blocks, turn right onto Fort Street and continue to its end where you will find the front range light. The rear range light is mounted on Blue Water Bridge.

The lights are owned by the Canadian Coast Guard. Grounds open/tower closed.


These modern range lights might not be much to look at, but if you stick around the area for a while you are likely to see a couple mighty freighters pass by. I spent an extra hour or so along the waterfront and saw the CEDARGLEN and AMERICAN CENTURY headed upbound from St. Clair River into Lake Huron. You can look at a map on Boatnerd.com to help you track the position of approaching ships. The water here has some amazing blue hues in it - easy to see why the bridge passing overhead is named Blue Water Bridge.