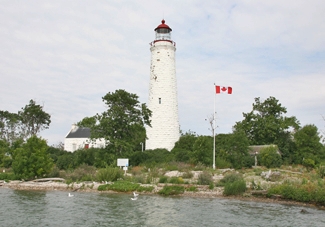 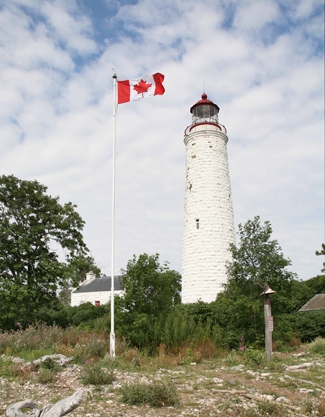 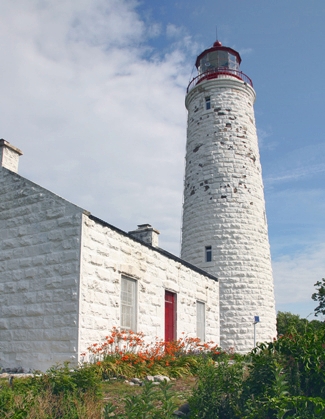 Situated roughly one kilometre offshore from Southampton, Chantry Island helps to provide a protected anchorage for mariners and was recommended as a site for one of the first Canadian lighthouses on Lake Huron. The Commissioners of Public Works of the Province of Canada included the following in their general report for 1852  1853:

Based on feedback from Captain MacGregor of the Gore Steamer and others familiar with Lake Huron, the commissioners recommended the establishment of nine lights, including one on the northeast point of Chantry Island. As a further aid to marines, the commissioners noted that a pier of about 500 feet in length from Chantry Island towards the main shore, would be of important service, in forming a Harbour, to meet the wants of that section of country, which is rapidly being settled.

In 1855, the Commissioners of Public Works contracted with John Brown, a builder from Thorold, to construct eleven stone lighthouses and associated keepers dwellings on Lake Huron and Georgian Bay, but only six of these, known now as the Imperial Towers, were built at that time. Work on three of these towers, those at Nottawasaga Island, Cove Island, and Chrisitan Island, began in 1855, and £7,000 was appropriated for the construction of a breakwater connected to Chantry Island to form an excellent asylum harbour for vessels to make for in bad weather.

During 1856, the construction materials for the dwelling on Chantry Island were prepared, the shaft of the tower was carried up to within ten feet of its full height, and the breakwater was completed. The commissioners noted that the breakwater withstood the heavy storms to which it was exposed last fall, without sustaining any damage, and the amount of shelter and other benefits already derived from it, although carried out to a very limited extent, establishes the fact beyond doubt that if an additional length of from 1000 to 1500 feet of break-water is constructed, a most valuable and capacious asylum would be created.

A temporary fixed light was established atop the lantern-less tower in 1857, and a lantern room and second-order Fresnel lens, manufactured in Paris, France, were finally installed atop the tower in time for the light to be exhibited at the opening of navigation in 1859. The height from the base of the tower to the centre of the light was eighty feet, and the light had a focal plane of eighty-six feet above the lake. Built of limestone with courses of granite near the top to support the heavy lantern room, Chantry Island Lighthouse has walls that taper from a thickness of six feet at the ground to two feet at the top.

Robert Mills cared for the towers temporary light for a season before Duncan McGregor Lambert, who had many years of maritime experience, took charge of the light in 1858. In 1854, Lambert was first mate aboard the steamer Bruce Mines, when it sank near Stokes Bay, and was largely responsible for ushering the crew into two small boats and safely seeing them to Owen Sound, a voyage of over a hundred miles.

Spermaceti oil was burned in the towers lamps until colza oil, which remains limpid at a very low temperature and was less apt to clog the mechanical lamps, was introduced in 1860. Keeper Lambert had a family of six on the island, and in 1876 the inspector noted that his lighthouse was the best kept on the upper lakes. In 1877, a pyramidal, trelliswork lighthouse, which was twelve feet square at its base and topped by a four-foot-square iron lantern, was established at the end of the breakwater extending from Chantry Island and placed under the care of Keeper Lambert, whose salary was augmented $75 for the extra work. The breakwater light was produced by a mammoth flat-wick lamp set in a seventeen-inch reflector and when aligned with a tower on shore formed a range for mariners to safely enter the sheltered anchorage.

On September 4, 1879, the scow Mary and Lucy foundered on a reef south of Chantry Island. Lying safely in the harbour, the crew of the steamer Quebec witnessed the accident and lowered a boat to help those stranded on the reef. En route to the reef, the boat overturned multiple times, and two of the would-be-rescuers drowned. One of these was twenty-three-year-old Duncan Ross Lambert, the eighth of Keeper Lamberts eleven children, who clung to a pair of oars before slipping beneath the waves. Ironically, all aboard the Mary and Lucy reached shore safely.

Keeper Lambert retired in 1880, after twenty-two years on Chantry Island, and was replaced by his son William, who had served as his assistant starting at the age of fifteen and became the youngest captain on Lake Huron at the age of nineteen. Duncan Lambert passed away in May 1883 at the age of seventy-three, and inscribed on his tombstone is Safely anchored in the harbour of eternal rest.

William Lambert was in charge of the lighthouse for twenty-seven years, making the Lambert familys service on the island span nearly a half century. When Keeper William Lambert stepped down in 1907, he received the Imperial Service Medal for his twenty-five-plus years of meritorious service that included numerous rescues. During the night of August 31, 1892, the schooner Nettie Woodward capsized while trying to make Southampton Harbour in heavy seas. Two men drowned, but the captain and two other sailors clung to the wreck until daybreak, when they were spotted and rescued by Keeper Lambert. For his efforts, the Canadian government awarded Lambert a gold watch.

Perhaps the most gallant rescue of Keeper Lamberts career came on September 1, 1906. During the previous night, the schooner Cavalier of Sarnia wrecked near the island, leaving Captain John Glass, four seamen, and a female cook at the mercy of the sea. The schooners yawl boat was lost early in the evening followed later by thirty feet of the ships stern, which was wrenched away by waves. Under the direction of Captain Glass, an escape raft was constructed during the night, but the rest of the schooner managed to hold together, and the following morning, Keeper Lambert discovered the wreck and launched his small boat in heavy seas. Within an hour, Lambert had transported everyone safely to the island, an act for which he would later receive a medal for bravery from the Royal Canadian Humane Association. The awards Captain Lambert received are recorded on the side of his tombstone in the cemetery at Southampton. Louisa Jane Lambert, Captain William Lamberts sister, painted this scene of Captain Lambert rowing his dory in high seas to rescue shipwreck victims.

Jean Davies was a friend of Keeper John Klipperts daughter Ruth and often visited the station in the 1930s. In an interview for Focsle Magazine, Mrs. Davies remembered the hard work required of Keeper Klippert at the station. Every night  it wasnt electrified then  we had to climb to the top to light the light. He had to pump it up and light the gas. Of course, there were beautiful prisms as I recalled, and when we climbed to the top, hed say: Now you girls keep your fingers off that glass. He was meticulously clean. Then we would light it. It would just flame when it would light. He also had a range light he had to light, on the end of the dock at the end of the island. It was a long way to go. He had an old bicycle and hed get on it and pedal away down on those boards and out onto the old dock to light the light. I feel really blessed. I have such happy memories.

Jean Davies wasnt the only guest staying in the stone keepers dwelling. They had bats in that house! she recalled. Oh! I spent half my weekends running around with a broom batting down bats. Ruth would have a broom, and I would have one and old John would have one. I remember the time we knocked over a lamp, which wasnt very good.

Chantry Island Lighthouse was automated in 1954, and three years later the island was declared a Federal Migratory Bird Sanctuary. When Jean Davies returned to her childhood vacation spot after being absent from the island for many years, the condition of the keepers dwelling made her heart sick. With no upkeep, the dwelling roof, and a good portion of its walls and floors had all collapsed.

In 1998, the Supporters of Chantry Island, now known as the Southampton Marine Heritage Society, was formed to work towards the restoration of the light station. The society has raised over $600,000 as of 2008 and has restored and furnished the keepers dwelling, rebuilt the boat house, restored the privy, and planted historic gardens.

The wood required to rebuild the dwelling was not commercially available in the area, so thirty-one giant hemlock trees were harvested, milled, and transported to the island. Bill Robinson, a mason, rebuilt the walls of the dwelling, and the hemlock lumber was used to construct a new loft, floors, and the roof.

A grand opening for the restored keepers cottage was held on the island in August 2001, after more than 250 volunteers had put in over 300,000 hours of labor. Besides caring for Chantry Island Lighthouse, the Marine Heritage Society watches over the Saugeen Range Lighthouses and McNab Point Lighthouse, which was restored in 2008.

For a larger map of Chantry Island Lighthouse, click the lighthouse in the above map.

The lighthouse is visible from the end of Beach Street in Southampton. The island is part of a bird sanctuary, so access is limited. Tours to the island are offered by Marine Heritage Society during the summer and can be arranged by calling (519) 797-5862. The society manages the lighthouse property and has led the effort to restore the structures.

The lighthouse is owned by the Coast Guard and leased to the Town of Saugeen Shores. Grounds/tower open for guided tours.